After decades of searching, physicists at Princeton University say they've observed an elusive particle that behaves both like matter and antimatter.

Yes, the discovery is an exciting step forward for particle physics, but it may also help advance the creation of powerful quantum computers.

In the early 20th century, as quantum theory emerged, scientists predicted that most common particles, like electrons, had mysterious "antimatter" counterparts with the same mass and opposite charge. Scientists even thought that if a particle came in contact with its "antiparticle," the two would annihilate one another.

Italian physicist Ettore Majorana first hypothesized in 1937 that one particle -- called the "Majorana fermion" -- could serve as its very own antimatter particle, and scientists have been searching for that particle ever since. 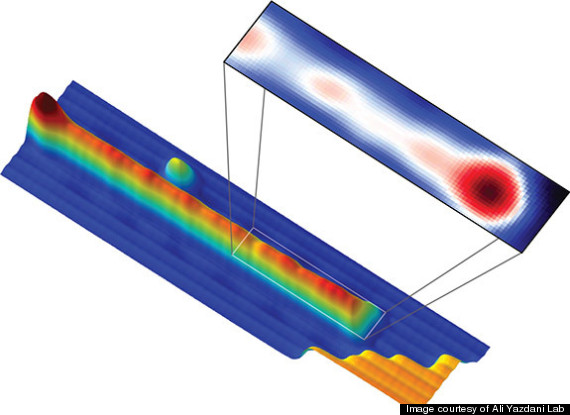 An experiment revealing the atomic structure of an iron wire on a lead surface. The zoomed-in portion of the image depicts the probability of the wire containing the Majorana fermion. The image pinpoints the particle to the end of the wire, which is where it had been predicted to based on years of theoretical calculations.

For their study, the Princeton researchers designed a simple experiment to observe what they call "emergent particles" which can be found within a material -- rather than in the vacuum of a giant collider, where the Higgs boson was discovered.

"This is more exciting and can actually be practically beneficial," Ali Yazdani, a physics professor at the university who led the research team, said a written statement, "because it allows scientists to manipulate exotic particles for potential applications, such as quantum computing."

The researchers placed a thin, long chain of pure magnetic iron atoms on a superconductor made of lead. Then they cooled the materials to -457 degrees Fahrenheit and peered at them through a two-story-tall scanning-tunneling microscope. Just check out the video above.

What did the researchers find? An electrically neutral signal at the ends of the iron wires, which is considered to be the "key signature" of the elusive Majorana fermion. The researchers say the fermion's observed properties make it a good candidate for building quantum bits in computers.

"One of the first steps in making a quantum computer is to make a quantum bit," Yazdani said in an email to the Huffington Post, "The ideal quantum bit should [be] one that you can control but it does not interact with its environment, so as to be changed."

While other scientists find the study intriguing, many believe further research should be conducted to confirm the results.

“We should keep in mind possible alternative explanations -- even if there are no immediately obvious candidates,” Jason Alicea, a physicist at the California Institute of Technology, who did not participate in this research, told Scientific American.

The research was published online on Oct. 2 in the journal Science.