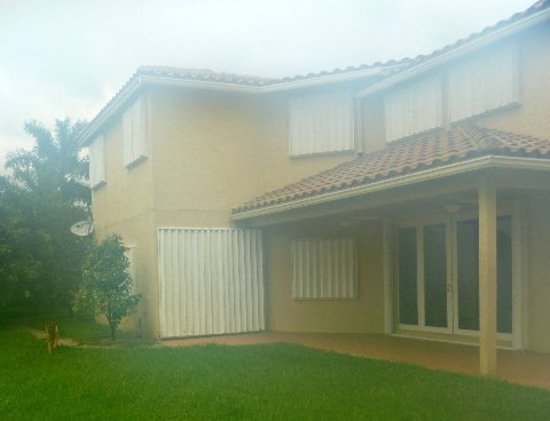 Everyone living in Florida since 2005 has a hurricane story; some are truly devastating. Since I am writing this in "real time" I don't know the outcome of MATTHEW. Hopefully, he'll be less destructive than ANDREW, a category 5 monster that side-swiped those of us living in Palm Beach County back in 1992 but devastated southern Dade.

FRANCES hit us in 2004, two years after we had moved into our present home. It was the first time our new community had to deal with the racks of aluminum screw-on hurricane shutters occupying our garages. Thirty percent of the damn things didn't fit properly, and pounding concrete nails into stucco while balancing on a thirty-foot ladder in gusting winds is insane. I swore that on my next book deal I'd get the accordion shutters.

The new shutters were put to the test a year later. I was away on a two-week book signing tour when WILMA looped across the state in 2005, leaving my wife, Kim to handle things. Fortunately, the shutters worked pretty well - except for the two that had been installed backwards. Unfortunately, WILMA knocked out the power for ten days. My wife is a tough lady, but being cooped up in a hot humid house with kids, her mother, and the (ex) son-in-law's wacky family was too much to bare. I returned a day after the electricity came back on to Hurricane KIM.

Which leads me to MATTHEW, the storm that pounded Cuba and is scheduled to hit us in 15 hours. A lot has happened in the last eleven years, the most relevant to this story being that I was diagnosed with Parkinson's Disease ten years ago and our oldest child, Amanda recently gave birth to her third child. Like Savannah and Leanna before her, baby Alejandra is a preemie. Having doubled her birth weight to a whopping four pounds, it was time to take the little one home... yesterday.

Yesterday (Wednesday) was also the day we began dealing with the accordion shutters. (Note to self: don't wait eleven years to maintain hurricane shutters). Kim and I began with the two most ridiculous windows in the house - two half-moon-shaped decorative glass objects in the living room twenty feet off the ground that do not open, reachable only by climbing out a second-story window onto a slanted roof.

Being the one with the penis who had not had an epidural shot in her spine two hours earlier, I went out first, quickly discovering that my bad back and aching sciatic nerve didn't exactly like what I was attempting. verbalizing thoughts like, "why is a 57-year old man with a bad back and PD doing out on a 40-degree tile roof, thirty-five feet off the ground?" sent my wife out after me. Birthing four children has given Kim far stronger core strength and nerves of steel, and after yelling at me to "get out of my way and get inside, you moron" she handled one of the two shutters - the second closing but refusing to lock.

She then went off to bed to sleep off the remains of her anesthetic, leaving me to handle the six remaining upstairs windows. I quickly discovered a few "challenges." Of my two office windows, one isn't aligning and the other has a lock jammed with rust - a problem shared by the small window in the bathroom. The shutter in my daughter, Kelsey's room was not aligning. And the two shutter tracks in the playroom/man-cave had cement in them.

Yes, cement. It seemed that the Three Stooges who had cemented roof holes years ago (pertaining to a rodents-in-the-attic problem) had gotten cement in the lower shutter tracks. This required me to chisel it out using a hammer and screwdriver. Three hours and a semi-herniated back later and the shutters now closed.

A quick trip to the chiropractor later and I was ready to tackle the first-floor windows. All went fairly smoothly and I ended the day icing my back while watching a DVD of the Eagles-Steelers post-game shows sent to me by my best friend living in Philly (my birthplace that does not suffer many hurricanes).

Four shutters separate us from containment and MATTHEW is eighteen hours away. I'm up early and upstairs. The office window I could not shut yesterday finally aligns... three to go.

Kim awakens, downs her coffee and enters our daughter's room, quickly determining that a shutter peg is not inside the track. Using brute force she fixes the peg and aligns the shutter... two to go.

The storm is now 12 hours away and I need to rig these last two shutters or we won't have containment.