For Matthew McConaughey and his longtime love Camila Alves, welcoming their first son Levi Alves McConaughey on July 7 was typical of the way the couple handles everything in their lives: easy-going and as a team.

And now, in an exclusive interview and photoshoot, the 38-year-old actor opens up about becoming a father for the first time.

"We found a great rhythm," Matthew tells OK! about the delivery of baby Levi. "Contractions started kicking in. I sat there with her, right between her legs. We got tribal on it, we danced to it! I was DJ-ing this Brazilian music."

Levi was born at Santa Monica-UCLA Medical Center and weighed a healthy 7 lbs., 4 oz., and Matthew tells OK! he kept a detailed diary of his and Camila's hospital experience.

"I have it all chronicled," he explained. "Becoming a dad is something I've dreamed of doing since I was 10. Becoming a father felt very, very natural. We were jamming! She was sweating. No painkiller, let's go. She just clicked into that gear that only a woman has at a time like this. We'd been up for 40-something hours, and we went from dead tired to a really steadfast, 'Let's handle this... let's stay in the rhythm. Don't let the contraction be more than you.'"

Camila, 25, wanted a natural birth and chose not to have an epidural. But in the end, Matthew told OK! it came down to what was safest for both mom and baby.

"We ended up having an epidural because, on the large contractions, the umbilical cord was being compressed. They went in and tried the vacuum. This is where I learned -- and no one tells you this -- but having a baby is a bloody, pukey, sweaty, primeval thing! And I mean that as a beautiful thing. It is wild. But the vacuum didn't work, and the doctor said, 'C-section.'

The Texas-born actor says he cut the umbilical cord in "one snip" and got to hold his son for the first 15 minutes while doctors worked on Camila. Both he and the Brazilian beauty -- who waited to know the sex of their baby -- say they were not surprised to find out they had a boy.

"I said, 'Come here, little man. I saw the pecker and screamed that we'd been right all along about him being a boy. Then I brought him over to her [Camila],' Matthew said.

For the complete interview including more exclusive photos with Matthew, Camila and baby Levi, pick up the new OK! -- on sale everywhere Thursday! 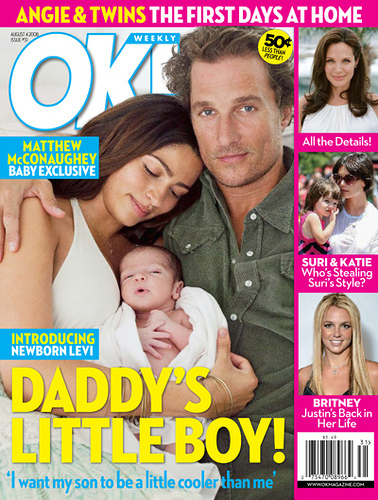