Years ago, while running an errand, I encountered a woman on the sidewalk whom I know. She and I each have reason to feel disgruntled with the other. When I glanced at her, I saw that she was, literally, shaking with rage. Her features were twisted and reddened with hate. Rage radiated out from her in palpable, caustic waves.

For whatever reason—not because I’m enlightened—her radioactivity didn’t scorch me. She was spitting mad and didn’t bother to hide it because she wanted me to feel it, but I witnessed it without taking it on. It’s something I’m usually not good at. But on that extraordinary day, I simply observed. I thought, “So that’s why all the spiritual teachers say to forgive. She’s suffering more from her hate than I am.”

It was an epiphany for me, who lives, imperfectly, a life seeking awakening. Looking at that woman, and feeling sorry for her, filled my mind with the keen understanding that there must be a better way. I even longed for it.

And what is the elusive better way? It must have something to do with maturity. That is, with mature compassion for self and for others, and with the realization that vengefulness is a blade that cuts two ways.

Indeed, it’s a lifetime’s work to truly grow with wholeness into an adult, particularly for those of us with regrettable role models. I have my own sad stories of wounding, of a dysfunctional family of origin and a dysfunctional first marriage. Those stories have marked me, but they don’t define me. Rather, they have motivated me to work on myself.

Healing is possible, growth is possible and wholeness and maturity are possible for those of us who want to be our best selves. We don’t have to live steeped in the poison of our early programming and the way it plays out currently in our lives.

David Richo’s books are field guides for the journey. Richo, whom I have never met, is a psychotherapist, teacher, and workshop leader in California. His website says he “combines Jungian, poetic, and mythic perspectives in his work with the intention of integrating the psychological and the spiritual. His books and workshops include attention to Buddhist practices.”

The website description slyly references Richo’s own teachings about love. I’ve found ‘attention’ discussed in three of his books: How to Be an Adult: A Handbook on Psychological and Spiritual Integration (New Jersey: Paulist Press, 1991); The Power of Grace: Recognizing Unexpected Gifts on Our Path (Boston: Shambala Publications, 2014); and Daring to Trust: Opening Ourselves to Real Love & Intimacy (Boston: Shambala Publications, 2010).

‘Attention’ is one of the five As that comprise love, according to Richo’s teachings. The other four are Acceptance, Appreciation, Allowing, and Affection. These five attributes together form the field of love, like strands weaving a tapestry, and love is the basis for healing and growing.

It starts with love for the self, what Buddhists refer to as “metta.” Richo’s books emphasize love as an ongoing practice that sometimes fails. The practice founders because all humans are flawed. Sometimes we just drop the ball. Richo writes of maturity having both the flexibility to encompass others’ imperfections and the resilience to return to trust.

It’s not the first time I’ve encountered this idea of mature flexibility, which can take effort to learn. A former, warmly-regarded shrink used to talk about a study done by his colleague, who discovered that only fifty percent of very bright girls grow out of the black-or-white thinking of early adolescence into the richer subtlety and human complexity of the gray-scale. A certain kind of maturation, one that is either well modeled in early life or heartfully inculcated later, enables people to leave behind the shrill insistence on either/or and open into a more generous inclusiveness.

I like Richo’s handy tool of the five As combined with the resilience of adults in the face of inevitable pain, loss, and disappointment; this depiction gives a clear view onto the landscape of interpersonal relating. No one has ever quite articulated love this way to me. I can see in a new, nonjudgmental way how my early experiences failed to provide me with love, and also how I can love myself and others better now.

Informing Richo’s teachings is his belief in spirit, in the soulful dimension of life. But this belief isn’t presented in religious terms. In fact, in The Power of Grace he suggests that belief in God isn’t even necessary in order to affirm, and be affirmed by, grace. He says, “The transcendent is the more that cannot be grasped by intelligence, only by experience.” (The Power of Grace, p. xv). That splendid more inspires us to say yes, unconditionally, to life.

There’s not a whiff of sanctimony in these books, not one iota of the ‘blame-the-victim’ mentality that sometimes characterizes spiritually-minded books of this sort. Instead, Richo writes of honestly acknowledging the hurt, of saying “Ouch!”, and of grieving. We must mourn in order to let go.

Richo offers a paradigm for healing early wounding that includes remembering, honoring the self-reliance we were forced to learn, imagining a better way of handling the situation, forgiving, and living in the present with the skills we lacked in the past. Some of those skills include letting go of expectations of other people and instead creating agreements with them. Healthy, actualized adults also “ask for amends when they are insulted and shun those who consistently refuse to treat them respectfully.” (How To Be An Adult, p. 41).

I don’t have to like the woman from the sidewalk, and probably never will. But I am grateful to her for illustrating with perfect clarity how negativity damages the person who holds it. She wanted me to feel badly because of her hate and rage, and I did—for her. That lesson has led me forward into a whole other paradigm, one beautifully set forth by David Richo’s books. 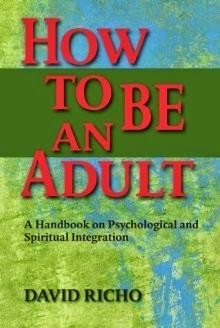