NewsU.S. NewsWorld NewsBusinessEnvironmentHealthCoronavirusSocial Justice
PoliticsJoe BidenCongressExtremism
EntertainmentCulture & ArtsMediaCelebrityTV & Film
LifeStyle & BeautyFood & DrinkParentingTravelWellnessRelationshipsMoneyHome & LivingWork/LifeShopping
CommunitiesQueer VoicesWomenBlack VoicesLatino VoicesAsian Voices
Special ProjectsHighline
HuffPost PersonalVideoHoroscopes
From Our PartnersBack In The DayWork ItDon't Sweat ItRoom for EveryoneIt's Up To Us
Newsletters
InternationalAustraliaBrazilCanadaEspañaFranceΕλλάδα (Greece)IndiaItalia日本 (Japan)한국 (Korea)QuébecU.K.U.S.
Follow Us
Terms | Privacy Policy
Part of HuffPost News. ©2021 BuzzFeed, Inc. All rights reserved.
Today, as
Google has already noted
Advertisement
, would have been Maurice Sendak's 85th birthday. When he died, we compiled a list of
our favorite spiky Sendak quotes
; this seemed as good an occasion as any to dust them off and remind everyone what a remarkable man he was. 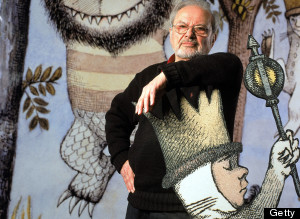 - Sendak's thoughts on eBooks, shared with the Guardian's Emma Brockes in 2011.

"There is something so hopelessly gross and vile about him that it's hard to take him seriously."

- On Newt Gingrich, as told to Stephen Colbert on "The Colbert Report," January 2012.

“I didn’t want them to be traditional monsters, like griffins and gorillas and such like. I wanted them to be very, very personal. It had to come out of my own particular life. And I remember it took a very long time until that gestation occurred and when they began to appear on drawing paper, and they began to be what I liked. And it was only when I had them all that I realized they were all my Jewish relatives.”

- Speaking with Stephen Colbert on "The Colbert Report" in January, 2012.

“I have nothing now but praise for my life. I’m not unhappy. I cry a lot because I miss people. They die and I can’t stop them. They leave me and I love them more. ... What I dread is the isolation. ... There are so many beautiful things in the world which I will have to leave when I die, but I’m ready, I’m ready, I’m ready.”

You know who my gods are, who I believe in fervently? Herman Melville, Emily Dickinson – she’s probably the top – Mozart, Shakespeare, Keats. These are wonderful gods who have gotten me through the narrow straits of life.”

"I believe there is no part of our lives, our adult as well as child life, when we're not fantasizing, but we prefer to relegate fantasy to children, as though it were some tomfoolery only fit for the immature minds of the young. Children do live in fantasy and reality; they move back and forth very easily in a way we no longer remember how to do."

- From Virginia Haviland's "Questions to an Artist Who Is Also an Author: A Conversation between Maurice Sendak and Virginia Haviland," published in 1972, via the Christian Science Monitor.

"I'm totally crazy, I know that. I don't say that to be a smartass, but I know that that's the very essence of what makes my work good. And I know my work is good. Not everybody likes it, that's fine. I don't do it for everybody. Or anybody. I do it because I can't not do it."

From an interview with the Guardian's Emma Brockes in 2011.