If everything goes to plan, NASA will have another set of eyes on Mars tonight.

The agency's "Mars Atmosphere and Volatile Evolution," or "MAVEN," spacecraft is set to arrive and begin orbiting the red planet Sunday, Sept. 21 at 9:50 p.m. EDT, completing a 10-month, 442-million-mile journey.

Unlike the Mars rovers Curiosity, Spirit, and Opportunity, MAVEN won't actually land on the Martian surface. Instead, NASA says the craft will remain in Mars' upper atmosphere, studying the properties of gases there and how they interact with solar wind. Specifically, scientists want to know what happened to Mars' atmosphere, which they believe was much thicker once and more like the atmosphere on Earth.

"The MAVEN science mission focuses on answering questions about where did the water that was present on early Mars go, about where did the carbon dioxide go,” Bruce Jakosky, a professor of geological sciences at the University of Colorado Boulder and MAVEN's principal investigator, said in a written statement. “These are important questions for understanding the history of Mars, its climate, and its potential to support at least microbial life.”

NASA Television will broadcast the orbital insertion live from 9:30 to 10:45 p.m. EDT (see the live stream video above). 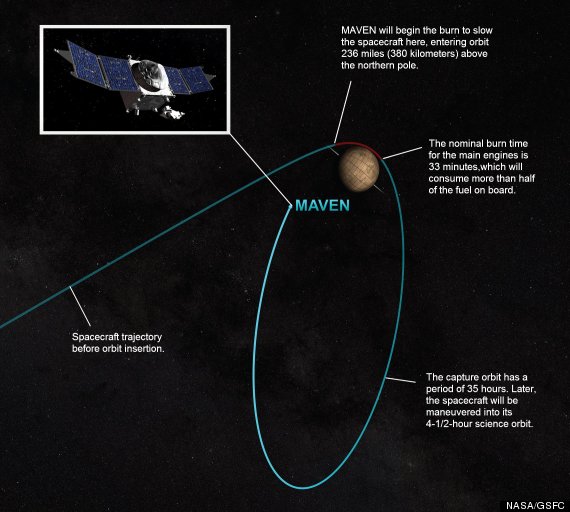 An artist's rendering of the orbital insertion of NASA’s Mars Atmosphere and Volatile Evolution (MAVEN) spacecraft.

While MAVEN's primary mission is focused on Mars, in October it will take a unique look at a comet, known as "Siding Spring," as it flies by the planet.

The latest from The Associated Press:

CAPE CANAVERAL, Fla. (AP) — NASA's Maven spacecraft entered orbit around Mars for an unprecedented study of the red planet's atmosphere following a 442 million-mile journey that began nearly a year ago.

"I think my heart's about ready to start again," Maven's chief investigator, Bruce Jakosky of the University of Colorado, said early Monday. "All I can say at this point is, 'We're in orbit at Mars, guys!'"

Now the real work begins for the $671 million mission, the first dedicated to studying the Martian upper atmosphere and the latest step in NASA's bid to send astronauts to Mars in the 2030s.

Flight controllers in Colorado will spend the next six weeks adjusting Maven's altitude and checking its science instruments, and observing a comet streaking by at relatively close range. Then in early November, Maven will start probing the upper atmosphere of Mars. The spacecraft will conduct its observations from orbit; it's not meant to land.

Scientists believe the Martian atmosphere holds clues as to how Earth's neighbor went from being warm and wet billions of years ago to cold and dry. That early wet world may have harbored microbial life, a tantalizing question yet to be answered.

NASA launched Maven last November from Cape Canaveral, the 10th U.S. mission sent to orbit the red planet. Three earlier ones failed, and until the official word came of success late Sunday night, the entire team was on edge.

"I don't have any fingernails any more, but we've made it," said Colleen Hartman, deputy director for science at Goddard Space Flight Center in Greenbelt, Maryland. "It's incredible."

The spacecraft was clocking more than 10,000 mph when it hit the brakes for the so-called orbital insertion, a half-hour process. The world had to wait 12 minutes to learn the outcome, once it occurred, because of the lag in spacecraft signals given the 138 million miles between the two planets Sunday.

"Wow, what a night. You get one shot with Mars orbit insertion, and Maven nailed it tonight," said NASA project manager David Mitchell.

Jakosky, who's with the University of Colorado's Laboratory for Atmospheric and Space Physics in Boulder, hopes to learn where all the water on Mars went, along with the carbon dioxide that once comprised an atmosphere thick enough to hold moist clouds.

The gases may have been stripped away by the sun early in Mars' existence, escaping into the upper atmosphere and out into space. Maven's observations should be able to extrapolate back in time, Jakosky said.

Maven — short for Mars Atmosphere and Volatile Evolution Mission — will spend at least a year collecting data. That's a full Earth year, half a Martian one. Its orbit will dip as low as 78 miles above the Martian surface as its eight instruments make measurements. The craft is as long as a school bus, from solar wingtip to tip, and as hefty as an SUV.

Maven will have a rare brush with a comet next month.

The nucleus of newly discovered Comet Siding Spring will pass 82,000 miles from Mars on Oct. 19. The risk of comet dust damaging Maven is low, officials said, and the spacecraft should be able to observe Siding Spring as a science bonus.

Lockheed Martin Corp., Maven's maker, is operating the mission from its control center at Littleton, Colorado.

This is NASA's 21st shot at Mars and the first since the Curiosity rover landed on the red planet in 2012. Just this month, Curiosity arrived at its prime science target, a mountain named Sharp, ripe for drilling. The Opportunity rover is also still active a decade after landing.

More landers will be on the way in 2016 and 2018 from NASA and the European and Russian space agencies. The next U.S. rover is scheduled for launch in 2020; more capable than Curiosity, it will collect samples for possible return to Earth, and attempt to produce oxygen from atmospheric carbon dioxide. That latter experiment, if successful, would allow future human explorers to live off the land, according to NASA's John Grunsfeld, head of science missions and a former astronaut.

"This really is a quest of humanity," he said.