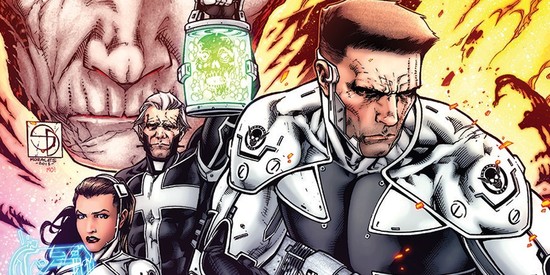 Max Brooks already terrified readers by giving new life to zombies with his book World War Z, and now he's focused on a helluva comic book project of biblical proportions. On stands now, Shadow Walk revolves around the notion that the Valley of the Shadow of Death, first mentioned in Psalm: 23 of the Old Testament, exists, and it's not a particularly preferred vacation spot.

Co-created by Brooks, along with writer Mark Waid and artist Shane Davis, the Legendary Comics graphic novel has elements of sci-fi and horror. It follows a team of soldiers, a priest and a scientist into a mysterious portal where the characters must confront their fears -- and establish whether they've stumbled onto a gateway to hell.

"It is a doorway," Brooks teased. "I don't want to say too much because I don't want to ruin it, but it is a place where the laws of human physics, real-world physics, are turned upside down and we don't understand why."

This is not the first time Brooks has turned things upside down. Brooks' 2003 book The Zombie Survival Guide, which just enjoyed its tenth anniversary, helped kickstart the current zombie craze -- along with Edgar Wright and Simon Pegg's Shaun of the Dead and Zack Snyder's remake of the George Romero film Dawn of the Dead, both in 2004. But the 2006 book World War Z pushed the undead envelope further by displaying a frightening world ravaged by a pandemic of resurrected corpses. That oral history of the zombie apocalypse was then adapted, loosely, this year into the Paramount Studios film starring Brad Pitt.

While Shadow Walk is zombie free, like World War Z before it, Brooks has striven to craft a real world that also happens to have something very strange going on. As such, the story doesn't take place in made up cities like Gotham or Metropolis.

Brooks said this storytelling preference is why he was excited to do the book with Legendary Entertainment, and why he has enjoyed working with founder and CEO Thomas Tull.

"He takes mythology and tries to ground it in reality," said Brooks. "He always gives me these awesome intellectual exercises like: 'Give me a history of the Valley of the Shadow of Death, write me a biography,' and that's what I did."

Brooks added that he then passed the torch to Waid, who "did the heavy lifting."

However, while Shadow Walk is grounded in a reality that resembles our own, there are hi-tech weapons, strange set pieces and scary monsters on display. And this is why Brooks said he enjoys playing in the world of comics.

"The problem with movies is everything costs money, so you can't have big battles and exotic locales," he said. "The art is restricted by the finance, whereas with comics, you can do anything you want."

Certainly Brooks knows of what he speaks when it comes to comic books. The creator also wrote the IDW comic G.I. Joe: Hearts and Minds and The Extinction Parade, his current series he created for Avatar Press, which examines how vampires might be holding up during the zombie plague.

But as a kid going to Hi De Ho Comics in Santa Monica, Brooks said the comics he read weren't really heavy with horror. Though he did mention a fondness for Sam Glanzman's factual A Sailor's Story and Steve Niles' 2005 interpretation of Richard Matheson's story I Am Legend, he said his favorite comic remains Rom The Space Knight, a late '70s Marvel Comics book about a cyborg warrior from Galador who battles magical Dire Wraiths on Earth.

"I am a Rom fanatic; I got so mad when they changed artists halfway through the series and then the art started to look kind of sloppy, but I love Rom."

So is it a big shift from being a cyborg-warrior-loving fan to playing in the sandbox of apocalypse and the biblical notion of hell? Not really, said Brooks. He said Shadow Walk and the search for an entrance to the underworld, which some people take seriously, is all part of a similar fascination.

"Two hundred years ago everything was myth," said Brooks. And while the rise of technology and science has defined how we explain our world, he said there is still an "urge" for mystery.

Behind mystery, there is also the question of faith within Shadow Walk, and Brooks admitted there is a religious subtext at play within the book; the story has allowed him to tinker with questions that are important to him, he said.

"Why do people believe what they believe? Why do they stick to it when they're confronted with something that might disprove it?"

Still, faith, mystery and "because it's cool," were not allowable excuses for Brooks when he was crafting the Valley of Death. Instead, he said he had to make certain everything weird happened for a reason.

"Thomas Tull was actually a physics major in college, and he's a very demanding boss, and you better have an answer for everything," he said. "You put something in there, you better be able to back that up; it's like defending a PhD thesis with Thomas."

But with all the time spent writing a biography and establishing rules of the Valley of the Shadow of Death in Shadow Walk, would Max Brooks choose to visit it if it were actually ever discovered?