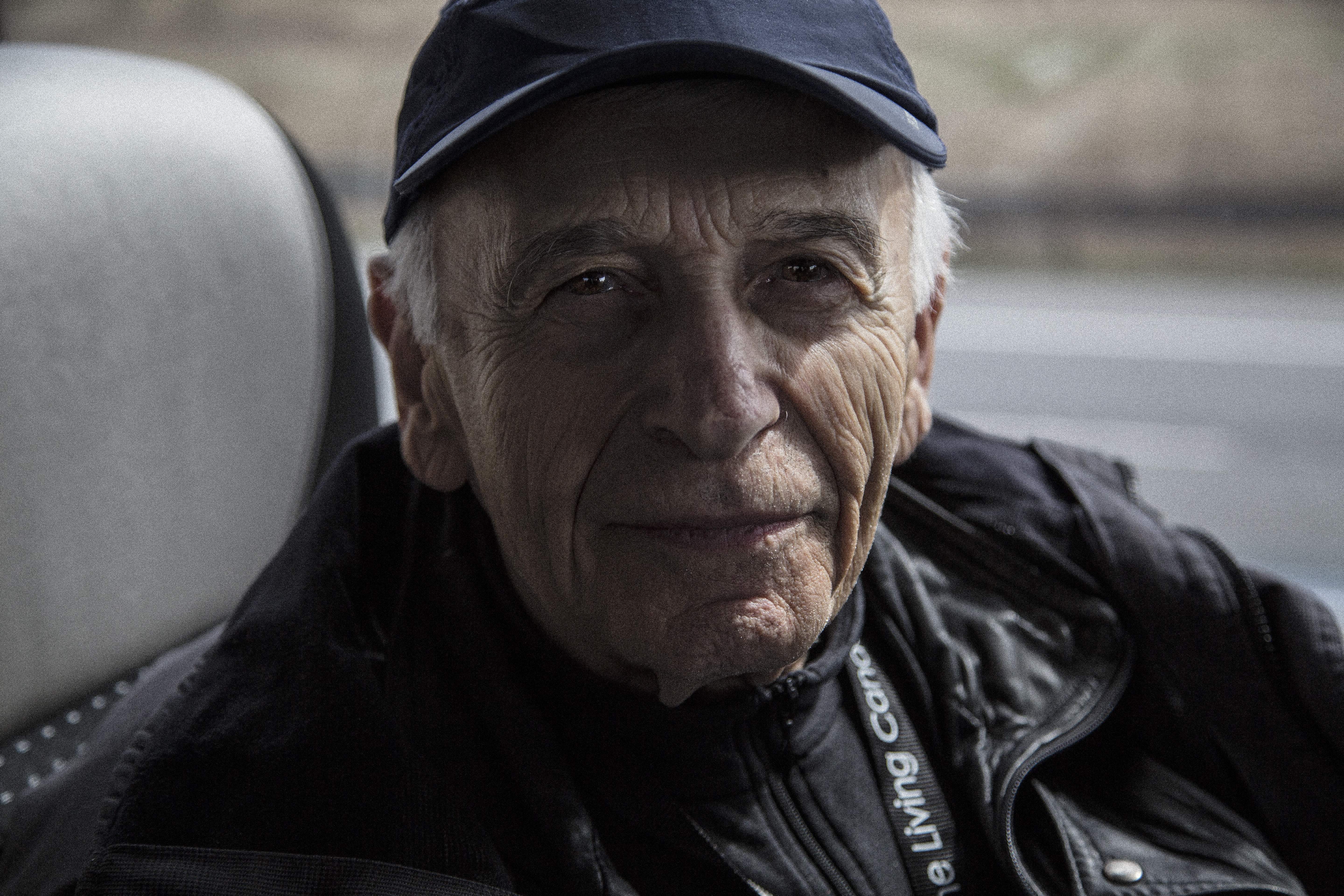 Max Eisen, an 86-year-old survivor of Auschwitz, entered a courtroom in Lüneburg, Germany, last Thursday to give his testimony in the trial of Oskar Groening, a 93-year-old former Nazi death camp worker infamously monikered "The Accountant of Auschwitz." Groening stands accused of complicity in the murder of 300,000 people at the Nazi camp, where he was responsible for sorting through the belongings of the camp's detainees -- specifically, counting the money and valuables confiscated from new prisoners.

Eisen was one of those prisoners.

When asked to participate in Groening's trial, he told The Huffington Post, he was initially hesitant. During the time that the trial was to take place, Eisen had planned to travel to Israel with the March of The Living, an organization focused on Holocaust education, and planed to visit his granddaughter there as well. He was also set to participate in a commemorative march through Auschwitz the week before the trial.

"The only way I could do it was to give up going to Israel," Eisen said. "I wanted to see my granddaughter. But I thought it was important after all these years, it's important for the record. Plus, I was coming from marching in Auschwitz where we first crossed paths, and meeting [Groening] 71 years later in court ... That was symbolic for me."

As Groening's trial continues, Eisen's story is a poignant reminder of the horrors of Nazi atrocities and the critical importance of compassion in the face of continuing prejudice and discrimination.

Eisen was born in the town of Moldava, in what was then Hungary but is now Slovakia, where he lived with his parents and three siblings. He described a charmed and comfortable childhood, growing up in a large house, playing soccer with friends and "pruning trees and picking wild mushrooms" with his grandfather. On May 18, 1944, when Eisen was 15, he and his family were rounded up in a brickyard by Hungarian gendarmes and deported to Auschwitz. More than 400,000 Hungarian Jews were sent to the camp over the course of just eight weeks.

For three days, Eisen was locked in a cattle car with 100 other Jews. Upon arriving in Auschwitz, he, along with his father, Zoltan, and his uncle, Eugene, were assigned to a labor force, made to drain and fertilize swamps. Eisen's mother Ethel, nine-month-old sister Judit, two younger brothers Eugene and Alfred, aunt Irene and grandparents Fabian and Malvina were immediately selected for the gas chambers and killed in the camp's Crematoria II.

After the selection took place, Eisen went with his father and uncle to the showers. He remembers the following scene: "There was a strong man in his twenties from my town. He wore glasses and his glasses dropped in the shower and he got down on his fours looking for his glasses. An SS guy got livid and gave him a kick and stomped on his chest and I heard his ribs cracked. He died, and this was my initiation to Auschwitz." 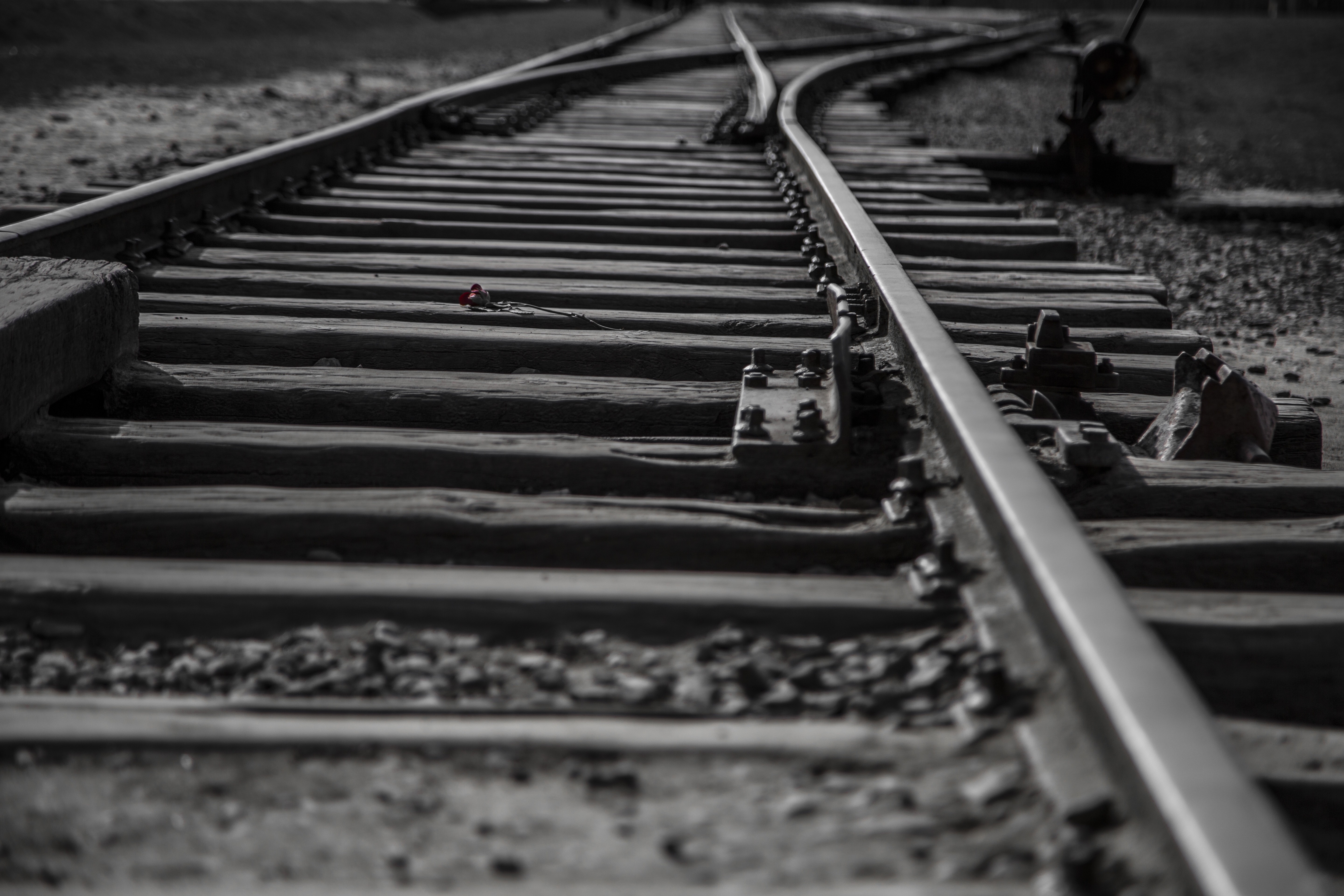 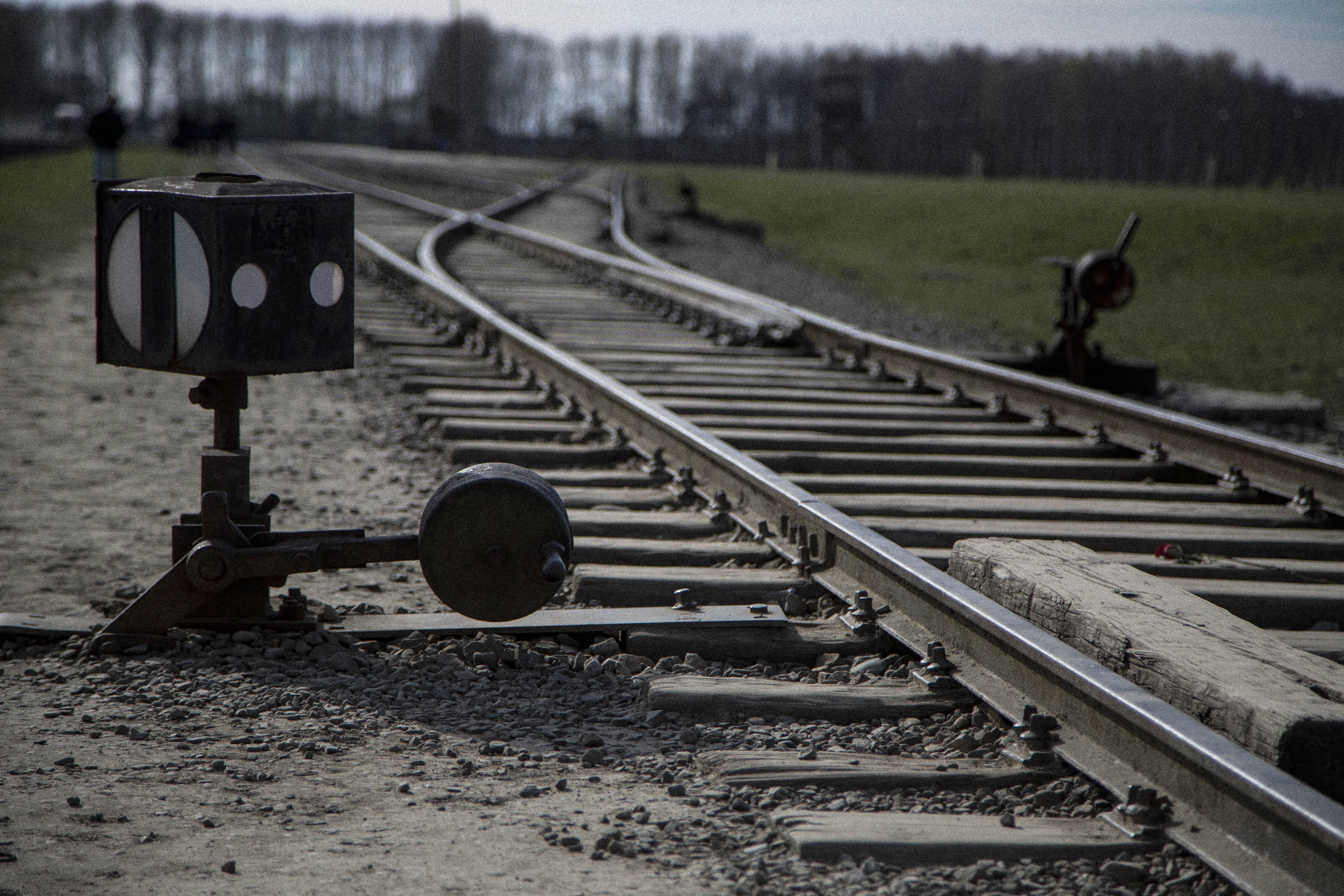 The tracks at Auschwitz-Birkenau where transports of prisoners arrived. (Photos by Emily Kassie, The Huffington Post)

Eisen said he witnessed many atrocities in Auschwitz, including the hanging of prisoners who tried to escape as well as killings by lashing, beating and shooting. Shortly into his time at the death camp, Eisen's father and uncle were also selected for the gas chambers. He estimates that a total of 55 to 60 members of his family and extended family were killed, save for himself and two cousins. 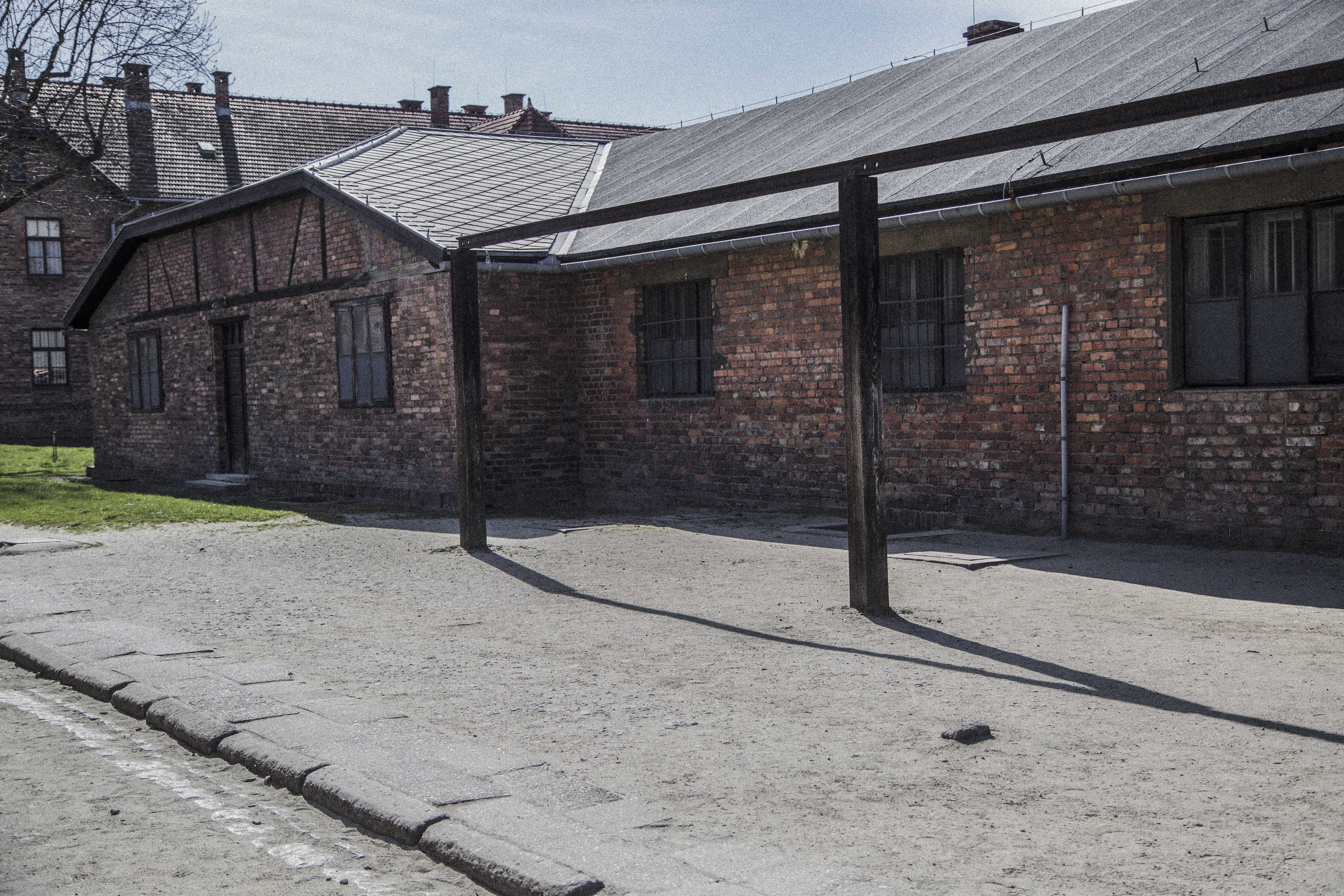 The gallows where four Jewish girls were hanged for stealing weapons. (Photo by Emily Kassie, The Huffington Post.) 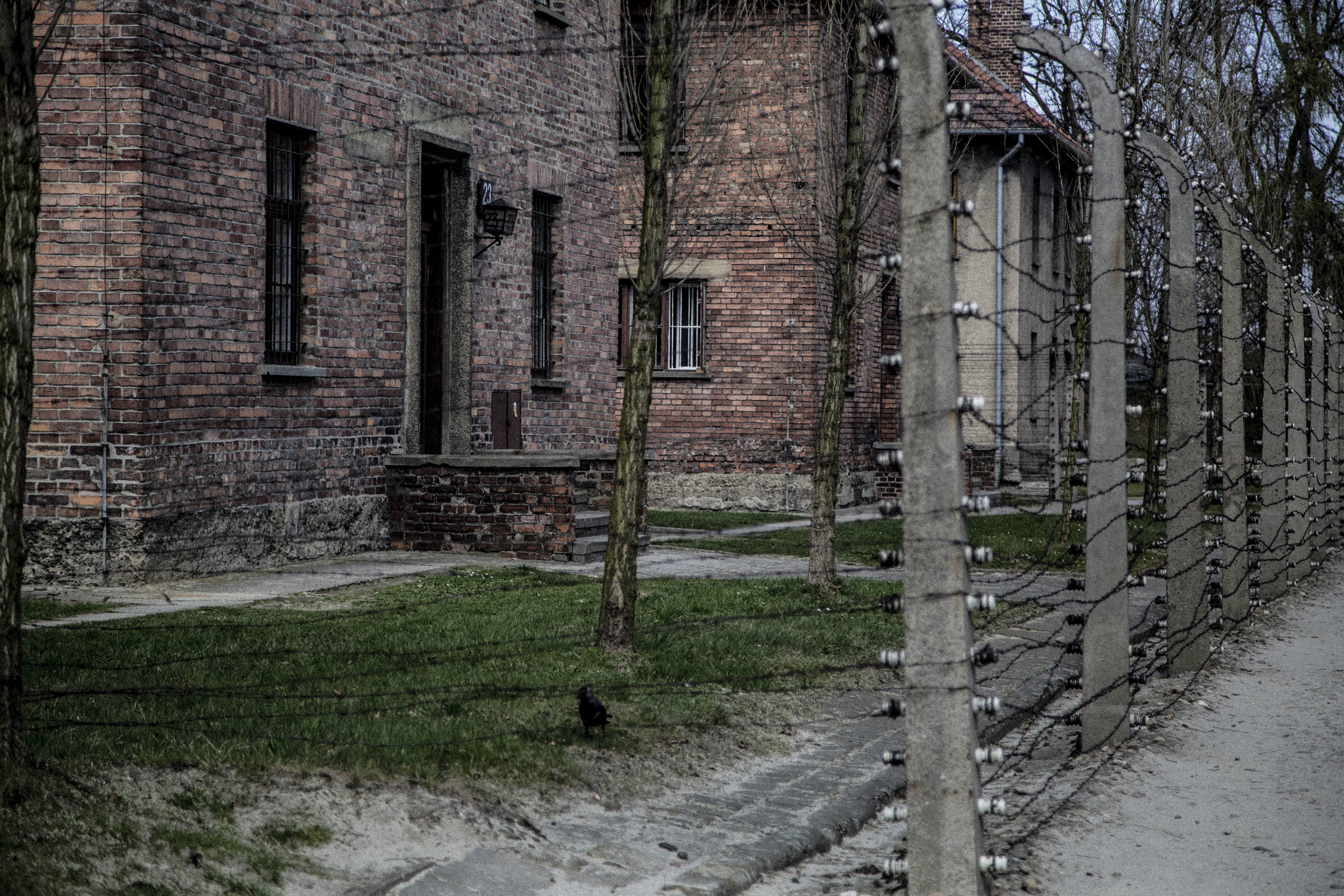 The holding area where Eisen said goodbye to his father and uncle before they were killed. (Photo by Emily Kassie, The Huffington Post.)

One day, after getting beaten by an SS guard, Eisen was taken to Block 21, the infirmary. Dr. Tadeusz Orzeszk, a Polish political prisoner, took Eisen under his wing and made him a cleaner in the medical facility. In doing so, Eisen says, Orzeszk saved his life. In addition to cleaning the sheets and medical instruments, Eisen had to keep the facility immaculate -- before operations "and [a] lot more after."

"It had to be spotless," Eisen said. 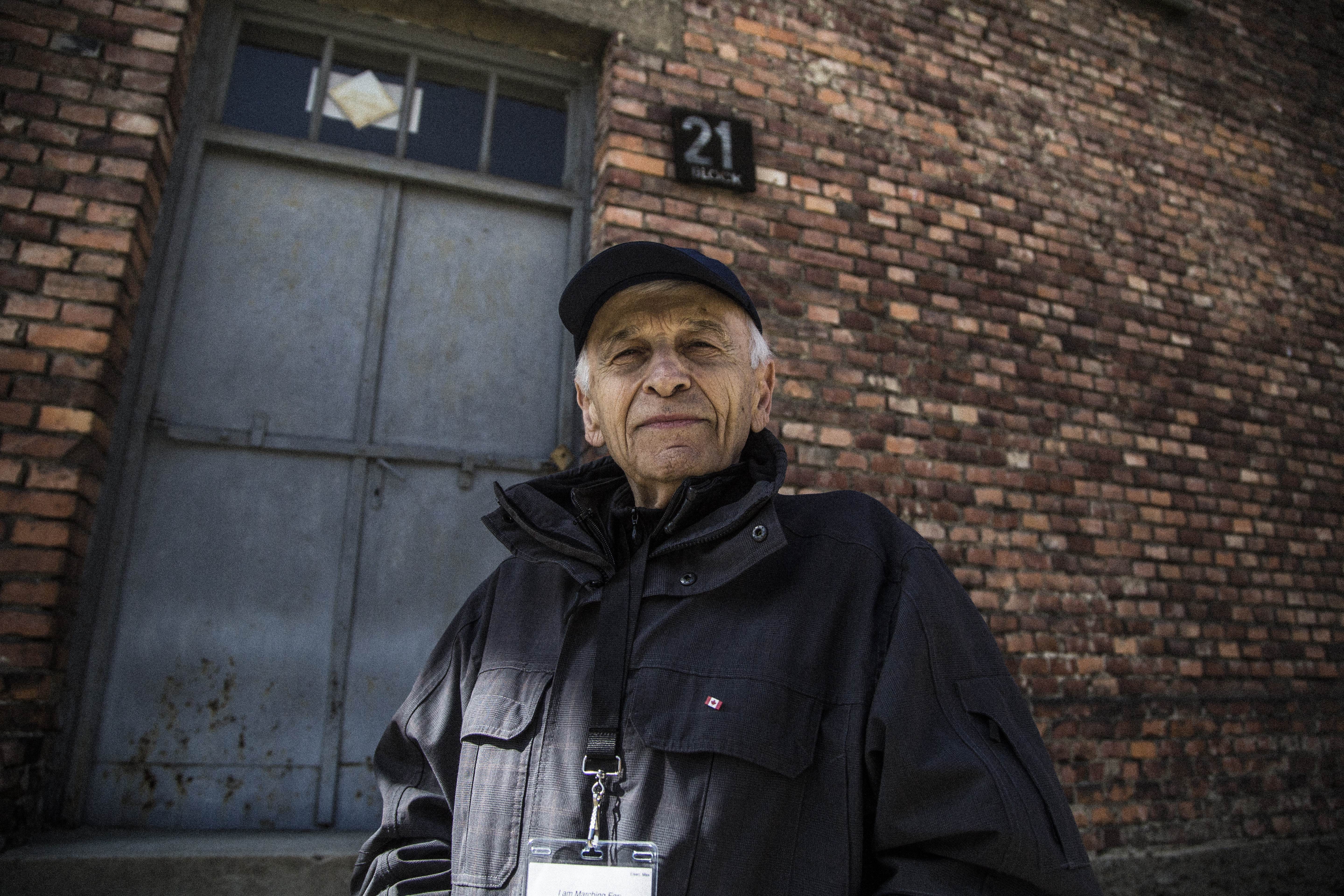 Eisen in front of the entrance to Block 21, the infirmary, where he worked as a cleaner. (Photo by Emily Kassie, The Huffington Post)

In January 1945, as the Allied forces crept closer, Eisen was sent on a death march. He and other prisoners were forced to walk through the freezing snow for days, without food or proper clothing, until they reached Mauthausen concentration camp in Austria, over 300 miles away. Eisen estimates that roughly 25,000 people started the march, during which at least 40 percent died from starvation, cold weather or "they just lost their strength and will to go on."

According to the United States Holocaust Memorial Museum, the death marches were orchestrated in an effort to move prisoners from the camps as the Allies approached, and transfer them into labor camps within Germany. The death marches out of Auschwitz began on Jan. 18, 1945. More than 15,000 of nearly 60,000 prisoners died on the forced march.

Eisen was moved through several more camps until he was liberated by American troops on May 6, 1945, from Ebensee concentration camp in Austria. After liberation, Eisen returned to his hometown to find that no one from his family was still there. In 1949, he boarded a ship bound for Canada, where he continues to live today. 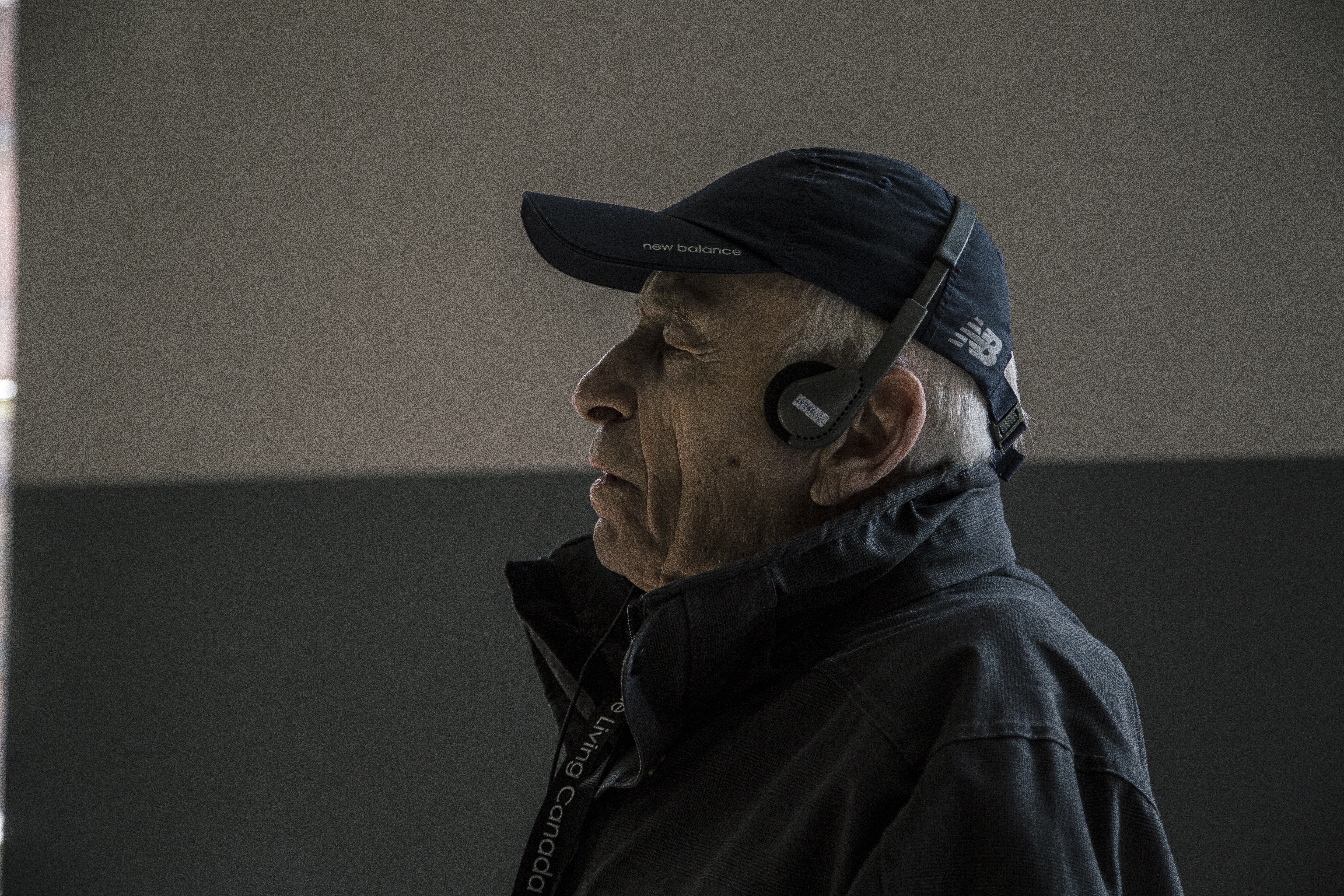 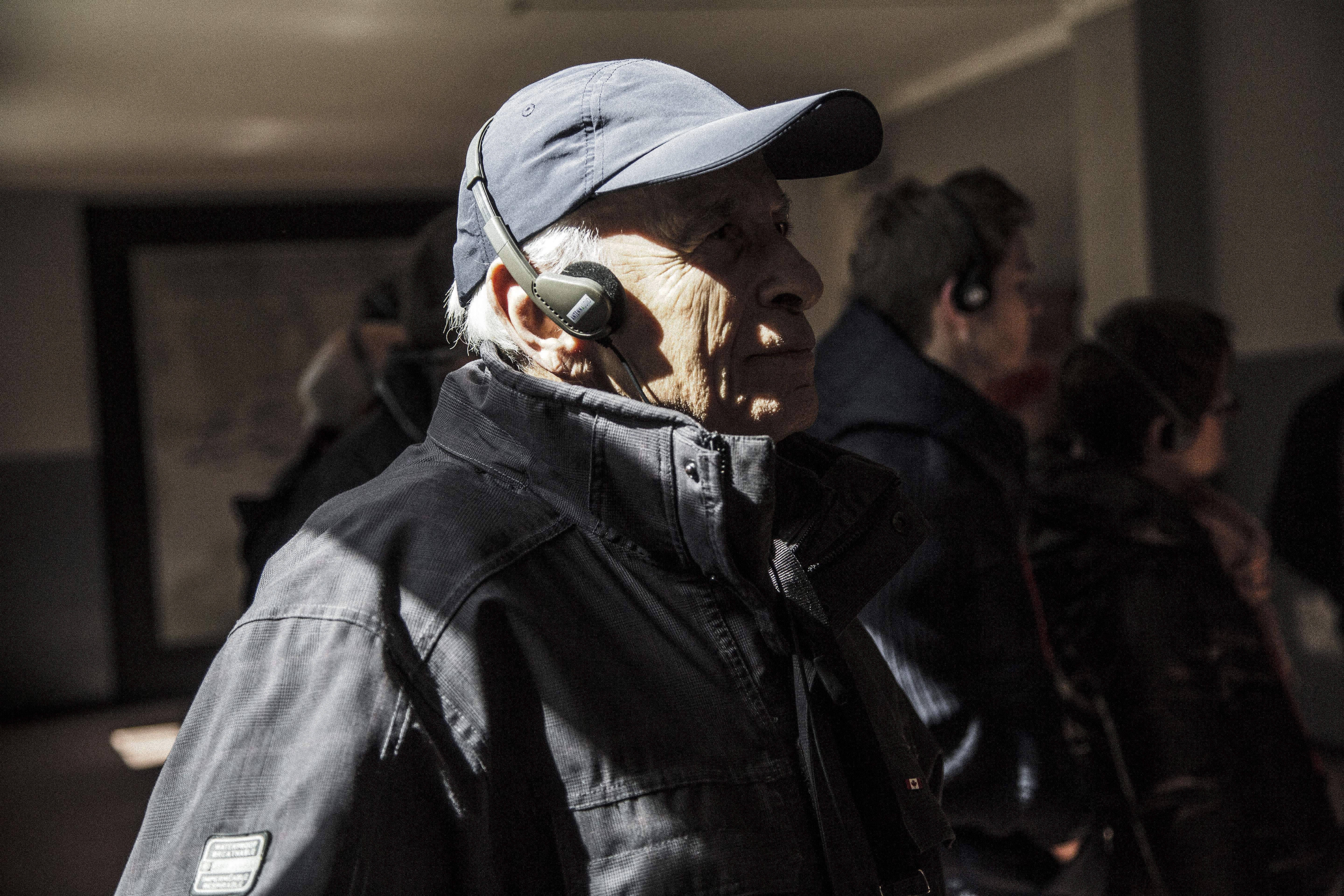 Eisen listens to an audio guide during a tour of the barracks in Auschwitz. (Photos by Emily Kassie, The Huffington Post)

Before Eisen went to Lüneburg to testify, he spent a week in Poland visiting former death camps with the March Of The Living. Eisen is pictured above on Yom Hashoah, the Israeli Holocaust remembrance day, at the site known as Auschwitz I. He and over 10,000 Jews marched from Auschwitz I to Birkenau to commemorate the remembrance.

Eisen has done the march 14 times, and finds it hard to believe that he has been able to return to Auschwitz. "When I was here, I never could have imagined that I would leave this place alive," he said. 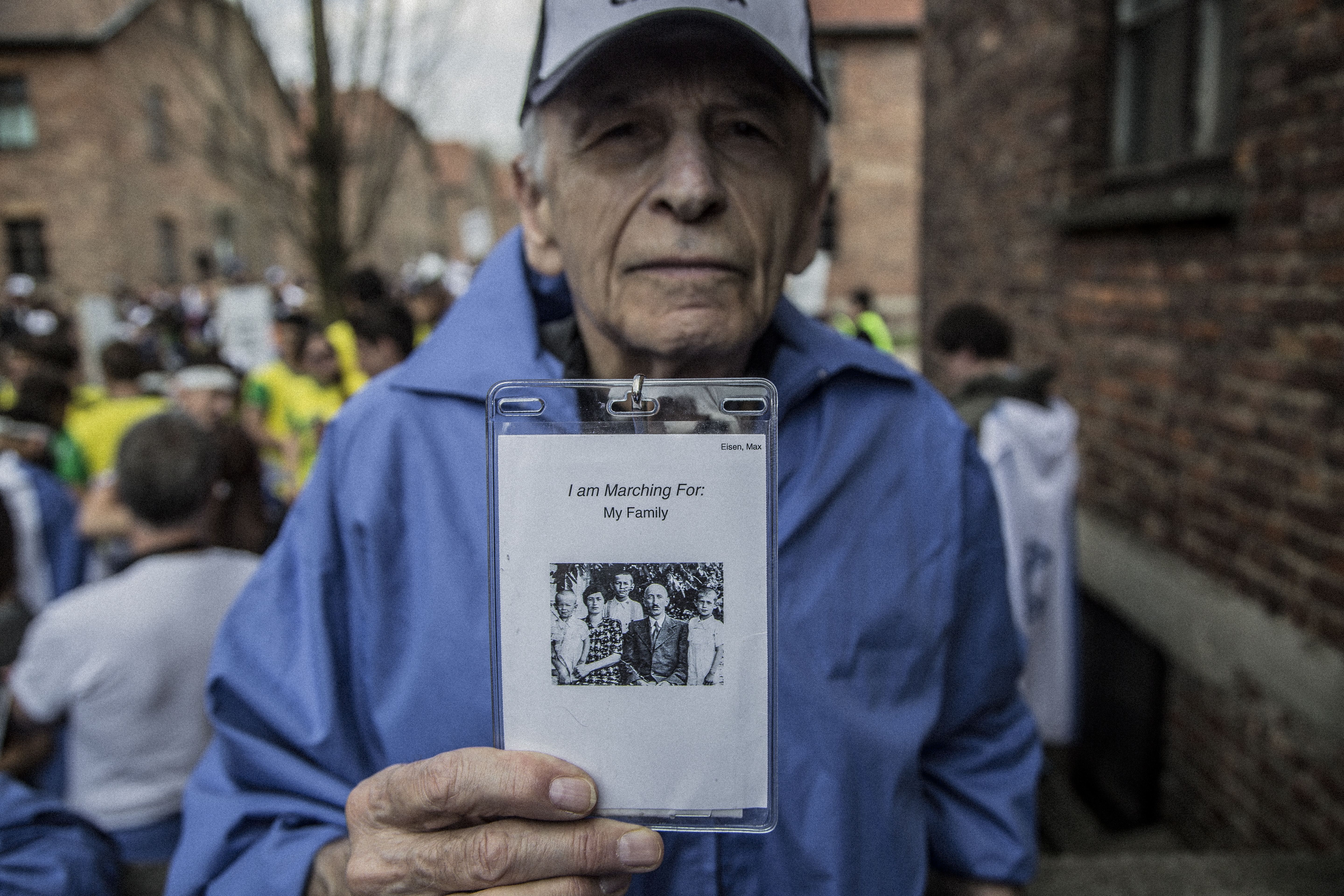 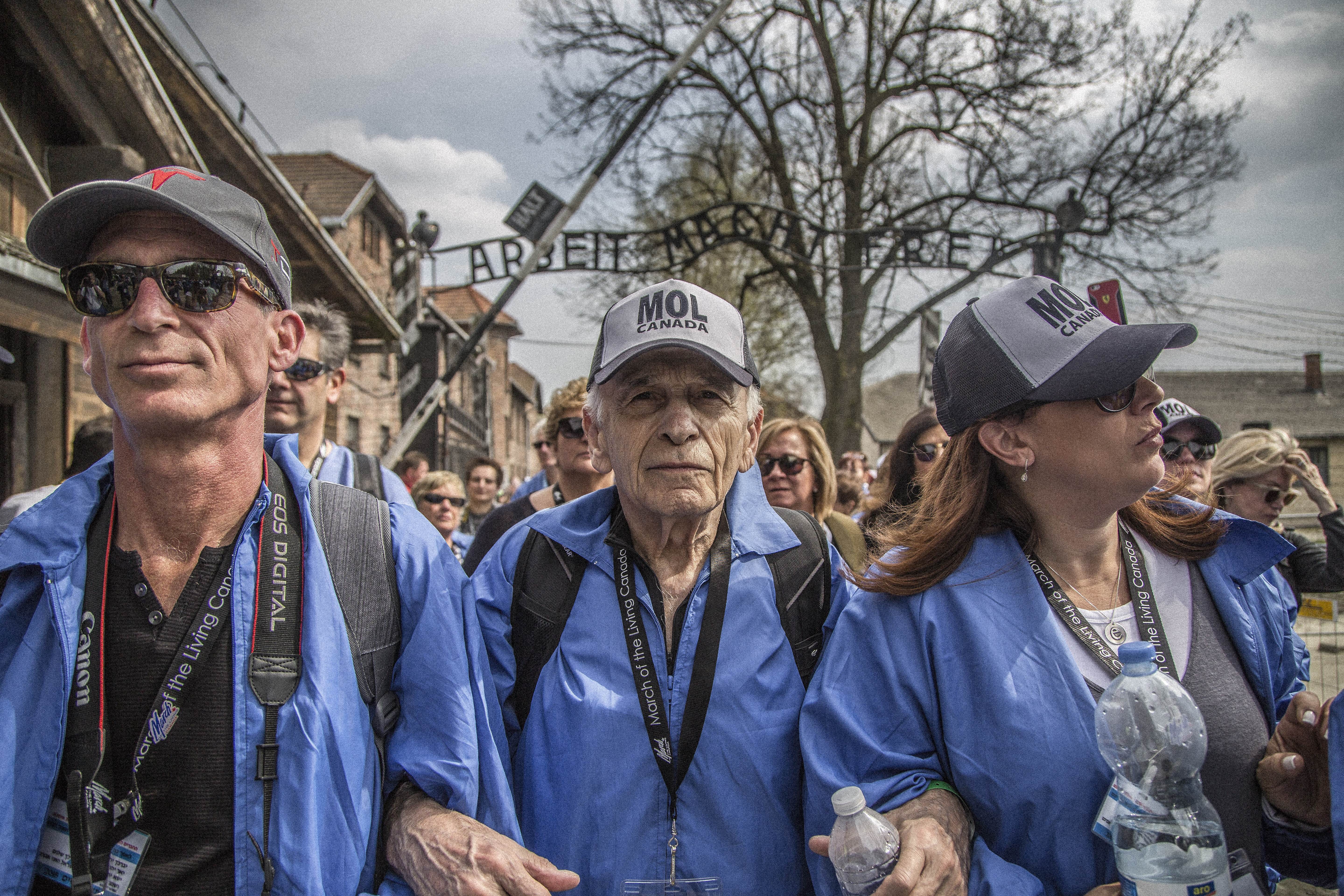 Eisen has participated in the March of the Living 14 times. (Photos by Emily Kassie, The Huffington Post)

After the march, Eisen went from Warsaw to Lüneburg to give his testimony in the Groening case.

Before the trial, Eisen didn't see the point in a prison sentence for Groening. "The guy is 93, what good would it do to send him to prison?" he asked several days before the hearing. "He should be required to tell what he did, to schools around the country three times a week. This can actually do some good."

But after sitting through the proceedings, Eisen had a change of heart.

"I sort of changed my mind after listening to him," he said. "He was spinning his story ... He said he wasn't there. He pretends he was a good guy and he didn't go along with this."

"So I sort of lost this compassion for him," Eisen continued. "I told him, 'You wore the uniform of the SS with the skull and bones on your cap and you felt 10 feet tall and you could do anything to us. Why didn't you stand up and do the right thing?'"

The trial was painful for Eisen, particularly Groening's recounting of his time in Auschwitz.

"To hear that they were drinking vodka every morning upset me," Eisen said, referring to the guards. "[Groening] also told a story where he said he heard a baby crying on the ramp after one of the transports and that his comrade bashed her head on the truck. I was just thinking about my baby sister and mother in the gas chamber. This upset me so much."

With only an hour to give his account, Eisen worries that there was more he could have said. He says the trial didn't offer him any relief, and he doesn't believe the process will do much to help him heal.

"There's no such thing as closure," he said. "There are only more questions. Since I've been back I've had the most horrible nightmares every night. One was being taken away and brought to Auschwitz again."

The trial started on April 20 and is ongoing. On the second day of the proceedings, Groening told the court, "I ask for forgiveness. I share morally in the guilt but whether I am guilty under criminal law, you will have to decide."

After the trial, Eisen returned to Toronto, where he is attempting to move forward. "I unpack my luggage when I get back and try to get back to my routine," he said. "I've been to the gym twice already and next week I have three presentations to give. So life goes on."

Eisen is still fearful of growing anti-Semitism and atrocities around the world, but is determined to do his part to deter them.

"I just keep speaking, my phone doesn't stop ringing," he said. "I want to die with my boots on. And I will tell this story as long as people want to hear it."