It’s been 25 years since the Los Angeles rebellion, but Rep. Maxine Waters remembers it like it was just yesterday.

The California Democrat was traveling on business when Rodney King was brutally beaten by LAPD officers on March 3, 1991. She told HuffPost that she remembers watching the footage from her hotel bed.

“I sat straight up and all I could say, ‘Oh, my god! Oh, my god! Look at this,’” Waters said. She and black Americans across the country shared the same outrage.

King, who was pulled over after a high-speed chase with the LAPD, was released from jail without being charged. But black people’s anger increased as they witnessed the 17 cops who did nothing but watch as their colleagues beat King walk free. The residents of Los Angeles reached their boiling point on April 29, 1992, however, when a mostly white jury acquitted the four white cops who assaulted King. That is when the city rebelled.

America has seen iterations of this play out in Baltimore, Ferguson, Missouri, and Charlotte, North Carolina, in recent years, with a similar narrative. Though Los Angeles of 1992 saw much more blood and destruction ― more than 50 killed, 2,000 injured, 9,500 arrests and $1 billion in property damages ― the reality of black Americans being denied justice when brutalized by the state strings these events together. But Waters said the L.A. uprisings were a milestone in the history of black people demanding justice.

“These were people who had been basically forgotten,” Waters told HuffPost in March. “And because of Rodney King’s beating and the current emotion that was stirring in that, it was like people were saying, ‘We’re here. You can’t do this to us. Look what you’re doing, look how you’ve been. Not only have you been with this consistent police abuse but the same people don’t have access to opportunities and jobs and health care and on and on.’ So it was a defining moment in this country and I think a defining moment in the way that black people resisted.”

The acquittal of King’s abusers, along with the 1991 killing of 15-year-old Latasha Harlins, set the stage for the L.A. rebellion. It started at the intersection of Florence and Normandie Avenues and spread throughout Los Angeles like a wildfire. People were killed and injured, stores were robbed and destroyed, and the city was literally burning and seemingly abandoned by police.

“When the insurrection broke out, I rushed to L.A. and went straight into public housing developments,” Waters recalled. “The streetlights were out, the stores were closed down. [I was] working to try and get food to children and milk to kids and diapers.”

Waters, who represented California’s 29th District at the time, held a press conference the day after the acquittal. At that point, the death toll was at nine and dozens of people were injured. Waters gave context to why residents had a right to be mad and criticized investigators for not handling the case with urgency and failing to persecute the officers involved.

“There are those who would like for me and others and all of us to tell people to go inside, to be peaceful, that they have to accept the verdict,” she said, standing alongside representatives from the Congressional Black Caucus and the NAACP. “I accept the responsibility of asking people not to endanger their lives. I am not asking people not to be angry.”

Waters remained a champion for her city over the six days of the uprising and beyond.

In addition to sending disaster relief supplies like food and diapers, Waters pounded the pavement to bring peace to South Central. She demanded the resumption of vital services like electricity and water to the area. Along with Jesse Jackson, Waters urged the Justice Department to file civil rights charges against the four acquitted cops.

When the city issued a curfew and authorities and news outlets painted the black people who were rebelling as “thugs,” Waters actively worked to shift that narrative. It wasn’t just a matter of semantics ― it was about privileged and powerful people using dangerous and racially charged language to belittle the longstanding concerns of residents of color. She opposed Mayor Tom Bradley’s use of the word “riot” to describe what was happening ― she urged him to describe it as “an insurrection.”

“I guess every day, I was out, the TV cameras were out,” Waters told HuffPost. “And I’d get up early in the morning, go to the TV stations trying to explain to them the difference between rioting and people who’ve been dropped off of America’s agenda and find themselves in a situation where the kids are hungry and the place is burning and at that time, everybody was being seen as a ‘robber’ and a ‘thug’ and someone who was responsible for the burning. ... What I tried to do was take it out of the discussion of ‘these are just no good, crazy rioting people’ and to talk about what I call an insurrection, which made a lot of white people mad.”

She took on a more understanding tone than others when addressing her constituents. She sent a letter to them, reprinted by the Los Angeles Times, to remind them to keep hope alive and urge them to end the destruction and violence:

When the verdicts come down, there will be thousands of police, sheriffs and National Guard on the streets. If you take to the streets with a Molotov cocktail in hand, a gun in your belt or a brick ready to throw, you give the police the legal right to kill you.

Our anger and frustration must not drive us to the streets. We must use our minds and our God-given talents and our legacy of perseverance and struggle. We must fight our battles in the courtroom, and in the halls of power. We must organize and rally and protest. And, through it all, we will celebrate living ― not dying.

I wish we could make life better for everyone, today. I wish we all had jobs, and happy, loving experiences each day of our lives. I wish we had peace of mind. And, if I could, I would give it to you.

Each day brings a new opportunity, a new possibility. I love you and will fight for you. I need you to stand with me to make this a better place. Let us get smart ― it’s time to chill!

Even in the aftermath of the uprising, Waters’ work continued. She settled a rowdy crowd (something LAPD failed to do) at the local Social Security office to expedite community members getting the resources they needed.

She did her fair share in advocating for her community in Washington, D.C., too. When she found out that President George H.W. Bush was to hold a meeting to discuss “urban problems” that following May, Waters invited herself.

“I’ve been out here trying to define these issues,” she told Speaker Thomas S. Foley. “I don’t intend to be excluded or dismissed. We have an awful lot to say.”

Waters’ work against police brutality during and long before the rebellion helped to get LAPD Police Chief Daryl Gates, a longtime opponent, fired in June 1992. Two out of the four cops were convicted for violating King’s civil rights nearly a year later.

Fighting for her community gained Waters national attention and it became a turning point in her career. But, according to her, one of the biggest impacts the rebellion had was on black resistance to injustice. 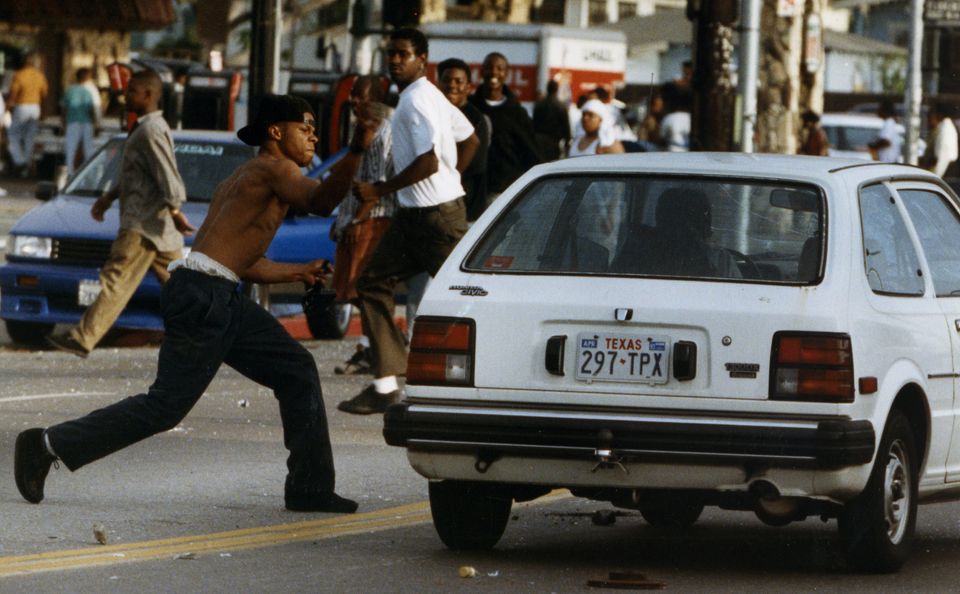