HARRISON, N.J. -- Circled dates dot a calendar on John Ramsey's refrigerator door. They show the busy life of a 25-year-old: dinner parties, birthdays, holidays. But only until May 21.

Every month after May has been crossed out. As has all of 2012.

Ramsey is one of thousands of followers of a loose-knit Christian fringe movement whose members are increasingly found on sidewalks, in parks and at transit hubs in major cities throughout the United States.

They recite passages of the Bible line-by-line and say they have decoded a message for humanity: The world is about to end.

"God says when you see the sword come upon the land, you blow the trumpet and you warn the people," says Ramsey, paraphrasing Ezekiel 33:3. "All I'm doing is telling what I know."

Ramsey and the movement's followers say that at 6 p.m. on Saturday, May 21, the ground will quake, graves will open and many of the dead will ascend to heaven. Two hundred million of the 'saved' -- dead or alive -- will float up. Those left behind will be doomed to live among blood, destruction and disease for five months before God annihilates the Earth on Oct. 21.

These warnings are drawn from the obscure and complex Biblical numerology of Harold Camping, an 89-year-old televangelist who owns Family Radio, a vast international network of Christian radio stations. Camping has been predicting 'The End' for the past two years. A similar prediction went unrealized in the mid-1990s.

His apocalyptic message has been broadcast via hundreds of billboards from Idaho to Manhattan and by a volunteer army of sign-toting, pamphlet-passing amateur preachers like Ramsey.

For most of his adulthood, Ramsey rarely stopped to consider the afterlife. Nights were for ecstasy-fueled rave parties, days were for catching up on sleep. There was the occasional college class, girlfriend or menial job -- most recently, at a catering company. The Bible was simply an old book collecting dust on his closet shelf in his parents’ house.

A soft-spoken 25-year-old with black-rimmed glasses, he favors bright polo shirts and tapered jeans -- garb not typically associated with doomsayers. But there are clues.

On a shelf in his living room rests a four-volume interlinear Bible with cross-references to the book's ancient Greek and Hebrew versions. He says most translations have corrupted the Bible, which followers read as God's literal word as well as a book of parables and symbolism. The best English translation, Ramsey says, is the King James version.

His pantry and fridge are half-empty after a final grocery store run last week. The family bought some of its usual staples: rice, steak, frozen pizza rolls, ribs, beans and corn flour for tortillas.

On a coffee table, he keeps a binder with a handwritten, 80-page timeline of the Bible. Part Biblical genealogy, part numerology, its charts and equations all point to May 21 as the long-awaited Rapture.

"Everybody says it is open to interpretation, but you have to compare scripture to scripture," Ramsey says of the Bible, alluding to 1 Corinthians 2:13 ("Which things also we speak, not in the words which man's wisdom teacheth, but which the Holy Ghost teacheth; comparing spiritual things with spiritual").

Ramsey did not grow up in a religious household. Born in Ecuador and raised in North Carolina by an agnostic father and a mother who was once a Jehovah's Witness, he rarely went to church. As a teen, he "leaned atheist." Among his favorite courses in high school were chemistry and biology.

"For a while, I thought science was the answer to all my questions," he says. "But I always was fascinated in the stories in the Bible." He wondered whether they were real, and if so, what did they mean?

In college, he signed up for tourism engineering courses. The interest faded. Slowly, Ramsey says, he was "swept up" in the rave scene. He drank, got high, had one-night stands and traveled to electronic music festivals throughout South America in his spare time.

Four years ago, he met his wife. "I was in a parking lot after going out with friends," Ramsey says, "and we passed by this car of girls with one speaking in Ecuadorian Spanish."

It was rare to meet another Ecuadorian in the American South. Within a year, they married.

Ramsey was turning his life around. And, he had started going to church.

"Baptist, evangelical, Episcopal, Roman Catholic, I tried it all," he says.

None of the denominations struck him, but Ramsey came to a realization. He wanted to find God.

He got a hold of a King James Bible -- the same tattered and ink-stained one he points to today when talking about 'The End.'

Until six weeks ago, Ramsey spent most days working at the catering company in the city. At night, he and his family would gather to study and write down the Bible's code, trying to verify what they had heard on Camping's radio shows. Ramsey and his 19-year-old brother would do the math and charts. Ramsey's wife, Marcia Paladines -- she says her "math isn't so good" -- would read alongside them. His mother, Jackie, would cook broccoli casserole and potato soup for the group.

The resulting Biblical study took almost a year to finish. But Ramsey says the numbers, which match Camping's, are "undeniable."

Camping, a frail 89-year-old who speaks in a slow but sonorous voice for hours each day on his "Open Forum" call-in show, is convinced that he crunched the exact date of the Rapture through a complex set of equations.

For example, he says, certain numbers repeat in the Bible along with particular themes. The number five means "atonement." Ten means "completeness." Seventeen is "heaven."

Camping's radio ministry, which is worth more than $120 million, has 66 stations throughout the country. Its broadcasts reach as far as Nigeria and, via the Internet, it's available in 61 languages.

"Salvation comes only through faith," he says. "We don't know what's going to happen to Family Radio or the banks or anyone else on that day, but it will be horror." Camping himself doesn't know whether he will be saved. Those outcomes are predetermined by God, he says.

Yet this isn't the first time Camping has predicted 'The End.'

On Sept. 6, 1994, dozens of Camping's followers gathered a short drive from the radio station's office in Alameda, Calif. to watch for the return of Christ. Nothing happened.

Today, Camping says he got his math wrong and hadn't "fully examined" parts of the Bible until more recently.

Neither will his followers.

Two years ago, Ramsey moved to the New York City area to study audio production and immerse himself in the city's art scene. He eventually settled in a modest two-bedroom apartment in Harrison, N.J. Paladines joined him two months later and got a job as a bank teller. Ramsey's brother, mother and father also moved shortly thereafter.

Around the same time, the family stumbled upon Family Radio, which broadcasts from 94.7 WFME FM in West Orange, N.J. Camping was deep into his end-times prophecy.

"In the beginning, I was like, 'Wow, would you believe in a date? Doesn't the Bible say nobody can know?'"says Paladines.

They started attending a Pentecostal church in Newark that is popular among the city's burgeoning Hispanic population. Filled with the Holy Spirit, congregants would speak in tongues and fall to the floor.

Ramsey and Paladines found it bizarre. Their membership only lasted a few months. Last year, they dusted off their King James Bible, returned to Family Radio and began researching Camping's ideas.

"God showed me a lot of things I haven't learned before. The numbers make sense. And look at all these things happening in the world: Earthquakes. The radiation in Japan. Tornados. Flooding," says Paladines.

Late last year, she become pregnant. The baby is is due May 27.

In the Ramsey home, the last week has been one of prayers and goodbyes.

The prayers are for friends and family, even if, like Ramsey's father, they don't believe ("He says it's our own thing and that we'll see on Saturday," Ramsey says). Friends -- the couple has few left aside from fellow Judgement Day preachers -- have come over for Mexican Lasagna, one of Ramsey's favorites.

On Thursday, Paladines' mother flew up from Florida. They hadn't seen each other for a year. Mom doesn't believe the end is near. "This is just a phase that will pass," she tells her daughter, who breaks down in tears at the words.

Over the weekend, mother, daughter and son-in-law went out to eat sushi at their favorite spot in Harrison. They wandered the halls of the American Museum of Natural History, gazing in awe at God's creations: an IMAX film on ancient creatures of the ocean, a hall of life-size taxidermied African mammals and an exhibition on 25,000 miles of ancient road's created during the Incan empire.

"We still have until May 21," says Paladines, hoping her mother will come around.

She caresses the bulge of her belly, smiling and shedding a tear as she feels the baby's slight kicks.

This may be one of her last memories of him, she thinks. Judgment Day followers believe that for those who are saved, there will be no recollection of the pains or pleasures of earth while in heaven.

"God is in control. I have prayed for mercy on my baby," Paladines says, crying. "But I don't know what's going to happen. If I'm here May 21, then I will suffer the consequences of the wrath of God. I know like anybody else I'll deserve it because none of us are perfect."

"I don't know how heaven will be. Just a very nice and beautiful place," she says. "Nothing that we have ever seen before."

Several Judgment Day caravans have taken off from California and other states in recent weeks, traveling to many corners of the U.S. to preach. Followers have quit their jobs and depleted their savings to join the effort.

Last week, hundreds of them converged in Manhattan business districts and parks before heading to Delaware and Boston.

Ramsey came with his mother and brother to Union Square.

"The enemy is coming!" he shouted to bewildered passersby. He wore a neon green shirt proclaiming "Judgement Day: May 21, 2011."

It was just after 5 p.m. on a Thursday as Ramsey held out stacks of pamphlets ("GOD GIVES ANOTHER INFALLABLE PROOF THAT ASSURES THE RAPTURE WILL OCCUR MAY 21, 2011," one read) to a crowd of suited men and women briskly walking and tapping at their Blackberries and iPhones.

The pamphlets were ordered free of charge from Family Radio's web site. Other organizations, including eBiblefellowship and WeCanKnow.com have also given out free materials.

"We only have a few days left -- can you pipe down?" a middle-aged man said to the Ramseys.

A young woman wearing sunglasses and driving a BMW pulled up and rolled down her window. She took a stack of pamphlets and immediately dropped it to the ground.

"You're insane," she said, before speeding away.

"People have a total disregard for the Bible," says Ramsey. "It seems like the ones who have everything God has to offer don't want to let go. They're absolutely terrified."

While he has passed out hundreds of pamphlets, Ramsey, like several other preachers interviewed, admits he has only seen a few dozen people actually read them.

"For a long time, I wouldn't have either," he says. "I never imagined I'd be the one to warn about The End."

Death and Dying Religion Satan Heaven End of the World 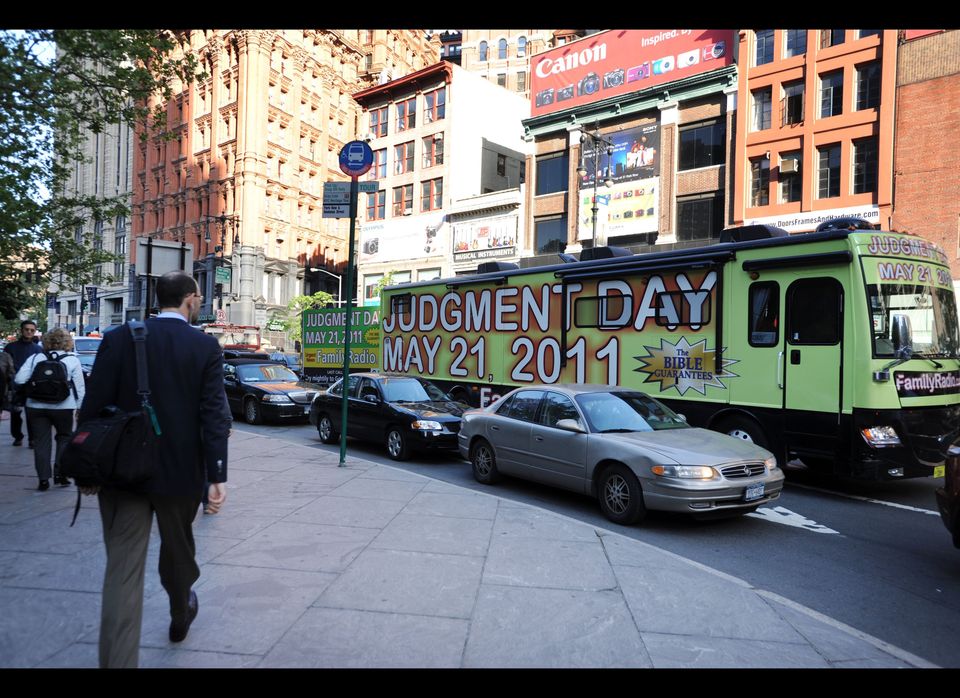