It was a Friday night, and as was usual my best friend and I got together a few hours after school. What was unusual was we decided to go see a movie instead of SCUBA diving. I had recently taken up the sport and he was my mentor as he had been diving for the better part of a full year. We had just recently taken on night diving and most weekends, and even some weekday nights after homework, were spent in the Pacific Ocean.

"Let's go see that star wars movie," he said. He had seen some commercials on television and said it looked good. I had only heard the radio advertising and, to be honest, I wasn't that impressed but we decided to see the movie anyway. At a few minutes before 7:00pm we had arrived at the theater a little earlier than expected. We waited in the unusually long line and waited and waited, and then it dawned on us that our line wasn't moving even though a parallel line (we had assumed was another part of ours) moved along at a fast clip. We kind of asked aloud to no one in particular what was going on? "They're letting in the 8 o'clock show," was the collective answer.

WHAT? We looked at our stubs and sure enough we bought tickets for the 10:30pm showing. We discussed whether or not to get a refund because the thought of waiting another two and a half hours in line seemed ridiculous to me. Jim, my friend, stated the obvious "If all these people knew they were in line for the 10:30 show then there must be something to this movie." He had a point so we waited some more. Finally, when it was our turn to enter the theater we noticed the people coming out were all smiles, no, not just smiles, but excitedly talking, laughing and just having a great time. We were ushered in past them and the only artwork I saw for the movie was a poster of white lettering on a blue background, it said simply: A long time ago, in a galaxy far, far away... Star Wars. 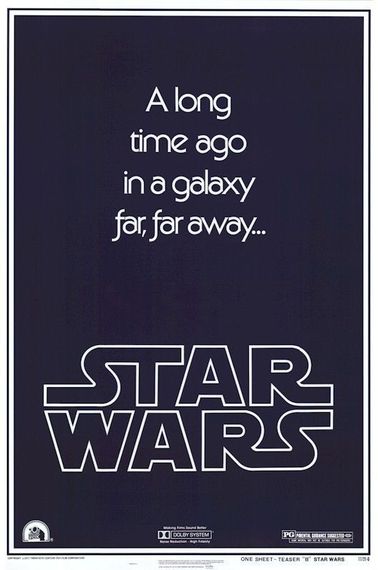 I hoped, out loud, that this movie was better than the simple poster. Because there were so many people, I got the seats and Jim got the drinks and popcorn. Finally we were settled and relaxed and in a short time, the lights dimmed.

I don't remember if there were any trailers, but I do remember the theater being quiet. Very quiet.

The screen came to life with the 20th Century Fox logo accompanied by the short drum roll and the lavish Fox Fanfare. And then the screen went dark and silent again. Soon after a logo for Lucasfilm appeared, darkness and silence followed and then the few simple words: "A long time ago, in a galaxy far, far away..." then blackness, for what seemed a long time and then the tremendous Star Wars theme thundering throughout the theater and the massive screen filled logo that only said STAR WARS and the theater erupted in frenzied applause. The logo diminished and so began the familiar crawl. And while I tried to read it I will admit it didn't make any sense to me. But then the camera panned down the starscape to one planet in the distance, then another, then the bottom of the screen was overtaken by a giant world and above us a small ship being chased by a larger ship ... a MUCH larger ship. It seemed to go on, and on, and on and when it appeared to come to an end, it went on for a few moments more.

I wasn't sure what to make of what I was watching except to say that I was mesmerized. I was astonished at the reality of what I was seeing. It all looked, somehow, well, tangible.

Finally we are inside one of the ships. There are flashes and sparks and fighting and a door blasts open and the hall is filled with smoke. Appearing out of the cloud of smoke was a figure dressed in black with a mask and styling reminiscent of a World War II German helmet. The audience around me, as if by some invisible cue, booed and hissed and I soon realized, I had joined them. I'm not sure why, but clearly this guy was not good. I glanced over to my buddy (not for very long because I didn't want to miss a moment of what I was watching) and noticed my normally reserved friend was booing right along with the rest of us. Throughout that showing we would cheer, boo and cheer some more. It was a truly interactive experience and one that I had never, ever, come across before. 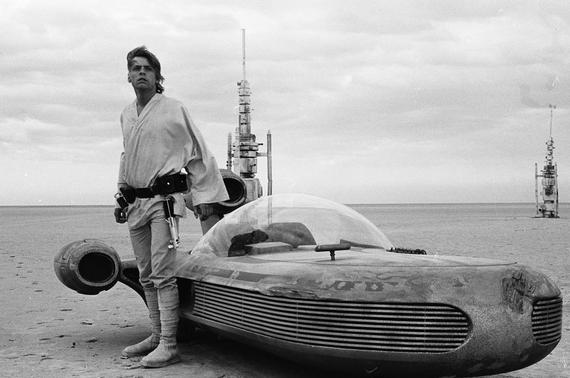 By the time the show ended we were exhausted. It was late at night, but we decided to stop at a Jack In The Box to talk about what we had just seen. We couldn't stop talking about the movie, its special effects, the story, the music the entire experience. Even our three heroes Luke Skywalker, Princess Leia and Han Solo were discussed almost as if they were real people living in a galaxy far, far away. We were excited, pumped and just generally giddy. There was so much to process and after an hour discussing the movie we realized there was still so much more to comprehend. We decided we needed to return the next day to see it again and we did. Over the course of that summer we saw the movie more times than I care to admit. After about the fourth time we began telling our parents we were seeing other movies and just hoped they didn't ask plot details.

It was actually a relief when The Deep was released because as SCUBA diving was featured prominently in it, this became another movie we actually wanted to see. There were times when we would go to see Star Wars, but our preferred showing would be sold out, so our back up was The Deep. We ended up seeing that movie a whole bunch of times too.

The wonder and awe of seeing Star Wars again after that first time may not have been duplicated but the excitement, thrill and pure enjoyment of that movie continued for many showings after. I was lucky in that San Diego was one of a few cities that screened Star Wars for a full year in the same theater and was doubly thrilled when the film was re-released with a 70mm print.

My friendship with Jim was an odd one from the beginning. Tall, athletic and handsome, Jim was the opposite of me in nearly all respects and we thought it was funny that even our friends (I had but a few, he had a throng) didn't get along. Mine were bookish, introverts for the most part and were the epitome of the words geek and nerd. Jim and his friends were cool, and hip without ever being trendy or conformists. How Jim and I ever became friends is a story lost to time. But we were and our friendship continued throughout our high school years though it was obvious it would change as the years progressed and our time spent together became less and less finally reduced to the occasional weekend diving expedition or brief hello in the halls of campus.

Star Wars reinforced the few friendships I had but it was that movie that would introduce me to a whole new group of friends. Many of them became as close as family and most of them, I am happy to say, I still regard as among the closest relationships I have. And in the years following that first screening some of us got to meet the stars of those movies, became friends with executives at Lucasfilm and were lucky enough to be invited to 20th Century Fox to watch an advanced screening of one of the installments. Pretty heady events for fans who were really not much more than kids.

But it is with mixed emotions that I welcome the news of the saga returning in The Force Awakens. We had all anticipated the full 12 films, later reduced to 9. Then, for a long time, thought there would never be more than the original three. But more came along.

So much time has passed and, sadly some of my friends have passed on. What will it be like to go to the theater to watch the next installment without them in attendance? Or the ability to lean over a table afterwards and talk about the movie with them and to reminisce about a time when we were all so young that we booed and cheered at a theater screen so much that it left our voices hoarse. That we were so excited that we even dressed up as characters from that universe when we attended conventions around the country. What will it be like to take this new journey without them at our side?

I'm excited that the series is coming back. I'm over the moon that our three heroes have returned. I hope this installment is worthy of the legacy they have left us. And if so, I hope a new generation gets to experience, even if only a small portion, what my friends and I enjoyed nearly 40 years ago. Because while it may only be a movie, it introduced me to a whole new world of friends and quite literally changed my life for the better.

And the three years from Star Wars to The Empire Strikes Back seemed a lifetime and maybe it was. So much would happen in those intervening years that it became a defining part of my life and one that I continue to reflect upon fondly.