May 8, 1945: I wonder how many teenagers and twenty-somethings appreciate the significance of V-E Day; or actually know what it commemorates. Hmmm.

From what I have gathered, few high schools bring home the history of World War II, in a meaningful way. Apparently, some school districts have been pressured to spare students the realities brought to the screen in Saving Private Ryan and Schindler's List. Curious, isn't it, when so many graphic realities are so readily available via TV and social media; in that so many graphic unrealities populate movie houses.

Since many of my students (at a community college, as well as undergrads at a university) are pursuing certifications as nurses or in allied medical professions, I have tried to insinuate descriptions and depictions of actual wars' actual tolls -- from a healthcare standpoint, through literature and film.

Every few semesters, I try to work in chapters from The English Patient - the whole novel proving to be a bit too challenging for many who are immersed in anatomy and physiology, and a host of other "ologies" along with clinical postings.

I came to the novel via the film. When the Academy of Motion Picture Arts and Sciences honored the film adaptation with nine Oscars, I was about to turn 50 -- and I was forever smitten with Juliette Binoche and Kristin Scott Thomas.

As a devotee, I read and re-read the novel, which does pose challenges, with shifting scenes and identifications. I was keen on sorting out the story's time frames, explorations, and accusations. I hoped (still hope) to learn how to weave lives and times, as a story-teller. The English Patient continues to be instructive.

For students, I skirted many of the book's challenges by playing a few scenes from the audio-book recording, with Christopher Cazenove convincingly voicing males and females. For accompaniment, I typed up a few excerpts from the novel in the hope that those "takes" might whet appetites of reluctant readers.

Here is a much expanded version of what I offered to students:

A healer in need of healing
Beginning in 1943, after training at Toronto's Women's College Hospital, nurse Hana followed the First Canadian Infantry Division to the invasion of Sicily and as it worked its way up Italy.

"The destroyed bodies were fed back to the field hospitals like mud passed back by tunnellers in the dark."

Day and night, she was surrounded by, laid siege to by, war wounds. As "the thermometer of blood moved up the country... she feared the day she would remove blood from a patient's face and discover her father or someone who had served her food across a counter in Toronto.... She swabbed arms that kept bleeding."

"Some men had unwound their last knot of life in her arms....

she had lifted live men to discover they were already being consumed by worms.... she had held cigarettes to the mouth of the boy with no arms.... She had continued her duties while she secretly pulled her personal self back. So many nurses had turned into emotionally-disturbed handmaidens of the war."

A listening heart
The pilot who has suffered incapacitating burns from head to toe - the man referred to as "the English patient" - has the great good fortune to be the recipient of the caregiving devotions of Hana, the 20-year-old nurse who has lost family, lovers, and her mind, in the course of treating so many wounded.

The burned patient becomes her salvation - the cover for her retreat. They hole up in a bomb-torn villa, a former nunnery, where he whispers recollections, ancient histories, and wisdom to her: "dragging the listening heart of the young nurse beside him to wherever his mind is, into that well of memory he kept plunging into during those months before he died."

Hana reads to the patient from whatever book she is able to retrieve from library shelves that have become rain-soaked and unstable. "He listens to her, swallowing her words like water." His company quenches her need for companionship divorced from war. Her focused duties stanch her disarray and despair.

The sanctuary
Hana abandoned a troop convoy, and the war, by having the English patient brought to a hilltop Tuscan villa (twenty miles north of Florence) that has "adapted itself to mortar-shell wounds, accepting the habits of weather, evening stars, and the sound of birds."

Novelist Michael Ondaatje invites the reader to see "doors that open into landscape.... some rooms have become an open aviary." There is no running water, there is no electricity.

While there is candlelight and lantern light, "the only overhead light pours through the jagged mortar circle that looks onto the sky."

Ondaatje pictured a hilltop retreat where there is "little demarcation between house and landscape, between damaged building and the burned and shelled remnants of the earth." He lets the reader know that to Hana, "the wild gardens were like further rooms."

The villa, like many others, had billeted troops, been abandoned by troops, had been turned into a war hospital, and then relinquished those who could be evacuated.

Ondaatje tells us that these nunneries and churches and villas "hold the remnants of war societies, small moraines left by a vast glacier."

Interiors and Exteriors
The novel's word pictures take us to high chapel walls and skyward under chapel domes to view immense frescoes. We view the art work, lit by phosphorous flares, up-close-and-personal via rope, block, tackle, pulleys, and such, which are otherwise employed for perilous bomb-disposal work. These scenes were filmed in Italy.

Scenes filmed in Tunisia transcribe the novel's portrayals of deserts -- their expanse, complexions, and mysteries. Deserts are tapestries "carried by winds but never held down by stones." There are the terrors of a burying sandstorm -- as "the sky is shut out... the universe is filled."

With prodigious research and a poetic flair, Ondaatje lets us know that "in the emptiness of deserts you are always surrounded by lost history."

In his vivid recitations of seemingly lost histories, the English patient takes Hana on journeys - she "travels like a squire beside him."

that in his expeditions in the Gilf Kebir (the Libyan Desert) in search of the lost oasis of Zerzura, he might have been the first white eye to see mesmerizing ancient rock-cave paintings, or a mountain that had been there forever.

Theaters of war, and war's dramas

Ondaatje writes that "In 1939 the great decade of Libyan Desert expeditions came to an end, and this vast and silent pocket of the earth became one of the theatres of war."

Ondaatje has the English patient rail that "the desert has been raped by war, shelled as if it were just sand. Barbarians versus Barbarians." A prescient lament?

It would not be unfair to assume that the patient is speaking for Ondaatje. Indeed, barbarians, and fanaticism, seem to have overrun the sands so very prized by the English patient.

In The English Patient, Ondaatje wrote that, in Italy, "the German army had mined many of the houses they retreated from." He delivered extraordinarily detailed - and authentic - descriptions of insidious delayed-action fuses and subterfuges ("jokers") meant to confound (and annihilate) British sappers tasked with deactivating unexploded bombs and 1945-vintage IEDs, before they killed wantonly and indiscriminately. We recognize a "hurt locker."

Lurking just around the corner
In The English Patient, those mapping the desert and leading expeditions in search of sand seas sensed that, months before the formal declarations, "war was around the corner."

As the 70th anniversary of the end of the war in Europe is rightly celebrated, we seem to be only steps away (in the Ukraine, the Middle East, Africa, and the Korean Peninsula) from a 21st century corner, and "storms" that would create new deserts.

Saved by potions from the past
Consumed in flame, the English patient's biplane had dropped and plowed through desert sands - "breaking the sparseness of the desert" - that had not been previously churned by a flying machine.

His leather helmet aflame, he managed to stumble away from the crash, with his head on fire. Bedouin rescued him: "plucked the antlered hat of fire from his head" and placed him on "an altar of hammock." Masks of felt and oasis reeds were placed gently over what was left of his face, stymying further decomposition.

A nomadic healer materializes. At first, the healer appeared only as a head on a table that was moving toward the charred pilot. The healer (a naturopath) wore "a six-foot yoke from which hung hundreds of small bottles suspended from different lengths of string and wire." The ointments within that mobile apothecary of cork-plugged glass bottles had been warmed by the sun, so that when a potion was rubbed onto skin, it "seemed to have been heated especially for the wound."

The novel's annointments and antidotes
Modern medicine and healing techniques may well be more effective and available than much of the nomadic healer's "curtain of bottles." But then modern weaponry and warfare have advanced and proliferated, creating a new range of ills. Novels that take us to other times and places can be thought of as antidotes.

The English patient has a prescription for getting the most from each milligram of prose. He "suggests" that Hana read Kipling slowly, at a pace comparable to the speed of Kipling's pen on paper; a pen that required periodic refilling from an ink well. 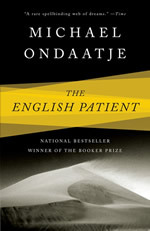 The English Patient is not a page-turner; shouldn't be. It's an expedition - and its finds and treasures are best discovered and discerned at a measured pace, as if the stories had been written with a century-old fountain pen. As such, for a time, they inoculate us against current horrors by administering doses of history, geography, botany, anthropology, archaeology, mystery and intrigue.

By a desert fire, "if a man leaned back a few inches he would disappear into darkness." With so much darkness in present-day deserts, perhaps novels can shed some light.