MILWAUKEE, May 2 (Reuters) - An unseasonable May storm system dropped more than a foot of snow across the central Plains and the upper Midwest on Thursday, closing roads and causing power outages in Iowa, Minnesota and Wisconsin.

The winter storm system has delivered about 18 inches (46 cm) of snow across parts of northwest Wisconsin and more than 15 inches in southern Minnesota, according to the National Weather Service.

"The northernmost areas have seen snow in May before, but not of this magnitude," said Jim Keeney, a meteorologist for the National Weather Service.

Temperatures fell close to 30 degrees Fahrenheit (minus 1 degree Celsius), making for a heavy, wet snow that downed trees and caused power outages and road closures. The snowfall will likely break seasonal records in portions of Wisconsin and Minnesota, Keeney said.

"We are getting pounded with a bunch of snow," said Gwen Rosengarten, a dispatcher for sheriff's department in Bayfield County, Wisconsin where about a foot of snow has fallen.

Rosengarten said traveling was difficult as many roads throughout the area remain slick and covered by snow.

But more than half of the 54,000 Wisconsin and Minnesota customers who experienced power outages due to the storm had their services restored by Thursday afternoon, according to Xcel Energy.

Because of the weather and hazardous road conditions, however, some customers may have to wait until the end of day on Friday to have their power back, the power company added.

In Iowa, three cities topped a 66-year-old record for the heaviest snowfall in May. Britt and Forest City both reported a snow depth of 11 inches and Algona reported 10.5 inches. The previous record of 10 inches was on May 28, 1947, in Le Mars, Iowa.

"This was a tough system to judge in that there was such a tight gradient between the rain, freezing rain, and snow," said Kurt Kotenberg, a meteorologist with the National Weather Service.

"Then, this cold front really stalled out over central Iowa and it just kept snowing and snowing. It just didn't really stop in some places."

The National Weather Service has issued winter storm warnings from southeast Minnesota to northwest Wisconsin and weather advisories for eastern Colorado and the upper Midwest that will continue throughout Thursday.

Total snow accumulation was expected to be 10 to 20 inches in the Rockies with up to 6 inches in the Denver area, the National Weather Service said. Between 2 and 6 inches of snow was predicted for parts of the central plains and the upper Midwest.

Trace amounts of snow in the panhandles of Texas and Oklahoma were reported on Thursday morning, but there was little accumulation because the ground was too warm, said Tabatha Seymore, observing program leader at the National Weather Service in Amarillo.

Southeast of the system, more than 10 inches of rain fell in parts of Mississippi and Alabama on Wednesday into Thursday, and rising floodwaters encroached on homes and stranded cars in southeast Mississippi.

Police rescued a woman stranded in her car who was taking her young son to the hospital for lightening strike injuries on Wednesday night. The boy had non life-threatening injuries, local news channels said.

On Thursday, a traffic stop in Vancleave, Mississippi turned into a rescue when the car of a woman pulled over for speeding slid over an embankment into high water, according to the Jackson County Sheriff's Department.

She and her three children were pulled from the rising waters and transported by ambulance to a local hospital, where they were treated for minor injuries. 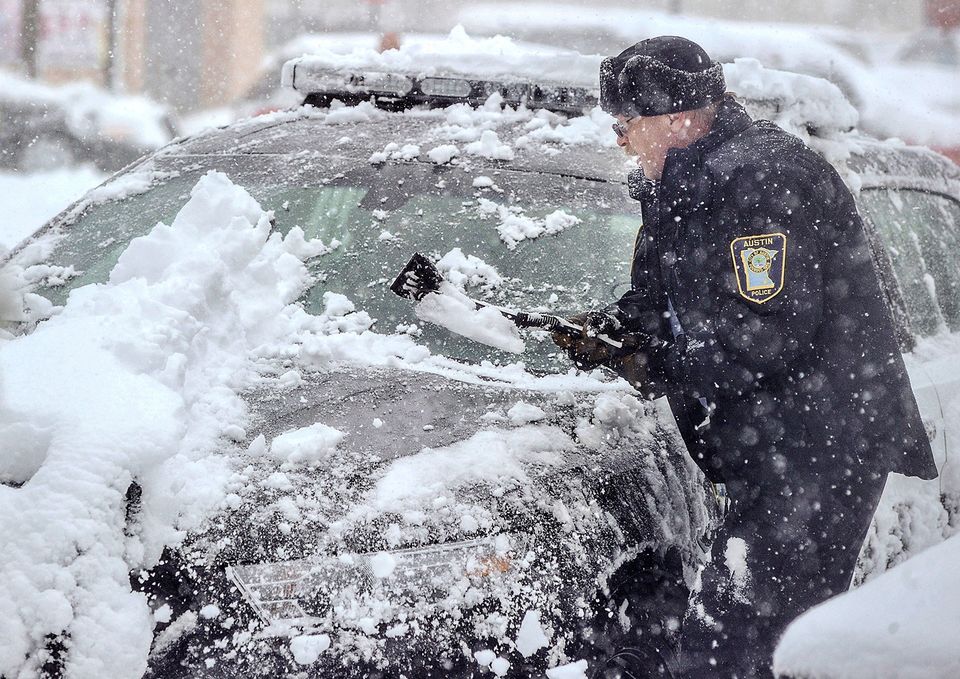 1 / 8
Austin Police's Sgt. Joe Milli clears heavy snow off his police cruiser Thursday morning, May 2, 2013 behind the Law Enforcement Center in Austin, Minn. Winter made a return appearance in southeastern Minnesota where residents are digging out of more than a foot of new snow. (AP Photo/Austin Daily Herald, Eric Johnson)
AP