From "Roots" to "Sesame Street", she was a leader who taught me how to be a "Phenomenal Woman." She won three Grammys, spoke six languages, and ushered a U.S. President into office through a poem. She inspired me to master the English language, so I could help humanity embrace science. This inspiriting woman was Maya Angelou who died May 28, 2014, at the age of 86. Maya Angelou was an amazing woman, because she had courage to be unique, boldness in her expression, and cared about humanity. 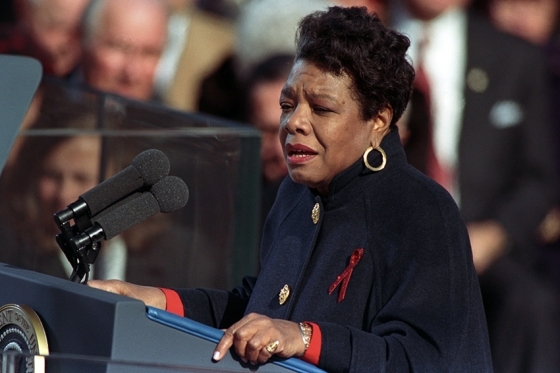 Image from the WhiteHouse.gov

Maya Angelou defied categorization and every stereotype. Although her formal education ended in high school, she wrote 36 books. Through her humanitarian contributions, Maya Angelou was awarded more than 30 honorary degrees from colleges and universities. She insisted on being called "Dr. Angelou." She was an actress, director, playwright, composer, singer and dancer. She inspired great leaders such as Martin Luther King Jr., Malcolm X, Oprah Winfrey, U.S. President Bill Clinton and U.S. President Barack Obama. She inspired millions of people, because she committed herself to expressing the truth.

As a rocket scientist who specializes in numbers and logic, I first embraced Maya Angelou at the age of 17. I was finally old enough to follow politics and to appreciate presidential elections. When I saw Maya Angelou recite her poem during U.S. President Bill Clinton's inauguration, I knew I could be like her. She was a Woman of Color who was well-spoken, intelligent and respected. And most importantly, she had powerful words to share. She embodied leadership, and I knew that I could lead like her.

Years past, and I decided to follow my passion, studying mathematics. I was an undergraduate student attending California State University Northridge, and she was an invited speaker. Excited to see this phenomenal woman in person, I purchased tickets immediately. There, with my mother, I heard Maya Angelou share inspiring words, "You must always follow your passions, no matter the cost."

My passions are science and helping people. Her words inspired me to continue overcoming adversity, triumphing on my road to being a Woman of Color in rocket science. I used her life as a role model for my scientific calling. I too could express math and science, and "make it sing." Other than the late Albert Einstein, no other person could make science sound like music. Maya Angelou inspired me to write my book Mathaphobia and communicate science in a way that would calm the souls of many.

Lastly Maya Angelou's poem "Phenomenal Woman" forever changed the way women were viewed. And it transformed the way I viewed my professional self. As a woman who worked in a male-dominated environment, I was the only woman on some NASA technical projects at times. However, I refused to cut my hair short and de-emphasize my figure like some other women. I was an attractive young woman. And I learned to value my feminine, logical intelligence that I carried into the workplace. I remembered Maya Angelou's words:

"...I walk into a room
Just as cool as you please,
And to a man,
The fellows stand or
Fall down on their knees.
Then they swarm around me,
A hive of honey bees.
I say,
It's the fire in my eyes,
And the flash of my teeth,
The swing in my waist,
And the joy in my feet.
I'm a woman
Phenomenally.
Phenomenal woman,
That's me."

Through Maya Angelou's life, I, Olympia LePoint, was forever transformed. Now, I use her teachings to transform others in STEM literacy. Dr. Angelou will be forever missed. R.I.P. Maya Angelou.