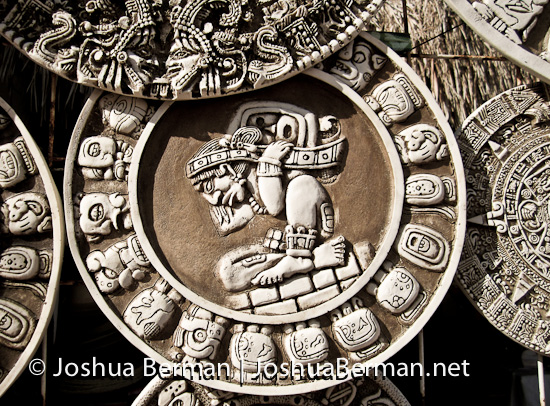 The event has captured the world's curiosity and imagination, and this week, all eyes are on Mesoamerica: i.e. southern Mexico, Guatemala, Belize and parts of Honduras and El Salvador. That's where the Maya culture reigned during the Classic Period (about 200-900 A.D.) and where most of the 10 million or so living Maya reside today. So much attention being showered on the Maya people and their history, cosmology and culture presents an opportunity to ask a few questions.

A b'aktun is a period of 144,000 days (about 393 years) in the Long Count. It is an especially important unit, "used for describing the creations of humans and of the world," as Guatemalan writer Gaspar Pedro González says. Some historians, looking at the historical record, have argued that there is a correlation between major world events and b'aktun endings.

Thirteen is a sacred number for the Maya, so the completion of 13 b'aktuns, or 1,872,000 days, lends even more import to December 21, 2012. The fact that the Maya may have pegged this end date to a winter solstice (using only naked eye astronomy while taking precession into account, the earth's leapyear-causing wobble) is, for some, additional evidence of some kind of intention by the ancient Maya.

Others are not so convinced and most (but not all) mainstream academic Mayanists say there is zero evidence of any intention or prophecy. So put down that survivalist manual, ignore Hodgman's advice to hoard urine and Mayonnaise and instead buy some books or maybe even plane tickets to a Maya country.

The Maya's observations of celestial cycles inspired a complex system of interlocking calendars of various lengths. Maya day-keepers, as their priests are known, built the cycles into a Long Count, or 5,125-year period of time, which they projected backward to begin on August 11, 3114 B.C. and forward to end on December 21, 2012. The Long Count is both calendar and historical record.

The calculations were made at least 1,300 years ago in southern Mexico (perhaps even earlier by pre-Maya Olmec cultures). The dates were scrawled into stone stelae and temple walls, then lay hidden for many centuries and are still being unearthed and deciphered today. Entire books are dedicated to explaining the unique and complex base-20 Maya calendar system -- Barbara Tedlock's Time and the Highland Maya is a standard on the subject.

Dr. Edwin Barnhart, Director of the Maya Exploration Center, writes about the Maya's affinity for "calculating the lowest common multiples and highest common divisors between the celestial cycles they were tracking." He says, "I believe the Long Count allowed them to tease those temporal conjunctions out and that they viewed them as the hidden synchronicities of the cosmos."

But if the purpose of the Long Count was not to pinpoint a transition at its end, then what was it?

John Major Jenkins, an independent researcher and author, thinks the answer is in the sky. He has written several books laying out the evidence for his galactic alignment theory, which states that the Maya selected 2012 as the end of their Long Count to correspond to future astronomical phenomena. His work is heavily based on the architecture, writing and layout of Izapa archaeological zone in southwest Chiapas, Mexico.

Within the multidisciplinary world of "2012ology," theories span the gamut from serious academic discussions by glyph-deciphering Maya geeks to theorists who think that, on December 21, 2012, a magnetic phenomenon caused by the sun will trigger all human pineal glands to release a hallucinogen resulting in a mass humanity-wide acid trip.

Other curious non-Maya-based theories predict Atlantis will rise, solar flares will explode and extraterrestrials will return to Earth to beam away the chosen ones (actually, this last one is supposed to happen in the village of Bugarach, France; seriously).

Some would simplify the 2012 debate as "believers vs. non-believers," or "those who think something will happen vs. those who don't." The believers' side is a big tent, including talk of subtle harmonic energy elevations to collisions with asteroids, solar flares, extraterrestrials and Planet X.

Most, but not all, academics and Maya scholars acknowledge that the Maya Long Count does indeed have an end-date that correlates to December 21, 2012. Except that it's not an "end date" and the Maya never said anything about a 2012 apocalypse. The date just played into their number games, say the skeptics -- in the same ballpark, in fact, as that cartoon with the Maya scribe, chisel in hand, who runs out of space on the tablet and says, "That'll freak somebody out some day."

There is no doubt that the beginnings and endings of cycles were big news for the Classic Maya -- the bigger the cycle, the bigger the news. Some alarmists point hysterically to a particularly Armageddony line in the Popol Vuh, the sacred Maya book, which translates to something like, "It will rain fire, burning stones; the Earth will lift up; there will be floods that will put an end to humanity, to those who have vitiated the Earth." Though these events are not tied to 13 b'aktun or 2012 in the Popol Vuh, it's still tantalizing stuff, especially for custom bunker salesmen and the ever-present micro-population of our culture that always needs a coming apocalypse to hang to their gas masks on.

The apocalypse stuff really annoys serious Mayanists. After the 2011 Maya Meetings in Austin, Texas, which addressed this discussion, Dr. Robert Sitler, author of The Living Maya, reported that "the academic community has consistently described the international interest in the year 2012 and Mayan calendrics as a poorly informed product of misguided New Age ideologies with few substantive connections to the Mayan world." He continued, "Scholars are especially upset with extremist claims that 2012 will mark the end of the Mayan calendar and even the end of the world itself."

These thoughts are echoed in Mark Van Stone's book, 2012: Science and Prophecy of the Ancient Maya. "There is nothing in the Maya or Aztec or ancient Mesoamerican prophecy," he writes, "to suggest that they prophesied a sudden or major change of any sort in 2012." He argues that 13 b'aktuns was just another period-ending, and points to even longer counts at Palenque, including one indicating that 20 b'aktuns, not 13, is the actual length of the Long Count. Another text there has an inscribed date correlating to A.D. 4772, proving, says Van Stone, that the people of Palenque not only expected to survive 13.0.0.0.0 (December 21, 2012), but to worship their kings and gods for thousands of years after that.

"This is about the clearest message they gave us," Van Stone says, "that they (like us) could not imagine the End of their Culture, they expected it to live forever. Perhaps you could call this a static-cyclical conception of time. I call it normal human self-awareness."

What Do the Maya Say?

As December 21, 2012 approaches, some communities in Mexico and Guatemala have sent delegations of Maya elders abroad to address global concerns about 2012. I attended one talk by a K'iche' elder in a community center outside Denver, Colorado, in 2011. He had come, he said, as a messenger from his grandfathers in the mountains of Guatemala with this message about 2012:

"A better world is possible! That is my grano de maiz," my grain of corn, he said, "as we enter the age of the fifth sun." He told us about a school they were building in his village and of the ceremonies they were performing to prepare all of humanity for the upcoming transition.

"You are invited," he told the crowd of about 200 people. "The elders have opened the doors for whenever you'd like to come. Maya spirituality is for everyone. It is universal, it is not just for one group."

Dr. Jaime Awe, Director of Belize's Institute of Archaeology and part Maya himself, says that 2012 "represents the ending of one cosmological cycle, and the beginning of another. It's very much the way most people would look at the end of one year and the beginning of another, but over a very, very long period of time. It is a time for reflection, and for considering future direction."

Ways to learn more and connect

I wasn't joking about those plane tickets. It's easy to fly to Cancun or Merida in Mexico, or to Belize City or Guatemala City, all of which are solid hubs for exploring Maya archaeological sites and modern Maya villages.

Travel independently, or sign up with a Maya world tour specialist. Get out. Go slow. Talk to people. Hire a guide. Buy Maya products directly from their creators -- like Maya Bags or Cyrila's Chocolate. Support Maya-run community-based tourism projects. Travel now, travel well and travel well into the 14th b'aktun. 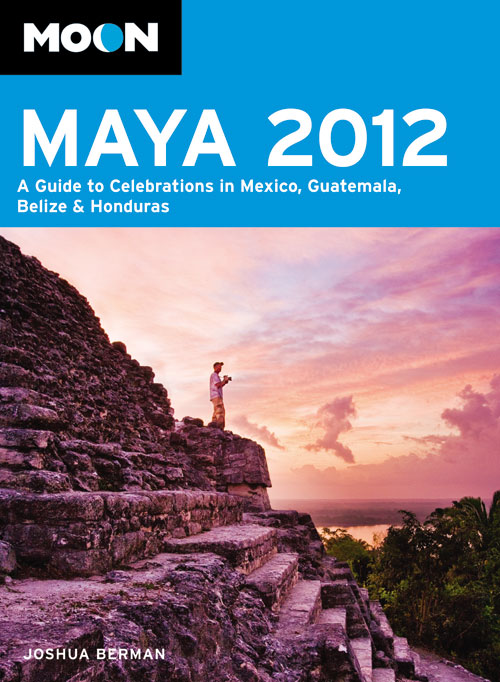 Joshua Berman is a columnist for the Denver Post and the author of Moon Belize and Maya 2012: A Guide to Celebrations in Mexico, Guatemala, Belize & Honduras. His website is joshuaberman.net. This article originally appeared on this blog, The Tranquilo Traveler.