Much has been made of the so-called 2012 Mayan apocalypse. But for the real Maya people, the end of the world came slowly and timed with historic droughts.

A new, ultra-detailed climate record from a cave in Belize reveals Classic Maya civilization collapsed over centuries as rain dried up, disrupting agriculture and causing instability that led to wars and the crumbling of large cities. A final major drought after the political collapse of the Maya may be what kept the civilization from bouncing back.

"Even fairly subtle shifts initially in climate toward drying appear to have pretty significant ramifications for the social and political fabric of the Maya world," said study researcher Douglas Kennett, an environmental anthropologist at Pennsylvania State University.

The end of the Maya

Kennett and an international group of colleagues — including climate scientists, archaeologists and experts in Mayan writing — are not the first to suggest dry spells brought about the end of the Maya. The Maya lived across southern Mexico and northern Central America; at their height during the Classic Maya period from about A.D. 300 to 1000, they gathered in complex cities of up to 60,000 people. They built stone monuments, water-storage systems and a complicated astronomical calendar, which has been widely misinterpreted to predict the end of the world this December.

Researchers have used geological records of climate from lake sediments to uncover evidence of drought, but the new study uses a cave formation to trace a 2,000-year history of rainfall in more detail than ever before. Researchers removed a stalagmite from the ground of the cave in a layer that sits close to a number of Classic Maya settlements. This stalagmite had been growing slowly but continuously from 40 B.C. to A.D. 2006. [10 Ways Weather Changed History] 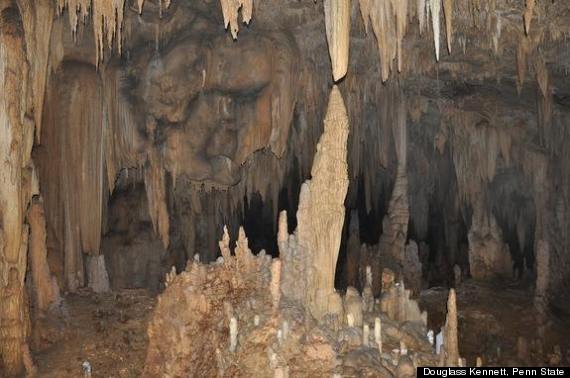 Stalagmites form from calcium carbonate and other minerals left behind when drips of water move through a cave and evaporate. Researchers can use uranium-thorium dating (based on those radioactive elements' rates of decay) to peg down the age of each layer of a stalagmite. They also can use isotopes, or variants of chemical elements, to determine how wet it was when each layer was laid down. (Heavy rainfall carries different isotopes than light rain does.)

By analyzing the stalagmite, researchers were able to pin down rainfall levels twice a year for 2,000 years. They found that during the early period of Classic Maya civilization, this region of the world was abnormally wet. Abundant rainfall would have favored the expansion of the Maya's empire, Kennett told LiveScience. And sure enough, wet periods in the climate record coincided with eras of expansion, building and stone monument construction according to the archaeological record. [Images: Stunning Maya Murals]

After about A.D. 660, however, things began to change. The overall climate started to get drier, with more frequent short-term droughts.

"That's when you also start seeing some indications that there are stresses in the overall system," Kennett said. War became more frequent, and some cities began to collapse as people moved out of population centers. It was the beginning, Kennett said, of what looks like a two-stage collapse. 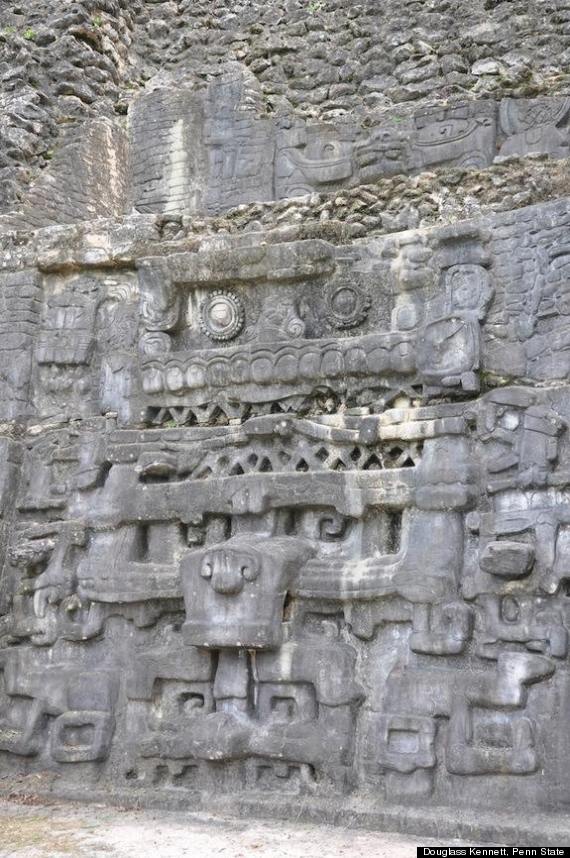 An example of the elaborate stone carvings made by Classical Mayans. This frieze is in Caracol, Belize.

By between 820 and 870, the Maya were struggling to get by on 40 percent less rainfall than before the drying period, the researchers report in Friday's (Nov. 9) issue of the journal Science. This period, known as the Terminal Classic, was less stable than ever before. People began abandoning cities. Building campaigns ceased. Fewer and fewer stone monuments were erected.

"It's not all at once," Kennett said. "It's an asynchronous thing. It's happening over a couple of centuries."

After major political systems failed, smaller agricultural communities survived into the 1100s and 1200s, Kennett said. It may have been a second phase of collapse that prevented these small groups from rebuilding their once-great civilization. Between about 1020 and 1100, the researchers found, there was an enormous, crippling drought — the biggest in the entire 2,000 years of the cave record.

"Political systems fail, but then usually something comes back and sometimes they're even bigger, more integrated. That's a pattern you see," Kennett said. "That just doesn't really happen in the Maya region."

The droughts were an example of climate change driven by natural cycles, Kennett said. (Other research has suggested the Maya exacerbated the problem by deforestation and other activities.) The Maya may have been driven by fluctuations in the intertropical convergence zone, a climate zone that sits along the equator. When the zone is positioned farther north, you get wetter conditions in Central America, and when it moves more southerly, rainfall dries up.

The dry periods and droughts would have set the stage for the mysteriously abandoned cities the Spanish found when they arrived in the region in the 1500s, Kennett said.

"That's part of the fascination, I think, with the Maya," he said. "You have these elaborate cities with stone monuments, with a calendar system and a sophisticated hieroglyphic writing system, and then that just goes away."