These walls have eyes. An entire procession of eyes, noses, and ears belonging to the painted figures dressed in traditional Maya and Spanish fashion that a Guatemalan family found in their home five years ago, according to National Geographic News.

Lucas Asicona Ramirez and his family discovered the Maya Murals in their kitchen while renovating their home. Jarosław Źrałka, the archaeologist who recently reported his finds to National Geographic, said the images had been covered under plaster for centuries.

CHECK OUT IMAGES OF THE MAYA MURALS BELOW

(Click here to view the entire gallery at NationalGeographic.com)

The discovery came from a house in the Guatemalan village of Chajul and experts say these murals most likely belonged to a prominent figure in the past.

It seems that failing to put the past behind you can be quite illuminating. 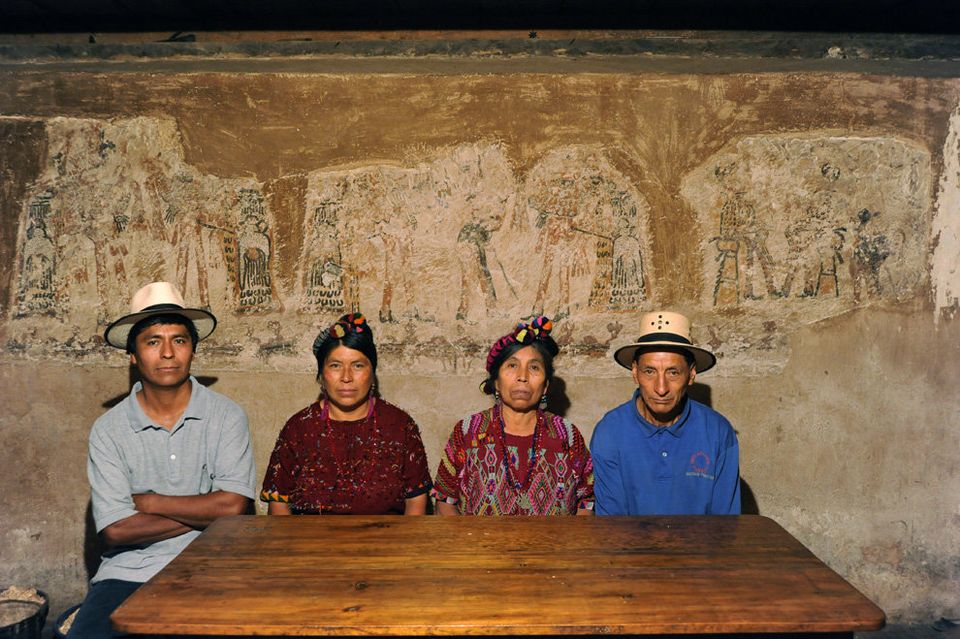 1 / 4
Maya Murals Found in Family Kitchen
<strong>Read more about the find at <a href="http://news.nationalgeographic.com/news/2012/09/pictures/120905-maya-murals-found-kitchen-science-mayan/">NationalGeographic.com</a></strong> If these walls could talk, they'd solve a Maya mystery. Five years ago Lucas Asicona Ramírez (far right, pictured with family) began scraping his walls while renovating his home in the Guatemalan village of Chajul. As the plaster fell away, a multi-wall Maya mural saw light for the first time in centuries, according to archaeologist Jarosław Źrałka, who recently revealed the finds to National Geographic News. The paintings depict figures in procession, wearing a mix of traditional Maya and Spanish garb. Some may be holding human hearts, said Źrałka, who was working on the other side of Guatemala when a colleague tipped him off to the kitchen murals. The recent exposure has faded the art considerably, leaving precious little time to unlock their secrets, he added. That the paintings endure at all is "a fairly remarkable thing," according to Boston University archaeologist William Saturno, who examined pictures of the murals at National Geographic News's request and believes the art to be authentic. "We don't get a lot of this type of artwork; it's not commonly preserved in the New World," said Saturno, a National Geographic grantee. "It'd be neat to see who the folks were who painted on the wall and why." <strong>Read more about the find at <a href="http://news.nationalgeographic.com/news/2012/09/pictures/120905-maya-murals-found-kitchen-science-mayan/">NationalGeographic.com</a></strong>
Photograph by Robert Slabonski