Modern Belize is small enough that passengers on my Belize City-bound Delta flight spent nearly half an hour before takeoff figuring out how they knew each other's relations, assuming that they must. They did, but it's no surprise given that this territorially tiny country is home to about 300,000 people benignly organized into racial subsets: Taiwanese small business owners, Low German-speaking Mennonite farmers, creole-slinging slave descendants. This file-folder diversity is charming, but it is also the result of a great homogenous loss.

Before the Spanish explored Belize and the English colonized the Mosquito Coast with a rash of mahogany camps, roughly twice as many people lived here as do today. They were Mayan, and this was arguably the heart of their empire.

The most obvious evidence of Belize's Mayan past are signs denoting natural wonders named with a surfeit of hissing Xs and guttural Us. Also the ruins. The ruins are towering and strange, their strangeness highlighted by the communities around them. Where Americans traveling in Mexico experience Teotehicuan as an unusually strange destination within a strange land defined by a foreign-and-mestizo history, travelers to Belize are given directions to the ruins in clear English from the stoops of clapboard homes.

Within the context of towns quaintly named Ladyville, Teakettle and Blackman Eddy by the English, the pyramids' photogenic qualities are rendered eerie by a juxtaposition with recognizable modernity. The temples of Xunantunich, devoted to the lords of the underworld, sit just off a highway boasting a roadhouse named "Cheers."

Xunantunich is not merely a relic. The Castillo, as the largest pyramid at the site is known, and the lawns in front of it sit on centuries worth of buildings. A stella showing the bottom half of a warrior found and displayed at the site dates from B.C. 150. The Maya were here for a very long time and -- at least on the scale of their own history -- until quite recently. They lingered long enough to flatten the top of a mountain for their city and to construct massive pyramids without the aid of the wheel or, for that matter, thousands of Jews.

Then they were gone.

From the top of the Castillo, Guatemala stretches off to the west and the greenery of the Cayo District's hills fades toward the acidic coastal pampas to the east. Brush fires send off massive columns of smoke just across the border and plantation-style hotels are visible a few miles down the road. The land is predominantly wild and the habitations visible are, with very few exceptions, not Mayan.

As neurotics and new agers blanche at the so-called Mayan Apocalypse scheduled for December 21, it is worth noting that the Mayan Apocalypse already happened. When the Old World and this New World collided, this New World withered. Mundo Maya, the term now used for the area encompassing Mexico's Yucatan, Northern Guatemala, most of Belize and a bit of Nicaragua, is a misnomer. This land is no longer the world of the Maya.

But their fate -- not to disappear but to falter on a massive and incalculable scale -- gives credence to the perceived threat of the 21st. A thriving culture's doomsday predictions would frighten few, but the Mayan calendar in all its unwieldy circularity seems like a bitter curse cast by the vanquished, the last incantation of a dying witch.

The small Mayan town at the foot of Xunantunich takes such indigenous curses seriously. The locals refused to visit the ruins of their empire for generations thanks to a story about a sorceress or ghost, the story that gave the site its name, which means "Stone Lady." There was great peril amid the stones and chipping plaster of the ruins so they remained hidden until an English doctor turned explorer wandered onto the scene and started excavating with dynamite.

On the day I visited, slippery stairs were the most obvious threat, and an American yoga teacher in LuluLemon was filming a special in one of the massive courtyards. Still, there was something about the place that spoke to both hubris and nemesis. This world didn't simply vanish -- it was actively ended through concerted effort -- but it was easy to see where the village myth had come from. Xunantunich, a shorn-off mountain top adorned by a stone crown, was a pompous challenge to this world.

The world, perhaps inevitability, had accepted. 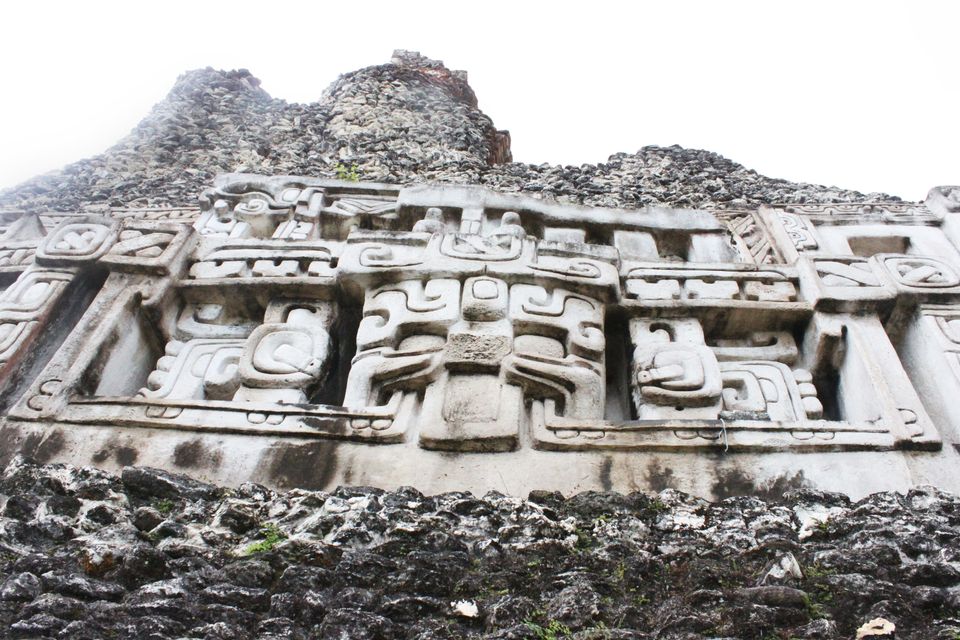