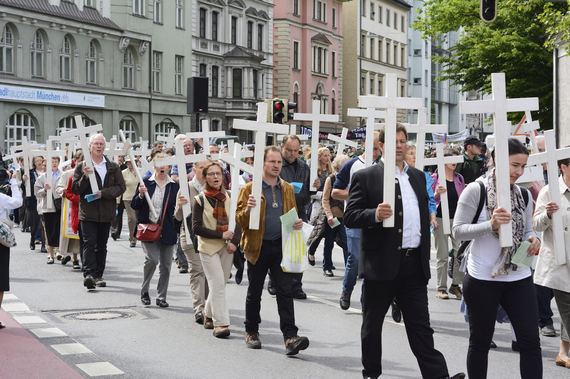 Earlier today, as I write this, the Supreme Court delivered their gay marriage ruling. My Facebook feed has been surprisingly noncombative. I have lots of lefty friends, so there's no surprise there. But until recently I was a part of an evangelical denomination that frowned on churches like mine that refused to exclude gay people from full participation. Lots of those pastors are on my feed. Until today, one only had to suggest that following Jesus was an awesome thing for pretty much everyone to do--even for gay people to do!--and one could watch the comments stream in. (It's possible the comments here will illustrate this.) But, at the moment, my conciliatory Facebook feed seems like a marker of how quickly we church people are trying to find our way into a new world.

In the late 90s, I helped start a church in very secular Cambridge, Massachusetts and our fast growth among previously non-churchgoing people got us interest from around the country. Even before the Pew Research people confirmed this, it turned out that lots of church people wondered if America would follow Western Europe (and all of their colonies) in moving from being the seat of Christendom to being the center of secularism. Were that to happen, what options could churches pursue?

By the mid-19th-century, church people felt like pre-modern dummies. The scientific method seemed to invalidate miracles, which seemed to invalidate the whole idea of a supernatural God, which seemed to invalidate Christianity. Trying to adapt to that, some church people argued that, at the very least, Jesus was a great picture of a good citizen worth modeling ourselves after. Others took a different tack and argued that the Bible itself was the greatest scientific principle of all--the atom of pure truth that couldn't be split. The first group dominated the early part of the 20th century and became known as liberal Christians. The second put words like "Bible" in their name on the way to dominating the second half of the 20th century as conservatives.

But the Pew people and the eyeball test suggest that both projects are fading. Mainline, liberal churches have lost members annually for over two generations. According to the recent Pew study, since 2007 evangelicals have held steady in terms of raw numbers, but have lost in terms of percentages. (Robert Putnam and David Campbell, in American Grace: How Religion Divides and Unites Us, tell us that evangelicalism started a steady decline in 1992.) By far the fastest-growing American "religion" is the "nones" (those who check "no religion" on surveys). And conservative Christians find themselves on the outside both of social trends and the broader cultural conversation. My conservative pastor friends tell me this is galling.

Churches like mine in Cambridge claimed something that, as I've mentioned, vexed our friends. Like them, connecting with a powerful, loving, communicating God was at the center of our enterprise. But unlike them, it was the entire enterprise. What we, along with our historic Christian brothers and sisters, were claiming was that following Jesus was so good and so powerful that it was good medicine for all people. It's that last clause that caused trouble with my evangelical friends. The conservative Christian enterprise has two foci: (1) connecting themselves and others to Jesus, and (2) defining "sin," defining what will exclude people from God's love.

To my mind, an over-emphasis on (2) has swamped (1). To say the least, this is a shame. And it highlights the dilemma faced by so many of my good-hearted clergy friends around gay marriage. Of course they believe God loves gay people as God loves all people. But boundary-setting has taken over their message.

But are our only two choices modern Christian liberalism or modern Christian conservatism? Aren't both, after all, "modern"--a part of our history which has only been around for a few hundred years (and is now faltering in ways well beyond church life)? Is there any wisdom in recentering ourselves around the very much alive, very much communicative person of Jesus? The same Jesus who commanded us not to try to separate the "weeds" from the "wheat"--the damned from the saved--because we were sure to botch it?

The prime command to people trying to follow the God of the Bible has always been to be "a light to all nations." And the primary temptation has always been to draw a circle around our own culture and baptize it as the one God loves--and then to draw our guns against our neighbors.

Jesus picks up the light-to-the-nations language and hones it, saying "Lift me up and I will draw all people to myself." Many hundreds of previously non-churchgoing people in Cambridge discovered the power in this. It turns out that Jesus is in fact the real deal. Maybe what's happened in all those European countries and colonies--and might be accelerating here--isn't a comment on the failures of Christianity but on the winding down of modernist Christianity.

I've just found myself so happy for my gay friends today. For all the problems in my life, this has felt like such a ray of sunshine. As a church leader, it feels so great to cheer people on towards a hopeful, connected life rather than to, "with regret," need to be the killjoy telling them why they can't be happy. There are other options than abandoning pursuit of the living, powerful, communicating God or giving seventy percent of our focus to what is or isn't sin. There's more to life than being theologically liberal or theologically conservative.

There's pointing people towards the amazing Jesus and, alongside them, rejoicing as he draws all people to himself.