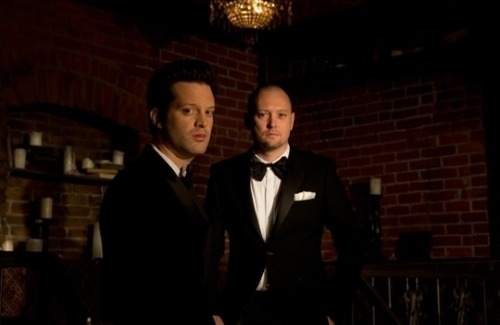 "I think that there is so much Nate Dogg on this record," says Mayer Hawthorne, one half of Tuxedo with producer Jake One, about the inspiration behind the album. "He was a massive influence on the making of this record. Even though Nate Dogg is no longer with us and nobody is really making records like from the early 80s either, the combination of those two is what made it 2015"

This Tuxedo project, that really wasn't anybody in particular's idea to start, is essentially that classic 1980s boogie sound with the healthy dash of that good ol' 1990s west coast gangsta funk. "It's really something that makes you feel good but it's not soft," says Jake One. "I think that's missing in music in general."

They weren't shooting to have a long record (spans a lean and mean 12 tracks) and originally was only going to feature 8 songs, but it was hard to narrow it down from the upwards of 40 tracks they recorded.

Tuxedo is an album about having fun and just letting loose on the dance floor. Mayer Hawthorne and Jake One just enjoyed making it and it's evident in the music and everything they do surrounding the project. The individual success they've had in their respective careers gave the duo creative freedom with Tuxedo. They weren't concerned with following any trends and just made music they felt at their own pace. "It's like summer camp," says Jake One. "We are just having fun doing things. Literally, some of the stuff we did that didn't turn out good was still entertaining."

It's an album where you can just shut your brain off for a little while and let your body lose control to the beats, or just close your eyes and sail away to the sea of funk. "It's a party record," describes Mayer Hawthorne. "That was the entire goal. A lot of my solo records are more introspective and they deal with deeper topics. For me, this was kind of an escape. I consciously wanted to make a record that was strictly about dancing and that was it."

All nostalgia aside, music based of the whole old school boogie sound is always in danger of becoming corny to a certain extent. As the guys of Tuxedo explain, "there's a fine line between keeping it G and Kenny G, and you just don't want to go to Kenny G." There's those times when that idea for a saxophone solo, that certain chord change, or just the way a certain note is played can push it over that line, and then it's time to dial it back a bit. While the two did fess up that they might have crossed that line a few times during the Tuxedo sessions, the final product does come out wonderfully G'd out.

Along with the massive Nate Dogg influence, Tuxedo embodies the spirit of musicians such as Leroy Burgess, Bernard Wright, Al Hudson, and Don Blackman, to name a few, and the duo enlisted famed engineer/producer John Morales to mix the record and really bring it to life. The duo was impressed by the records that Morales reworked for his series The M&M Mixes where he would take old dance songs and make them sound really big. "A lot of time, you go and play some of the original records and they are not hitting like modern records," explains Mayer Hawthorne. "We wanted the feeling of those old 80s records but we wanted to make sure it still competed with the modern stuff in the club."

Mayer Hawthorne and Jake One are already working on songs for another Tuxedo, while doing spot DJ gigs together. Tuxedo isn't a novelty nor a niche project, but more of a genuine reincarnation of a true dynamic of funk music's past given some fresh air. Whether you can dance or not, if Tuxedo doesn't even give you the urge to get up and boogie, even in the most inopportune of places, then you are not truly living.

The self titled Tuxedo project is out now via Stones Throw Records. For more information, visit stonesthrow.com/tuxedo.