In award-winning short fiction writer Elizabeth Harris's novel Mayhem: Three Lives of a Woman, Harris masterfully explores the way that a momentary concession can irrevocably and completely change the course of a life.

This story of violence between neighbors and one woman's subsequent fall from grace has its origins in Harris's childhood curiosity about women who worked as home nurses at the bedsides of elderly relatives. In Mayhem, Harris's authorial narrator recounts a childhood visit to a great auntie cared for by a woman who seemed a strange combination of friend, relation and nurse. "From visits elsewhere over the years, I inferred a category of able-bodied white women who 'lived in' and took care of invalid old people... Stories of wrong clung to these women, someone else's or their own." The narrator senses that "these women" living humble lives of service had arrived at an end of the road of sorts, cast out from both family and a sense of place. Mayhem -- which won the Gival Press Novel Award -- is the deft, deeply imagined, deeply literary tale of one of these women. 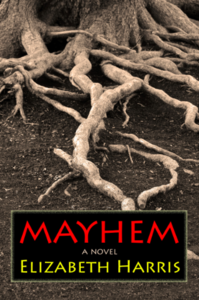 Set in early 20th century rural central Texas, Mayhem tells the story of Evelyn Kunkle, a girl raised in a community of German-American farmers. At 17, Evelyn marries Les Gant, the son of a neighboring family, in a "confident, reasonable, and widely approved union designed for devastation." From the opening of the novel, when the reader sees an adult Evelyn on the steps of the courthouse where her husband is to be tried for castrating a neighbor, it's clear that Evelyn's story will be a dark one. "In fact, she is only a witness and, being the wife of one of the defendants, a limited witness, but she is the trial's most intriguing spectacle, the origin of the crime, the modest, obedient, well regarded woman taken in adultery."

Harris uses the language of early 20th century farmers, as well as her own knowledge of the natural world of Central Texas, to create a wholly immersive, complex and layered historical novel. Mayhem captures the quirks and intricacies of rural culture. Harris does with Central Texas what Faulkner did with Mississippi, or Annie Proulx has done with Wyoming. The novel cracks open a mystifying, violent, hard world and allows the reader to wander through, to admire its beauty and shudder at its injustices.

Sex lies at the root of the story. It is Evelyn's adultery with a neighbor that results in her being banished from life as she knows it, that ultimately lands her in that lonely role of caretaker of the elderly that Harris pondered as a child. But the smaller and more poignant aspect of the tragedy -- and perhaps the true tragedy of the novel -- is that while sex is a taboo and driving force in the characters' lives, it's one that goes unenjoyed by Evelyn herself. She sees sex as something "male animals live for and women were stuck trying to regulate." And while her husband would like to please her, he honestly doesn't know how. "Lying there alone, he wondered whether she enjoyed their copulation; he could not ask her." As Evelyn navigates the constraints placed on women, it's her necessary obedience to her husband that results in a brief lapse in judgment that causes her to lose everything. The lack of understanding between husband and wife is both perfectly executed by Harris and maddening to the reader, as is the fact that Evelyn is cast out because of sex, which she cares so little about and in some ways knows not at all.

Mayhem is a powerful masterwork. It's the quality of Harris's language, as well as her ability to viscerally summon a lost time and culture, that place her in the ranks of writers like Cormac McCarthy and Marilynne Robinson. And the novel is not without hope. Though upright, proper Evelyn can never reclaim even a scrap of the life she has lost, she undergoes her own quiet recovery; she illustrates that acceptance can be its own form of redemption.