Last Tuesday, New York City CEO (and acting mayor) Michael Bloomberg eloquently defended a proposal to build a mosque and community center near the World Trade Center site. In his speech, Bloomberg compared Muslim efforts to construct a house of worship with the plight of other historic groups to build their own New York City shrines. Among these hallowed institutions: churches, synagogues, and, presumably, myriad variations of "Ray's Famous Pizza". 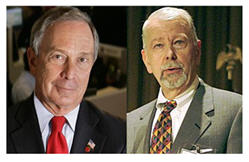 One day later, in California, U.S. District Chief Judge Vaughn R. Walker wrote a 136-page dissertation on the rights of another castigated group of Americans -- gay and lesbian couples who wish to do just once what Larry King has already done eight times: get married.

Wherever you fall on these issues, it was a good week for reasoned thought; both Bloomberg and Walker selected their words and arguments precisely and carefully. That's why those same words and arguments required such an avalanche of re-interpretation -- and refudiation -- in the mainstream media, where the sacrosanct rights of reductionist pundits are never, ever subject to abrogation.

Joel Schwartzberg is a nationally-published personal essayist and humorist, and author of the award-winning essay collection, "The 40-Year-Old Version"