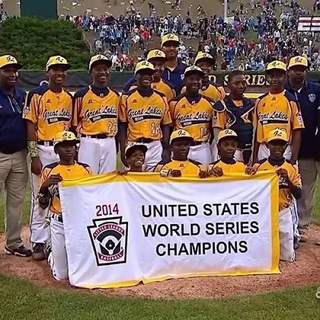 Like Chicagoans across the city, Rahm Emanuel loves the plucky and gritty youngsters from the Jackie Robinson West Little League team.

He tweeted repeatedly about them.

The city hosted a watch party on the Far South Side, during which he and the hundreds of others there hung on every pitch.

And today (Wednesday), he's giving them a parade to celebrate their historic game that ended with their being America's champions.

In a statement about the parade, Emanuel said the following:

The excitement surrounding these remarkable young people has been palpable in every neighborhood of Chicago, and their spirit, positive attitude and success on the field illustrate why they are the pride of the City. Win or lose, these 13 boys are their coaches are the true champions of Chicago and we look forward to welcoming them home with the fanfare they deserve on Wednesday.

During their run, commentators across the country noted that the team, which is composed entirely of African-American players, hails from the city's South and Southwest Sides.

Many of these neighborhoods have not received the same love from Emanuel that he has heaped on the young players, whose heart, skill and tenacity he has rightly praised.

I pulled seven years' worth of homicide data compiled meticulously by friend and former colleague Tracy Swartz of RedEye to see how it and the city's other communities had fared during Emanuel's 39 months as mayor as compared with the same amount of time during his predecessor Richard M. Daley's tenure.

Not so well, as it turned out.

The neighborhood has had 79 murders under Emanuel, as compared with 58 during Daley's final 39 months.

That's the second-highest total in the city, and a 36-percent increase under our current leader.

In Washington Heights, murders have gone up from 21 under to Daley to 25 under Emanuel, a 16-percent jump.

By contrast, the total number of murders throughout Chicago was nearly identical under Emanuel and Daley.

That means that those neighborhoods have fared worse under the JRW-loving Emanuel than under Chicago's longest-serving mayor.

After the parade, the young players from the team, like young people throughout the city, will need to go back to school.

Of course, there are fewer of them in their communities.

That's because the mayor closed 49 schools in 2012 in the largest schools closing in American history. Some of the zip codes where the youngsters live were among the hardest hit by both the actual shuttering of the school and the buildup to that final decision.

The latter is an important point.

I was working for Hoy Chicago in the spring of 2012, the time when the school board, which serves under Emanuel, was deciding the schools' fates.

I visited parents from the William Penn Elementary School in the North Lawndale neighborhood.

The strain of the potential closure on the parents, educators and students was evident. In the end, Penn was spared, but the emotional toll it had taken was real.

In a couple of years, when they are old enough, the players from Jackie Robinson West can apply to go to high school at the Barack Obama College Preparatory High School.

The school is likely to be named after our 44th president, who has deep ties to the city's South Side.

Of course, if they are able to gain admission, something that's happened less and less for black and Latino students during Emanuel's tenure, they will have to travel to the North Side.

That's because Emanuel has proposed that the new school be located near the area left vacant since the Cabrini-Green housing development was closed during Daley's time as mayor.

Actions like these and others have caused many in the very neighborhoods that helped propel Emanuel to victory in 2011 to question how much he cares about them and their communities.

I asked Emanuel about this last year during a 10-minute interview he granted Hoy Chicago.

As you can see, he responded by laughing and by talking about his actions during the teachers' strike that shot Chicago Teachers Union head Karen Lewis to national prominence.

Others are not so sure.

Chicago Tribune columnist John Kass wrote recently about the "anyone but Rahm" vibe that is building in Chicago, and Lewis has all but declared her intention to take on the incumbent.

If it materializes, the contest will be an interesting one.

Lewis and Emanuel's distaste for each other, at least in the past, has been well-chronicled.

The mayor once swore at Lewis, while she has called him a liar and a bully.

Also interesting to watch will be whether Emanuel treats his potential opponent the same way during his reelection campaign as he has treated many of the neighborhoods that have produced the young baseball players who stole the nation's heart and whom the mayor so openly admires.