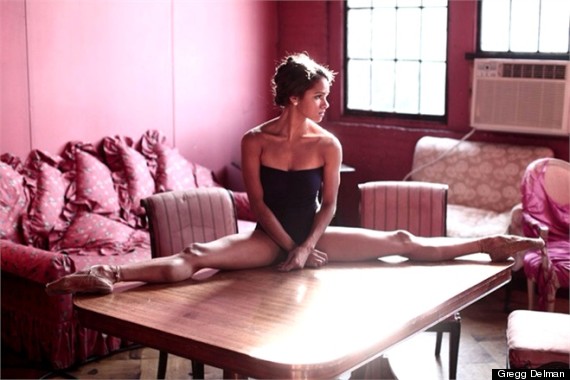 One of the quandaries of being a black ballerina is that people never stop talking about it. Every single article is peppered with references to the rarity of your position, the novelty of being a black woman pirouetting alongside a bevy of white swans. And speaking of swans, let's wade a bit further. In response to your dream of dancing principal roles like "Odette" in Swan Lake, some brilliant, observant soul reveals the audacity of your hope -- saying to you, Misty Copeland of the American Ballet Theatre, that your physical features don't quite echo that of the lead character. Reminding you, in case you've forgotten, that "Odette" is in fact, the white swan. Misty Copeland's skin color, this wondrous, yet inconvenient truth, glides along the backdrop of the classical ballet, defying the attempt to construct another narrative. Because in 2013, there are still too many firsts.

When Misty Copeland joined the legendary American Ballet Theatre (ABT), she was the only African-American female dancer in the company; and for the next eleven years, it would remain that way. And although she'd make history in 2007 by becoming the first African-American female soloist in two decades, and only the third in the company's 76 year history -- neither Misty, nor any other black female dancer to date has ever been promoted to principal ballerina in the major American companies, the American Ballet Theatre and the New York City Ballet. The disparity is remarkable; and some black ballerinas resort to dancing abroad where things are more equitable. It's a fascinating conundrum for a 21st century America.

In this interview, Misty Copeland opens up about her love affair with the ballet, and the heartbreak that has come along with it. Her story is a classic American tale about both the dreams, and the dreams deferred. It's an incredible tale of God-given talent, but a talent that very well may have remained dormant, left undiscovered by both Misty and by the world, had it been based solely on her family's socio-economics, access and pedigree. Misty talks about the twist of fate that would usher her, a thirteen-year old girl from a Southern California inner city, into one of the most exclusive, expensive, inaccessible professions by way of a basketball court where she was taking free dance lessons.

What often feels like a Cinderella story, complete with magnificence and splendor, is coupled with an optimism that's grown cautious over time -- having to come to terms with the reality that uncontrollable variables may stand in the way of Misty realizing the full extent of her dream. If Copeland never reaches the pinnacle of a ballerina's career, by taking a bow on stage as a principal dancer -- she'll always be forced to wonder two things. Was it her talent that prevented her from going further? Or was it the simple fact that history had repeated itself, determining once again, that there was still no room for a black swan?

Below are excerpts from my conversation with the incomparable, Misty Copeland, who is currently filming a feature documentary on her life entitled, A Ballerina's Tale.

You've spoken about the daily struggles your family faced as you were growing up. I think growing up lacking financial resources can have two different outcomes. For some children, it forces them to dream of something more, and in some cases, poverty can suffocate a child's freedom to dream. Were you a dreamer?

I think as a child there weren't dreams. I can't recall as a child having some ultimate dream and thinking that it was possible. And when I started taking ballet classes, I don't think I really understood what I was committing to because I loved it, and I had never found anything that I loved doing, so I just said "yes." I didn't want to stop. It was an escape from my every day life, and struggling with my mother financially. And then once I started ballet and I saw my first performance with American Ballet Theatre (ABT), that was when I started to dream. I think those were the first times I really started to envision a different life.

For most young girls, ballet is presented to them as a hobby. At what point did you realize that ballet could become a career?

It didn't start as a hobby. I was found and brought in because they could see the talent. It was presented to me as a career from the very beginning. My first ballet classes were at the Boys and Girls Club, on a basketball court. And I was discovered there. So it wasn't like I just wandered into ballet class and was just taking them once a week. When I made the commitment to start attending this ballet school and to accept the full scholarship, I was aware. And Cynthia Bradley, my first teacher, made it clear that this is a career option, and if you're willing to make the commitment, you have four years for me to train you and get you ready to become a professional. And the goal was always to come to New York.

Read the rest of this compelling interview with Misty Copeland on VOGUE ITALIA by clicking HERE!