Sarah Palin's much-discussed book, "Going Rogue," hasn't even been officially released yet and already its accuracy is in question.

The Huffington Post has obtained internal McCain campaign emails -- addressed to and by the former vice presidential candidate -- that directly contradict or cast serious doubt on several of Palin's assertions. The emails were passed along by a mid-level staffer who called early excerpts of "Going Rogue", a serious mixing of truth and imagination."

In one email thread, dated October 14, 2008, Palin says she is "not thrilled" with the idea of going on Saturday Night Live as a way of marginalizing the show's unflattering impersonations of her.

"Not after seeing clips of what they've been playing re: my family," Palin writes to campaign manager Steve Schmidt, as well as top strategists Rick Davis; and Nicolle Wallace. "I had no idea how gross 'celebrities' on that show and in other celebrity venues could get when it comes to family and other aspects of my life that have nothing to do with seeking the vp slot. These folks are whack - didn't know it was as bad as it is... what's the upside in giving them any celebrity venue a ratings boost? That's Todd's input also," she concludes, in reference to her husband.

Schmidt would respond minutes later, telling Palin that, "if you don't want to do it you should not," while adding that a guest appearance would "get an enormous amount of" attention and help her "to fly above all this."

"The american people will see someone who can laugh at themselves which has alwauys [sic] been a trait they admire," he adds. 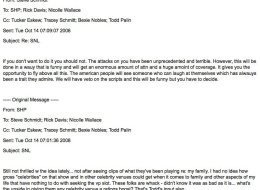 Palin would ultimately make a guest appearance on Saturday Night Live days later. But in her upcoming book she describes the deliberations about whether or not to go on the show much differently than the emails suggest. In "Going Rogue", the vice presidential candidate writes that "from the beginning, I liked the idea that John and I might appear on the show."

Of course, the idea was met with massive back-and-forth haggling. Had we done it back in September, I think we might have had a shot at evening the odds with the SNL crew. As it stood, though, Tina's impression of me became so omnipresent--and so unchallenged--that some people blurred SNL/skit dialogue with what I had actually said."

The SNL episode isn't the only instance where "Going Rogue" seems to venture away from documented campaign material. On the condition that it could be quoted but not re-published, the McCain staffer also provided the email that Schmidt sent to Palin and her staff after she was prank called by someone pretending to be French President Nicolas Sarkozy

"Who set this up? Are you kidding me? Did it occur to anyone that the french president wouldn't be looking to have a conversation with the vicepresidential candidate 3 days before the election," Schmidt writes. "From this moment forward, no interview occurs without my direct signoff. Nothing. I want to know the exact details of this. I want to know who is responsible."

In "Going Rogue", the anecdote is painted in a drastically different setting and context. For starters, Palin writes that Schmidt called her, something that two McCain aides (including the one who provided the email) insist never happened. "He never called screaming at her," said one of the aides, who was traveling with Palin at the time. "There was no phone call."

Moreover, in Going Rogue, Palin recalls Schmidt screaming directly at her, so much so that it "blew my hair back." In actuality, the irritation was directed at the staffers, the aide said. "He was expressing his anger to staff. And did it over email."

Finally, the McCain aide sends over a third email that shows a late-in-the-campaign Palin grateful for the work done by Schmidt and others and cognizant of her "blundered-up" media appearances. The occasion was a sit-down interview that the vice presidential candidate had done with ABC's Elizabeth Vargas on October 29, in which it was reported (widely out of context) that Palin was already thinking about running for president in 2012.

"I am very sorry," Palin writes to Nicolle Wallace, Steve Schmidt, and Rick Davis, with her husband, Todd, cc:ed. "u guys are working double-triple time on this blundered-up stuff that they spin bc of my visits w press - while I apologize I say I love you guys!!!" 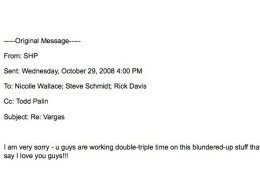 All told, the three emails provided to the Huffington Post are the clearest contradictions yet of the account of the campaign that Palin painted in her book. Far from being eager to go on SNL, Palin - according to the emails - showed trepidation. Meanwhile, Schmidt, in the aftermath of the Sarkozy gaffe, doesn't direct his anger to Palin over the phone. But rather, according to two aides, at staffers via email. And while Palin goes to great lengths in "Going Rogue" to paint the McCain campaign manager as tempermental and constantly opposed to allowing her to play a bigger role on the trail; just days before the election she was expressing her "love" for the help he had done covering up her blunders.

Reflecting on it all, the campaign aide who provided the emails said the following of the book: "There are elements of truth underlying a narrative that is completely false."