The McCain campaign has a new web ad out placing Barack Obama, for the second time, side-by-side with a foreign dictator. This time, it's Fidel Castro.

A Democrat in south Florida alerted the Huffington Post to the image, which shows Obama and Castro, profiled side-by-side, above a quote from the Cuban leader praising the Illinois Democrat as "the most advanced candidate."

Picture association is a time-honored tool in political campaigns (think: former Georgia Sen. Max Cleland having his mug pasted beside Osama Bin Laden's during the 2002 congressional elections). And indeed, this is not the first time that the presumptive Republican nominee has used the tactic. Early in June, McCain's campaign launched a web ad placing Obama beside Iranian President Mahmoud Ahmadinejad underneath the caption: "Is it OK to unconditionally meet with anti-American foreign leaders?" 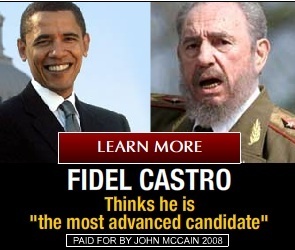 Unlike that spot, the Castro advertisement actually uses the foreign leader's words against Obama. But the quote is misleading in regards to the actual political dynamics in play. For starters, since Obama became the de facto nominee, Castro has been critical of his candidacy, arguing that he has not called for serious alterations to U.S.-Cuban relations and would willingly allow the island nation to suffer from hunger. Obama, meanwhile, has criticized Castro as a repeated abuser of human rights and a tyrant whose time has passed.

Moreover, the guilt by endorser meme is something that even McCain has disavowed. When questions started being raised about his supporter, John Hagee, the Senator washed his hands of the pastor's controversial statements. "When he endorses me," McCain said, months before he rejected Hagee's endorsement, "it does not mean that I embrace everything that he stands for and believes."

For now, it seems the McCain camp is using its Castro ad on sites catering to South Florida - obviously a politically important geographic region. An email to McCain staffers went unanswered, but if readers have any more information, please send us tips.