It took less than 12 hours from the time the media caught wind of Cindy McCain's recipe theft for John McCain's campaign website to scrub away the offending pages (screen-captured below). That's 12 hours more than it took Cindy to come up with the recipes... (In the meantime, you can still see the listing of recipes as it originally appeared on the campaign website through the Google cache.)

It also turns out that Mrs. McCain submitted "her" Passion Fruit Mousse recipe to the New York Sun for an article that ran on January 16th. Just like on the McCain campaign site, there is no sourcing other than McCain herself...

CNN (and TMZ) are now reporting that Recipegate was the work of an intern, and that according to McCain's campaign, the whole thing is a "low-level unpaid staff debacle."

Personally, I'm not sure how an intern can be responsible for messing up the McCain "family" recipes. Did the intern lose Cindy's recipe box only to haphazardly try to replace them with Food Network recipes? If only we could all steal and lie and lay it off on the unpaid help.

What will they call it? Farfallegate? The Rosemary Chicken Dome Scandal? Perhaps something with the ubiquitous Rachael Ray in it.

It seems that Cindy McCain, John McCain's perfect, blonde beer-baroness wife is about to find herself painted as the latest example of plagiarism on the campaign trail.

This past Sunday, Lauren Handel, an eagle-eyed attorney from New York, was searching for a specific recipe from Giada DeLaurentis, a chef on the Food Network. Yet whenever she Googled the different ingredients in the recipe, the oddest thing happened: not only did the Food Network's site come up, as expected, but so did John McCain's campaign site.

At least three of the "McCain Family Recipes" (below) appear to be lifted directly from the Food Network, while at least one is a Rachael Ray recipe with minor changes.

See for yourself... and Bon Appetit (click on each image to enlarge): 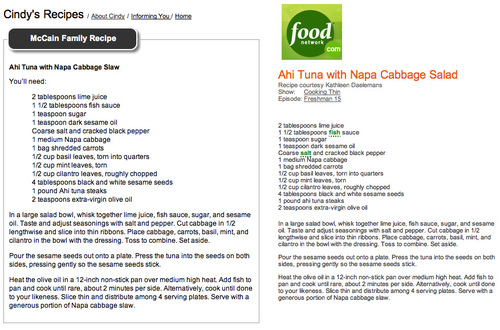 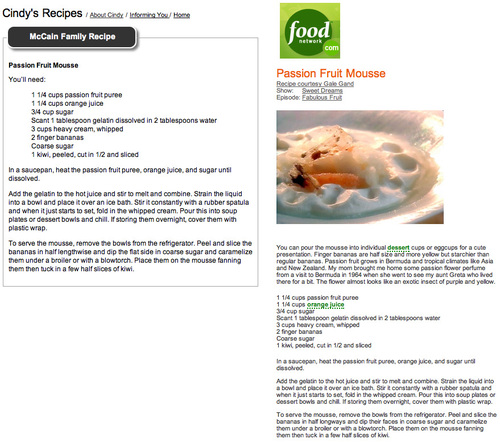 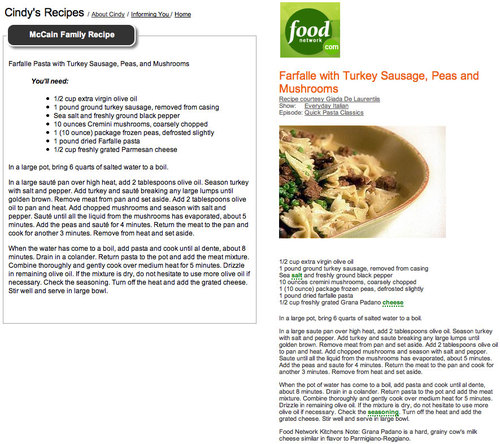