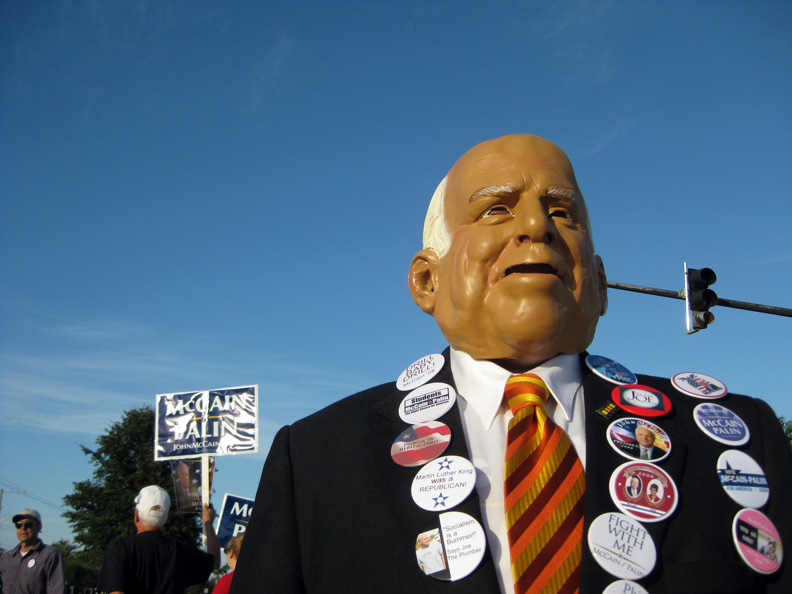 As 20,000 Obama supporters streamed into the BankAtlantic center to see Obama's aptly titled Sunrise Rally, a small but valiant detachment of McCain volunteers stood their ground. We were in Sunrise, Florida, on the edge of the swamp, deep in Broward County, the largest concentration of Democratic voters in the state. People had been lining up to see Obama since 6am. As the cars rolled past all day and the lines swelled, there they were, a dozen McCain supporters, perched on the median, hoping to stem the tide.

"Do you see our plane?" the head volunteer said, pointing.

"No communism!" they yelled at passersby.

Exciting: my first glimpse of real, live rank and file McCainiacs. They were all nice to me, but vehement in their utter loathing of the press and anyone dumb enough not to realize that Obama represented some kind of creeping putsch from the past. My notepad attracted a lot of attention, as everyone took turns trying to convince me, the liberal elite media, how deranged the liberal elite media are. "They have such a distorted view!" Then it was on to a nuanced discussion of the issues, like: "MAN, I TELL YOU OBAMA IS SOCIALISM!"

I had been wondering where the socialism argument might be catching on, and the answer is in south Florida. At last half of this crowd were Cubans, older Cubans, people who had lived in Cuba, or at least felt like they did through the vicarious transmission of fierce anti-Castro Cuban sentiment from friends, family, and the non liberal elite Cuban media.

Elaine said she had two reasons to vote against Obama, as she was Cuban and Jewish. "I'm a Jewban! And Obama is going to let Israel disappear."

I didn't bother pointing out that despite the best efforts of the right wing to scare Jewish Floridians like my family in Century Village (West Palm), eighty percent of Jews here are voting for Obama. Elaine wore a red sweater with three buttons, one of which said: DEMOCRATS 4 McCAIN.

"No. I'm just wearing this. The office gave it to me."

The next button announced that: MARTIN LUTHER KING WAS A REPUBLICAN.

"Are you sure about that?" I asked.

"I think that's not correct."

Two of Elaine's three pieces of flair were falsehoods pinned to her by the McCain campaign. Sound familiar? Then came Al, the organizer of this outing, who told me how Obama has been "groomed for this since college." Where do you think his money is coming from, after all? "All these foreigners controlling him," he said. "And he's not even American." Al and I never arrived at the destination of his particular brand of illumanti theory, because Al couldn't pry himself away long enough from the passing cars, at which he liked to yell: "Use your brain, vote McCain!"

"You see how rude they are?" He asked me. "They flip you off, they yell, they don't know nothing. These people are so stupid. And they're voting, you know?"

Yes, that's right, he affirms, especially not these stupid Obama people. Then he turned to a car to yell, "GO BACK TO RUSSIA!"

Behind me, a guy named Seth looked like a theme park McCain: black suit, rubber mask, waving indiscriminately with a fixed smile. In homage to his candidate, Seth even mimicked the stiff arms and double thumbs up. But every so often the mask had to come off.

"This thing gets really sweaty," he said, holding the slightly disturbing rubber shell of McCain's face in his hand.

"Where'd you find that thing?"

"It's a pretty good likeness."

"I'm going use it for Halloween too."

"Yeah. And my wife will be Sarah Palin."