A maverick no more?

Senator John McCain skipped out on a vote this afternoon on a bill that creates a path to legal residency for college students who entered the United States illegally with their parents. While McCain has decided to miss many votes in order to stay on the campaign trail, the move was notable this time because it came on the same day when he made a point of announcing that he was canceling campaign events to confirm the nomination of a controversial federal judge. The Senator has also co-sponsored the bill during earlier congresses. 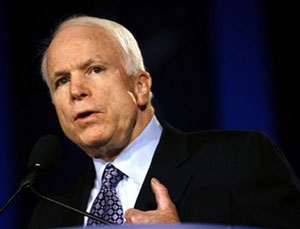 The Arizona Senator spent years cultivating his reputation as a "maverick" Congress member who spoke only in the American dialect of English called "straight talk." He probably cost himself the 2000 Republican nomination for President by sticking to his guns on social issues and other matters. And this time around, McCain has come in for massive criticism from his party's conservative base for promoting a compromise immigration reform bill that conservatives slammed as granting "amnesty" to all illegal workers.

The DREAM Act allows high school graduates who have lived in America for at least five years and attended two years of college (or agree to two years of military service) to enter a path to becoming legal residents in the United States. A filibuster of the bill was sustained on Wednesday by a vote of 52-44.

In 2005, McCain joined 27 other Senators in co-sponsoring the legislation. Sitting out the vote this time might suggest that McCain no longer feels he can brave the anti-immigrant currents swirling in his party if he wants to keep his troubled presidential campaign afloat.

McCain's campaign offered no explanation for why he sat out the vote.

"Sen. McCain had to catch a flight to Iowa right after the Southwick vote," the spokesman said in an e-mail to the Huffington Post. "I'm sure he'll address the issue in more detail in Iowa."

McCain's campaign announced yesterday that he was skipping "his New Hampshire events scheduled for tomorrow, October 24th, to return to Washington to vote on the nomination of Judge Leslie Southwick to the U.S. Court of Appeals for the 5th Circuit."

Southwick's nomination has prompted controversy due to allegations of racism and homophobia. The former Mississippi judge reinstated a state employee who was fired for calling a co-worker a "good ole nigger," and awarded sole custody of a child to a father because her mother was a lesbian.

McCain dismissed these concerns as a "smear campaign," and added, "Liberals, including the Democratic presidential candidates, are opposing Judge Southwick because they know he will strictly interpret the law rather than make it from the bench."

On the other side of the aisle, Democratic critics accused McCain of abandoning his principles to skip the vote on the DREAM Act.

"Missing the vote on the DREAM Act is consistent with McCain's chase for conservative votes if not with his principles," said Luis Miranda, Democratic National Committee spokesman. "Once again he's avoiding taking a stand on what was previously a signature issue."