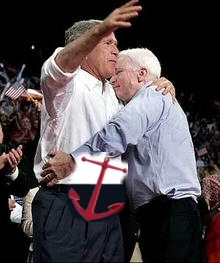 The time has come for John McCain to be what George W. Bush said he was: "The Decider."

(In fact, of course, Mr. Bush has instead been the Divider.)

It's over. Polls make it clear that Mr. McCain is going to lose. Indeed, this election is shaping up as the biggest Democratic sweep since 1964.

The Pew Research Center Poll announced today has Barack Obama ahead by a staggering 14 points, 52% to 38%. The NBC-Wall Street Journal Poll today also has Obama at 52% with a double-digit lead, 52% to 42%.

Here is what McCain the Decider must decide: Should I continue to be a divider or return to being a patriot by becoming a unifier?

The time has come, Mr. McCain: Call the dogs off. Denounce the outrageous statements by Rep. Michele Bachmann (R, MN), Rep. Robin Hayes (R, NC), Sen. Mel Martinez (R, FL). They are not going to win you the election. All they will do is increase hatred and bitterness and harm our nation.

Stop all the dangerous, divisive bulls**t about "terrorists," "socialism," Un-Americans," "communism," and the rest.

Stop sh**ing on your opponent, get off the pot, preserve what's left of your reputation for decency and patriotism, and help to prevent further unnecessary and pernicious division of your country.

If you really believe in "Country First," Mr. McCain, stop putting Country Last and do all you and your supporters can to stop the venom that will only make it more difficult for President Obama to lead the United States forward.

The only positive thing that is still within your reach is not victory in the election; it is salvaging your honor and helping your country.

Do it. Now. COUNTRY FIRST.