Americans now pay less in taxes than at any time since WWII. The low tax rate, in effect for eight years now, has not produced anything resembling general prosperity.

Republican economic policy holds that lower taxes will increase government revenues by stimulating economic growth. That has never happened, and we have tried it twice now, with Reagan and Bush 43. The result has been increasing national debt.

The income tax was enacted under the authority of the 16th Amendment in 1913. The progressive rate tax, a system under which higher incomes are taxed at a higher rate, was always a part of the system. Prior to the Great Depression the top rate was 25%. It was raised during the Depression and for the war years and after to the vicinity of 70% - 90%. Over the years the top rate has been as high as 70%-91% for more time than it has been low 25%-39%.

In 1981 Reagan raised the bottom rate from 10% to 15% while lowering the top bracket from 70% to 50%. The top rate was lowered again in 1986 to 28%. The result was a huge run up in the national debt because the theoretical economic growth that would have generated increasing revenues didn't happen.

Bush 41 raised the top tax rate to 35%, the famous "read my lips" tax increase. Clinton managed to balance the budget mostly by raising the top bracket to 39% from 35%. Bush 43 reinstituted the 10% bracket and reduced the top rate to its current rate of 35% from 39%. The result, deficit spending and a burgeoning national debt. The growth it was supposed to generate did not happen.

Nearly all of the legislation passed to lower taxes had titles similar to Economic Recovery Tax Act. In the chart below though, you can see that all of that tax lowering has had no consistent effect on the Gross Domestic Product. The one period, circa 1982, that it does seem to show an effect must be put in the context of hyperinflation. The median tax rate spiked because salaries were indexed to inflation, growing, and taxes were not indexed, adjustments were made. Higher median taxes can't be meaningfully interpreted as a cause for the GDP downturn separate from oil shocks and hyperinflation. 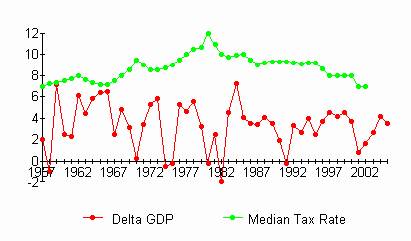 In addition to an increase in national debt, Americans, 80% or so, are so strapped due to declining incomes that the prospect of a tax increase is a serious issue. So retiring the national debt or even balancing the budget seems out of reach without draconian cuts in government services. And making those cuts will not improve the economy. Any substantial curtailments in government programs will only make life harder for a majority of Americans.

Who's debt is it?

When you put a purchase on your credit card and pay over time you end up paying more for the item in the end. Deficit spending then increases the cost of government and is therefore an indirect tax increase. So deficit spending is a tax increase whether you chose to call it that or not.

What is not clear to many is why taxes do not hurt the economy. It seems intuitive enough that they would, but in historical ranges they do not appear to have done so.

The simplest explanation is that when you pay taxes you are buying something, the services of the government, and in order for them to perform those services they, in turn, buy goods and labor from the same market as do you. So taxes are, ideally, immediately recycled into the economy, no different than if you bought the same services from a private company. The only difference then is that buying from the government is compulsory. That fact is what the argument is really all about. The idea that taxation harms the economy has always been baseless and simply a cover for disputing the existence of specific government programs.

So if taxes are economically neutral and deficit spending is just another way of raising taxes then why worry? One problem is that we are increasingly borrowing from foreign sources and when we are paying interest on our debt that money is removed from our economy. The other is the little examined reality that concentrations of wealth effectively remove money from the economy too. Instead of being in circulation, in the form of direct business investment or funding consumer spending, wealth is increasingly chasing into speculative bubbles in stocks, commodities and foreign currency or foreign banks for sheltering. This damages the economy, reducing revenues, leading to more deficit spending.

Both McCain and Obama will have to raise taxes to pay for programs for which the public is clamoring, whether those programs are universal health insurance, expanding the military, trying to retire the national debt, or simply trying to balance the budget.

McCain proposes to increase your tax exemption for children by something like $125/year. That's it, if you have children you get something, otherwise not. This will increase the deficit.

McCain proposes a $2500-$5000 "refundable" tax credit for the purchase of health insurance while apparently proposing, as I understand it, eliminating the deduction for employer provided health insurance. This is a tax increase for business to pay for a tax benefit to the public. This is, ostensibly deficit neutral.

McCain will cut the corporate tax rate from 35% to 25%. This is proposed to keep American companies on shore and to stimulate the economy. This will not keep companies on shore because the 10% tax savings on profits is miniscule compared to the as much as 80% operating cost savings of exploitation of cheap foreign labor. And since most corporations do not pay any taxes due to loopholes it is ridiculous. All that will happen is that those that are paying taxes domestically will pay less and increase the deficit.

All of this tinkering with tax cuts will result in a net tax increase because a higher percentage of the operation of government will be placed on your credit card.

Obama's plan, a tax cut for the middle class, should be offset by rolling back the Bush 43 tax cuts for the wealthy. Curtailing tax loopholes for companies operating offshore will have far reaching effects including reducing the deficit. As far as funding for new programs goes, there is little doubt that these, like universal healthcare or improving public education and tuition programs, will go on your nation's credit card.

What's in it for me? After all, I'm paying for it.

Your taxes are going to go up with either Obama or McCain. For whom you vote, if that is your issue, depends entirely on how much they will go up and/or what you will get in return.

McCain's plan resolves to further increasing the deficit and putting more on the credit card without any material increase in services from the government. Essentially making government more expensive without any increase in benefit.

Obama's plan balances a modest tax break for the middle class with a upper income tax increase. Our government "credit card" debt will not increase if we do not adopt any sweeping new social programs. Current operations of government will then not be increasing in expense because we are not increasing the financing of them.

Obama's plan to close tax loopholes for companies operating offshore is probably the most important initiative of this era. It would recapture revenues and decrease the deficit, possibly even funding new programs. We shall see.

What is in it for you is this. For thirty years the U.S. government has been pulling the wrong lever in an effort to aid economic growth. Taxes do not make any difference unless and until they are too low to meet expenditures or so high that cash is languishing in government coffers. Debt interest, because it increasingly is paid to foreign holders of our debt, is lost to our economy. So in this global financial climate, taxes are economically neutral if they meet current expenses and economically damaging if they do not.

So what is the right lever to pull?

Raise the top tax rate to more historic norms. Plain and simple, excessive concentrations of wealth tend to remove money from the economy, like interest on foreign debt. We have seen commodity markets being skewed by over speculation and big money chasing the safe/high return investment du jour. Artificially inflated markets do no one any good as the underlying demand will not support unrealistic prices. The money invested in these bubbles will be lost as surely as there is gravity. This is the ultimate tragedy of the "trickle down" philosophy, money that could have put more kids through college or could have funded national healthcare is just going to be lost in a series of speculative bubbles.

Increasing access to higher education and increasing quality in public education are the right levers. A universal healthcare system that would cost the public and industry half of its current burden is the right lever. And if the cost of these programs is put on the credit card then there is some credibility to the argument that the increased cost of financing will have been worth it to the American people. Lowering tax receipts in the face of widening deficits is actually worse than doing nothing.

Finally, getting Americans a raise will help. That is really the only thing that will boost the economy. If Obama thinks doing so by raising taxes on the wealthy to give it to the less fortunate is the only politically acceptable way to do that, then fine, do it. America works just fine when the rich are more heavily taxed. The problem then becomes inducing the rich not to flee.