As I head into the last week of my grassroots campaign to win the Arizona U.S. Senate Democratic nomination to face John McCain in November, I'd like to share a series of excellent political cartoons that my campaign featured in advertising over the last few months.

The cartoons are the work of the fine eye of Tempe, Arizona-based freelance cartoonist Tom Robertson.

We lead off the political cartoon campaign with McCain pictured as an oily pelican in the embrace of a Big Oil tycoon. This ad ran as the BP oil leak was still spewing out of control in the Gulf of Mexico. 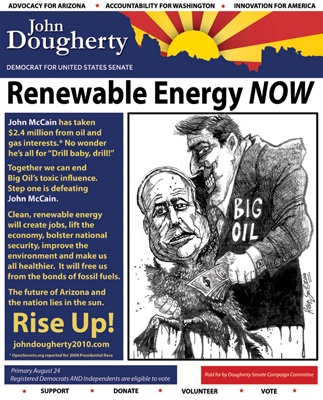 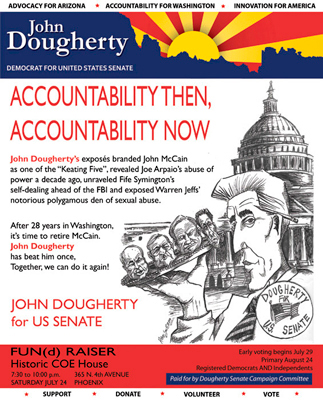 Robertson next captured McCain's meandering on the issues with an incisive sketch of
Arizona's senior senator wearing "casual" footwear. 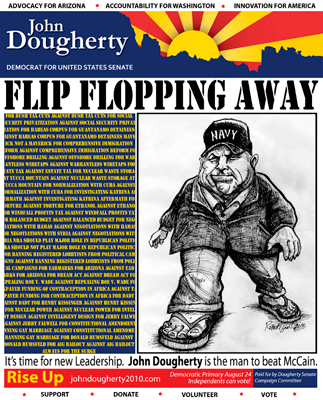 And to close our primary campaign, Robertson featured a simple comparison between a Wall Street enraptured McCain and my embrace of Main Street Americans. 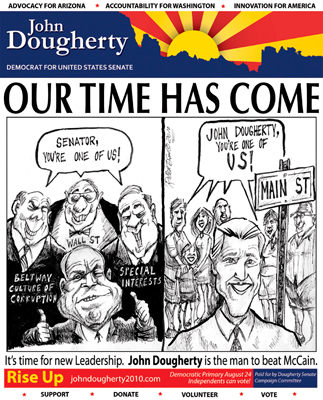 I'm finishing up my campaign this week with a 40-mile walk across the heart of Phoenix to reach thousands of voters before Tuesday's primary. Follow my "Bringing on the Heat" trek through the Valley of the Sun from my website at johndougherty2010.com.

"If you can't take the desert's searing heat in August, you don't belong in the United States Senate!"