Wading into the debate over the future of the war in Afghanistan, Alaska Governor Sarah Palin tried for a moment to sound as if she knew what she was talking about. This is what we got:

Setting aside for a minute the fact that the substance of Palin's babbling, incoherent response was wrong, she apparently got her centuries and wars crossed.

For those who don't know, this is General McClellan: 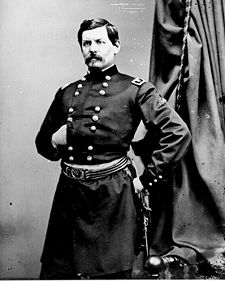 And this is General McKiernan, the officer to whom I presume Palin was actually referring: 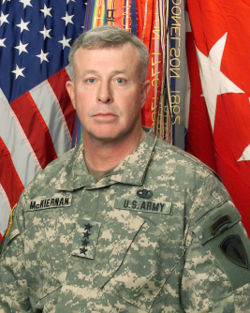 Now, in most cases, this type of oversight on the part of a politician could be dismissed--maybe even attributed to nerves. But when Afghanistan is exploding and on the verge of failure, details matter. Facts matter. Being familiar with the situation matters--a lot. The troops depend on it.

If you're going to accuse your opponent of waving the "white flag of surrender" in front of the entire country, then you had better damn well be able to back it up with foreign policy expertise. And, as expected, Palin fell far short of that mark. Instead, we were treated to more of the same clueless carelessness that has marked the last eight years of the Bush administration.

This is a woman who can accuse her opponents of cowardice, but at the same time, can't be bothered to learn the name of America's commander in Afghanistan. It's remarkably sad, and it's an insult to the troops serving there. Likewise, it denotes that same aloofness--that all-too-familiar lack of curiosity and concern for what's actually occurring on the ground in both theaters. And for those of us who've served overseas under the leadership of George W. Bush, it's a feeling we know well.