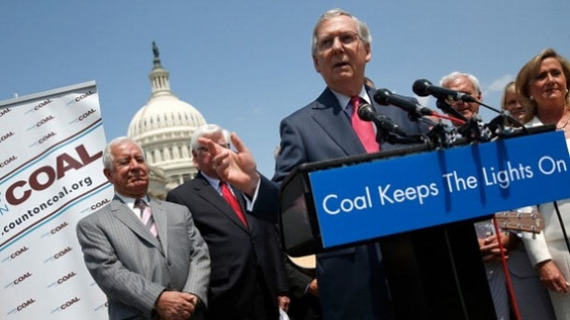 Coal companies gave Kentucky Republican Mitch McConnell more than a quarter of a million dollars during the last election cycle -- three and a half times more than they gave anyone else in the Senate -- and so far, they're getting their money's worth.

Now Senate majority leader, McConnell has been leading the charge against the Obama administration's purported "war on coal" and railing against the Environmental Protection Agency's proposal to curb power plant carbon emissions. He has called the agency's Clean Power Plan "a dagger in the heart of the American middle class" and, in a recent op-ed in the Lexington Herald-Leader, went so far as to encourage governors to refuse to cooperate with the EPA on state-specific, emissions-reduction strategies. McConnell then followed up his op-ed by sending a letter on March 20 to every governor in the United States laying out his legal argument against complying with the Clean Power Plan.

In his op-ed, McConnell repeated the same baseless claims he has been making for some time. He maintained that the carbon emissions rule is technologically unattainable. He said it would dramatically increase electricity rates across the country. And he contended it would ruin his state's economy, throwing "countless" people out of work.

"Think twice before submitting a state plan...," he advised governors and state officials. "Without your support," the administration "won't be able to demonstrate the capacity to carry out such political extremism."

Political extremism? Hardly. If anything, what the EPA is proposing is too modest.

First and foremost, the agency's goal of reducing U.S. carbon emissions 30 percent below 2005 levels by 2030 not only is technologically feasible but underestimates what can be achieved using readily available, cost-effective renewable energy sources. According to an analysis by the Union of Concerned Scientists (UCS), the EPA could nearly double the amount of renewable energy projected for its state targets, from 12 percent of total 2030 U.S. electricity to 23 percent. That alone would increase the rule's emissions reductions from 30 percent to approximately 40 percent below 2005 levels by 2030.

"The Clean Power Plan does not adequately capture renewable energy deployment rates that states are already achieving," UCS found. "The plan also fails to reflect the continued growth and falling costs of renewable energy projected by market experts. Indeed, the EPA's proposal falls short of the national renewable energy levels that the U.S. Energy Information Administration (EIA) projects would occur in 2020 under a business-as-usual approach [and] the proposal's 2030 results are only marginally higher than the EIA's projections."

Take McConnell's home state of Kentucky. According to the EIA's most recent data, about 93 percent of the state's electricity comes from coal-fired power plants. Non-hydroelectric renewable energy generates 0.6 percent. The EPA's Clean Power Plan foresees only 1.3 percent of the state's electricity coming from renewable energy in 2030.

"Based on the rates of growth that we are seeing across the country, Kentucky should be able to meet a renewable target of more than 12 percent by 2030," said Jeff Deyette, co-author of the UCS analysis. "While Kentucky doesn't have great wind resources, it does have significant solar, bioenergy and energy-efficiency potential."

In any case, the EPA plan grants states a great deal of flexibility in meeting their carbon-reduction targets, which are based on their particular situations. Kentucky's goal -- an 18 percent drop by 2030 -- is lower than that of many other states, for instance, because of its heavy reliance on coal. The state can meet that target by embracing a range of initiatives, including switching coal plants to natural gas and, as Deyette pointed out, ramping up renewables and promoting energy efficiency to dampen demand.

Despite McConnell's rates-through-the-roof rhetoric, replacing dirty, coal-fired electricity with carbon-free renewable power at worst has a marginal impact on the cost of electricity. At best, it lowers rates.

Last year, the Lawrence Berkeley National Laboratory and National Renewable Energy Laboratory published a joint cost-benefit analysis of state standards requiring utilities to increase their use of renewables by a certain percentage by a specific year. Targets currently range from 10 percent by 2015 in Michigan and Wisconsin to 33 percent by 2020 in California. Their analysis -- based on available data from 24 of the 29 states with such standards -- found the standards on average affected retail electricity rates by only 1 percent between 2010 and 2012, although there was a wide variation across states.

Deyette expects renewable standards to continue to reduce retail prices. "Most renewable energy technology costs are incurred up front," he explained. "After the equipment is manufactured and installed, the 'fuel' -- the sun's rays or the wind -- is free, which certainly is not the case with coal, natural gas or nuclear power plants. That fact helps stabilize electricity prices and provide long-term savings."

Kentucky's Economy Not Dependent on Coal

McConnell routinely blames the EPA for killing the coal industry and devastating Kentucky's economy. The EPA, he claimed in a December 2014 interview with the Associated Press, "has created a depression in my state and it's done a lot of damage to the country all across the country with these efforts to essentially eliminate coal-fired generation." And he maintains the Clean Power Plan will make things even worse. In his March 3 op-ed in the Lexington Herald-Leader, he predicted that the plan will shrink Kentucky's economy "by almost $2 billion and throw countless out of work."

Is the EPA really the boogeyman? The facts say otherwise.

To be sure, stricter pollution controls have had an impact on Kentucky coal country, but cheap natural gas, aging coal plants, and slow growth in electricity demand are a bigger headache for the industry. Automation and higher worker productivity, too, have played a major role in downsizing its workforce over the last few decades.

But the larger point is Kentucky's economy doesn't rise or fall on coal. Although Kentucky supplies 8 percent of the nation's coal -- making it the third largest coal-producing state -- coal is a relatively minor player in the economy. It's not even one of state's top 10 industries.

According to the U.S. Bureau of Labor Statistics, the coal industry employed only 11,800 workers in Kentucky in 2013, representing a mere 0.64 percent of the state's private, nonfarm working population. By contrast, manufacturers in the state employ more than 250,000 people, including more than 65,000 in the auto industry. The state's biotech and life sciences sector, meanwhile, supports more than 93,000 workers. Then there's the equine industry, and the fact that the state is the leading producer of American whiskey.

McConnell, however, likes to fixate on Kentucky's coal industry, which employs less than 1 percent of the state's workers, and pretend that it's the state's main economic driver. And that means turning a blind eye to the reality of climate change.

In that December interview with the Associated Press, McConnell was asked if the Senate has any obligation to address the growing threat of global warming.

"Look, my first obligation is to protect my people," he responded, "who are hurting as the result of what this administration is doing."

Left unsaid is what McConnell meant by "my people." Was he referring to his constituents in Kentucky, or was he talking about the coal companies -- Alliance Resource Partners, Koch Industries, Peabody Energy and Southern Company -- that bankrolled his last election?

UPDATE: This blog post was originally posted on March 18. On March 20, Sen. McConnell sent letters to every governor across the country detailing his legal argument against the EPA's Clean Power Plan. The blog post has been edited to include that new information.

Elliott Negin is a senior writer with the Union of Concerned Scientists.