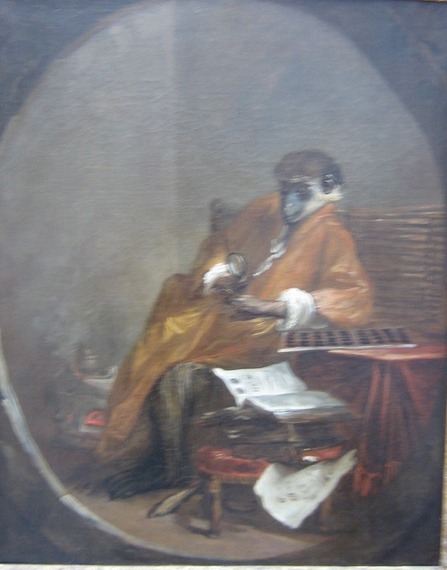 Governor Pat McCrory's Executive Order 93 doesn't fix or even put a band aid on HB 2. It does, however, address the man himself with words from the man himself. It tells us beyond any doubt that McCrory isn't now, and hasn't been, truthful.

First, McCrory claims that "With this Executive Order, the State of North Carolina is now one of 24 states that have protections for sexual orientation and gender identity for its employees." This press release can be found here. Sadly, not only is this statement just not true on a close reading of the actual order, but papers like the Charlotte Observer quickly came out with reporting saying that the executive order gave "new" and "historic" protections for state employees. That article can be found here. Rather than the "he said, she said" journalism that we see too much of today, journalists need to read the actual language of the order. The text of that order can be found here. Here is what it actually says:

Assuming "committed" has teeth in it (which I don't see), there is an obvious sleight of hand here. Sexual orientation and gender identity are only protected against discrimination, harassment or retaliation to the extent "unlawful." There is no state law making that discrimination unlawful and HB 2 took away powers of local governmental entities to outlaw such discrimination. Perhaps McCrory is referring to federal protections that might apply from time to time but if so they already existed or would apply apart from the order. Therefore, there is nothing at all new here. The executive order thus does nothing to expand such rights despite any reporting to the contrary. (Nor does it fix the new lack of a state court remedy for religious or other previously-protected classes. Similarly, where would the state remedy be for discrimination based on sexual orientation or gender identity?)

Second, Executive Order 93 shows that McCrory was not truthful back on March 25, 2016, when he posed and answered this question:

Does this bill [HB 2] take away existing protections for individuals in North Carolina? Answer: No. In fact, for the first time in state history, this law establishes a statewide anti-discrimination policy in North Carolina which is tougher than the federal government's.

At least until he pulls it down, this series of questions can be found here. In Executive Order 93, however, McCrory now admits this was not true: "I support and encourage the General Assembly to take all necessary steps to restore a State cause of action for wrongful discharge based on unlawful employment discrimination." Again, the full text of this executive order can be found here. Of course, to restore these rights, the rights had to have been taken away. McCrory did not speak the truth back on March 25.

To counter a coordinated national effort to mislead the public, intimidate our business community and slander [yes, it used this word] our great state, the governor will continue to set the record straight on a common sense resolution to local government overreach that imposed new regulations on businesses that intruded into the personal lives of our citizens. The non-discrimination policies in place today in cities like Raleigh, Greensboro and Asheville and in every business in North Carolina are the same as they were last month and last year.

This press release can be found here. Of course, we only had to read HB2 to know this was not true. Executive Order 93 now also sees the need to step in and "affirm that private businesses, nonprofit employers and local governments may establish their own non-discrimination employment policies." (I'll address this questionable language itself more below.) Acknowledging the need for clarification, where was the truth in all that stuff about slander, intimidation, and misleading the public directed at those who questioned the law?

Fourth, holding out an Executive Order as even capable of modifying contrary positions of legislation is deception of the worst sort. McCrory's role was to veto HB 2 which he did not do. We live in a democracy where the executive branch doesn't have dictatorial powers over the legislative branch. Where HB 2 prohibits it, the governor can't simply change the law stripping power from local authorities by simply affirming for example that "local governments may establish their own non-discrimination employment policies." To suggest otherwise is chilling in a government with our separation of powers. I can only imagine what Republican lawmakers would be saying if a Democratic governor had tried to do the same.

Of course, given the disingenuousness noted above, maybe he isn't actually doing this. Maybe he also intends for none of this to have meaning. Section 7 of the Executive Order also provides: "Nothing in this section shall be interpreted as an abrogation of any requirements otherwise imposed by applicable federal or state laws or regulations." Of course, in typical McCrory fashion, it's unclear what this "section" means since this sentence is in a section all by itself. Perhaps he meant instead "This Executive Order." Who knows.

I do know this, though. I am one North Carolinian who has had more than enough. This man needs to resign. He also needs to do so for his own sake. He's only going to hoist himself higher and higher on his own petard until he's beyond all hope of redemption. (Yes, I still want to hold out hope for the man. I want to do that for everyone.) I have no doubt that North Carolinians want basic honesty in their politicians even when these citizens disagree on specific issues. McCrory has forgotten our great state motto (assuming he learned it after he moved here from Ohio). North Carolinians are proud of that motto: "To be rather than to seem." Voters will no doubt remind him of it in November.

P.S. For those who might doubt what I say about McCrory's admission that HB 2 took away rights, I'm including a picture of the last page of the order. That page also includes the odd Section 7 noted above. 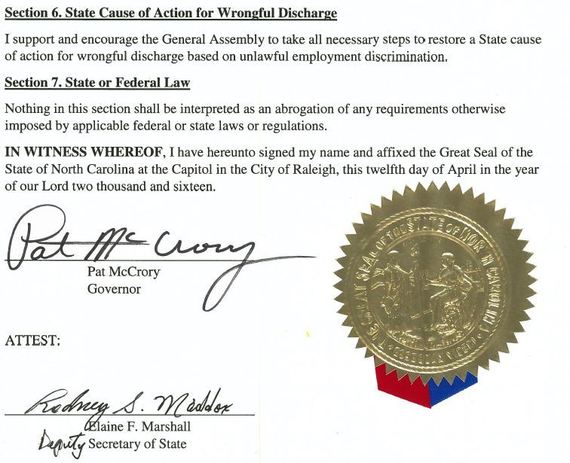