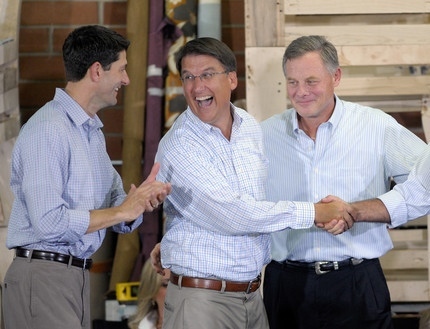 When non-lawyers hear Pat McCrory's claim that North Carolina's House Bill 2 is just common sense while at the same time they hear the Department of Justice attacking part of it as illegal, I can understand how easy it is for such non-lawyers just to take the word of the political party they prefer. They probably aren't sure where to look for the Bill and even if they know where to look they understandably might imagine the Bill has much too much legalese for them to tackle.

I want to take a minute to try to change this mindset by first noting that people can find the bill by clicking here. Pulling up the Bill shows it has five "Parts" (only one of which is about bathrooms). If you haven't yet read the Bill, please click on the link and let's take a little tour. Politicians like Pat McCrory are betting everything that you won't.

Part I (pages 1-3): This is the so-called "Bathroom Bill" and makes up only the first Part of the five Parts of House Bill 2. It regulates bathroom usage around the concept of "biological sex" which it defines as "[t]he physical condition of being male or female, which is stated on a persons's birth certificate." Oddly, this "Bathroom Part" of the Bill doesn't provide any penalties for people who ignore it. I say "oddly" because this Bill was allegedly rushed through to prevent an imminent crisis of straight men putting on dresses to view women in women's restrooms. How does it prevent this without teeth? It can't. In fact, since gender is now determined by a birth certificate, can straight male predators get life-time peeping passes by getting their birth certificates changed where jurisdictions permit that? Let's hope not. Assuming for the sake of argument that there was an imminent cross-dressing crisis, it's hard to see this toothless Part I with its birth certificate twist as any fix. If it's not any sort of fix of a real problem, Part I hardly seems worthy of expensive and potentially catastrophic litigation to defend.

Part II (page 3): This Part and the remaining parts of the Bill have unfortunately been largely ignored by the press. Let's try to fix that now. Part II jumps from bathrooms and straight men putting on dresses to the totally unrelated subjects of restricting minimum wage increases and child labor protections. This Part prohibits local governments from regulating or imposing "any requirement upon an employer pertaining to compensation of employees, such as the wage levels of employees, hours of labor, payment earned wages, benefits, leave, or well-being of minors in the workforce." On its face, this quoted language not only prevents local governments from setting a minimum wage. They're even prohibited from taking care of child labor problems they might feel are specific problems in their locality. How can this change be a good thing?

Part III (pages 3-4): Here House Bill 2 continues its attack on workers. Before the Bill, North Carolina's public policy was: "to protect and safeguard the right and opportunity of all persons to seek, obtain and hold employment without discrimination or abridgement on account of race, religion, color, national origin, age, sex or handicap by employers which regularly employ 15 or more employees."
After tweaking the old public policy protection against "sex" discrimination to discrimination based on "biological sex," Part III then effectively guts all the public policy section by providing that it "does not create . . . a statutory or common law private right of action, and no person may bring any civil action based upon the public policy expressed herein." In other words, there is no longer any state law claim for discrimination based on race, religion, color, national origin, age, sex (biological or otherwise) or handicap. What does this have to do with bathrooms? Nothing of course. Supporters of the Bill say this doesn't matter because aggrieved employees can still go to federal court. Apart from the oddness of this coming from people who tend to see the federal government as oppressor rather than savior, the claim is just false. It does matter. First, taxpayers ought to have access to the state courts they fund. Second, federal court doesn't provide the same remedies. Generally, discrimination claims must be filed within 180 days or they can't proceed in federal court. Many employees who don't know this or who can't act that fast will be left without a remedy. Additionally, federal court can be more cumbersome and more expensive. Click here for a link to the EEOC website explaining this in more detail. How can this change be a good thing?

Part IV (pages 4-5): This is what lawyers call a "severability clause" and it's a very important piece of House Bill 2. This provision provides that if any part of the bill falls, the rest will stand. The gamesmanship of House Bill 2 is no more evident than here. The business interests that pushed Parts II and III under the guise of Part I no doubt knew the problematic nature of Part I and wanted to assure that the limitations of Parts II and III would not fall if Part I falls. For the reasons given by the Department of Justice, it's very likely that Part I will fall and we'll be left with Parts II & III, the parts the lobbyists really wanted when the bill was passed. Of course, if Part I doesn't fall, it's still the toothless oddity I just described.

Part V (page 5): This part addresses the effective date of the Bill and raises interesting and troubling questions about claims existing or pending at the effective date. Those technical questions I'll leave for others to address. I feel sorry for the injured workers who have or may have lost claims because of the language of Part V. (For an explanation of why McCrory's Executive Order 93 doesn't fix the Bill, please see my earlier piece here. )

Having gone through each of these five "Parts" of House Bill 2, it's hard for me to see how a careful reading of House Bill 2 cannot deeply trouble all honest people from the most conservative to the most liberal. Since I haven't seen much written about why conservatives should oppose House Bill 2, let me end with a few words about that. Conservatives champion truth and family. There is no championing truth in supporting a bill that only pretends to solve a bathroom crisis (apart from the further issue of pretending an imminent crisis exists in the first place). Furthermore, there is no championing of family in taking away the rights of localities to protect our minors in the workplace or in limiting flexibility for better minimum wages for our families. There is no championing of family in taking away their rights to sue an employer that has treated them wrongly because of the family member's race, religion, color, national origin, age, sex, or handicap whatever a conservative might think of other categories not included in the protections we used to have. I have seen many "conservatives" thank McCrory online for House Bill 2 because they say it supports God's will. A Bill that takes away remedies for religious discrimination is not godly. It is ungodly.