WASHINGTON -- The joint fundraising committee may join the super PAC and the "dark money" nonprofit as the new face of big money in politics if the Supreme Court decides to unravel key contribution limits in an upcoming case.

A decision in favor of Shaun McCutcheon, the lead plaintiff in McCutcheon v. Federal Election Commission, to be argued Oct. 8, could vastly increase the joint fundraising committee's cash-gathering capacity.

The justices will decide in McCutcheon whether the aggregate federal campaign contribution limits -- $123,200 for a single donor in the 2014 election cycle -- place an unconstitutional burden on a donor's rights to free speech and association. In the absence of the aggregate limit, individual donors could donate to as many candidates, political party committees and political action committees as they saw fit.

Moreover, as Dan Backer, a conservative election lawyer who represents Shaun McCutcheon, explained via email, "some Members can raise more than others, and JFC’s [joint fundraising committees] help them in much the same way Leadership PACs do."

In other words, congressional leaders and presidential candidates are among the more effective fundraisers. Joint fundraising committees allow them to use their money-gathering skills to support other lawmakers in their party.

While joint fundraising committees have existed since the Federal Election Commission approved their use in a series of rulings in 1977, they have expanded dramatically in recent years. 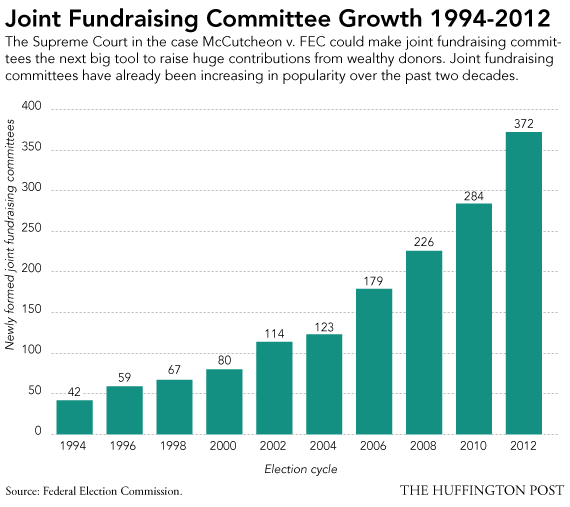 "I think it reflects a broader number of individual members with greater access to donors who can use that access to help introduce like-minded candidates to those donors that may want to support them, through the administrative vehicle of JFC’s," Backer said.

Campaign finance watchdogs warn that if the Supreme Court sides with the plaintiffs in the McCutcheon case, joint fundraising committees will become super-sized.

In the 2012 election, President Barack Obama raised the majority of his money through the Obama Victory Fund, which collected contributions for his campaign committee (Obama for America), the Democratic National Committee and 10 swing-state Democratic Party committees. However, because of the aggregate contribution limits, the victory fund could accept a maximum contribution of only $75,800 from an individual donor. Absent aggregate limits, the Obama Victory Fund could have decided to link to all state and all national Democratic Party committees and accepted checks of more than $1 million from individual donors.

Watchdogs argue that such super-sized joint fundraising committees would fly in the face of the Supreme Court's longtime justification for contribution limits -- that large contributions create the appearance of and opportunity for quid pro quo corruption.

The rise of super joint fundraising committees could also eviscerate the more general prohibition on politicians soliciting or accepting excessively large contributions in connection with elections. In 2003, the Supreme Court upheld this prohibition when it ruled against a challenge brought by Sen. Mitch McConnell (R-Ky.) to the McCain-Feingold law's ban on unlimited "soft money" contributions to political parties.

Backer said, however, that the legal paperwork and reporting requirements to link enough candidate and party committees together into a super joint fundraising committee would be so burdensome as to make this very unlikely.

"Anyone who thinks this is out of their mind and a complete idiot," he said.

The Center for Competitive Politics, a group opposed to the aggregate limits, also notes that McCutcheon is not challenging the solicitation ban directly.

Watchdogs further fear that the elimination of the aggregate limits could subvert the base contribution limits that bar a donor from giving more than $32,400 to a national party committee and $10,000 to a state party committee's federal account per year. The concern arises because the national, state and local party committees are permitted to make unlimited transfers to each other.

In the 2012 election, a number of joint fundraising committees linked to little-known state and local political parties, which then turned around and transferred the majority of that money to other political party committees. The most prominent example of this was Romney Victory, the primary fundraising committee for Mitt Romney's presidential campaign. Romney Victory was linked to the Romney campaign, the Republican National Committee, the National Republican Congressional Committee, the National Republican Senatorial Committee and the state Republican parties based in Idaho, Massachusetts, Oklahoma and Vermont.

None of those four states was seriously contested in the presidential election: Obama won Massachusetts and Vermont by more than 20 percent each, and Romney won Idaho and Oklahoma by more than 30 percent each. Instead, those state GOPs were transformed into money banks for the Romney campaign to then disperse funds to other state parties where it was needed during the presidential race.

Romney Victory linked to the non-swing-state parties for two reasons.

First, joint fundraising committees are required to create a distribution formula for dividing up an individual donor's money among the state party committees it links to (unless the donor gives his or her own distribution instructions). For example, the Obama Victory Fund took a donor's money for state parties and gave 17 percent to the Florida Democratic Party and 4 percent to the New Hampshire Democratic Party. The victory fund had to stick to that formula and to the 10 swing-state parties it linked to. It also had to make sure that the individual donor's contributions through the victory fund to a particular state party did not exceed the donor's base limit for aiding the state party.

But Romney Victory could park that same donor money in the four non-needy state parties, which could then transfer any sum to any swing-state party in need. Moreover, once an individual donor's money reached the first state party in the chain, it was no longer tied to the donor or, for all practical purposes, restricted by the base limits on the donor.

The second reason for the Romney approach is that top donors may give to state parties directly and through the joint fundraising committee. In a review of campaign finance records, The Huffington Post found that at least 55 donors to the four state parties linked to Romney Victory also gave a maximum contribution to a swing-state party that received money from the Romney Victory-linked state parties. But it can't be known if the exact checks these donors wrote to Romney Victory ultimately reached the state parties where they had already given the maximum legal amount.

What can be known is that politicians have figured out ways to sidestep the base contribution limits.

This innovation in shifting around campaign contributions demonstrates once again how candidates and parties seek to maximize the available cash and avoid the legal restrictions. If the aggregate contribution limits are eliminated in McCutcheon, politicians will surely take advantage of the opportunity to sweep up more funds.

"There is a simple maxim in American politics," said Wertheimer, "that candidates and officeholders are going to seek the largest contributions that they can legally receive."