The Supreme Court opened the door for even more money to be pumped into the political system with its Wednesday ruling on McCutcheon v. FEC, which struck down overall limits on campaign contributions.

The decision means that a single donor will soon be able to contribute millions of hard dollars -- in limited contributions -- to political parties, candidates and political action committees, according to HuffPost's Paul Blumenthal. (Read more from Blumenthal on the ruling here.)

Lee Drutman of the Sunlight Foundation wrote in October 2013 that "truly elite donors are poised to be the big winners" with this decision, with money giving them the power to "set and limit the party agendas." The Sunlight Foundation looked at a group of top donors who contributed at least $134,300 of their own money in the 2012 election and put together this chart, which shows which party is most likely to benefit from the ruling: 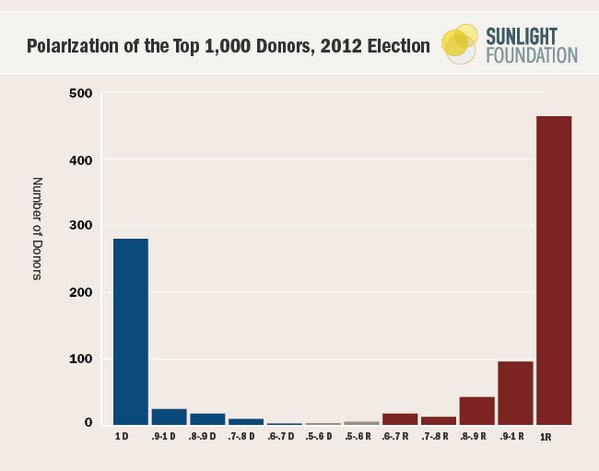 Almost 2/3 of the top 1,000 donors primarily support Republicans, suggesting the GOP is the party that will likely benefit from today's ruling. Read more on the Sunlight Foundation's October findings here.

Read the full decision below:

Here's Who Will Likely Benefit From The Supreme Court's McCutcheon Ruling, In One Graph
Supreme Court Justices