Weird things can happen to American foods that travel to France. The case in two points? Bagels and McDonald's.

It's shockingly totally possible to find a good New York-style bagel in Paris -- but they don't serve them the way they do in America, with cream cheese and lox. Instead, they use them as the containers for big sandwiches full of cold cuts and cheese, sometimes pressed like a panini. And McDonald's is wildly popular in France, but the restaurants are significantly fancier there than they are in America.

This bizarre skew make it seem almost logical that when McDonald's France wanted to follow its smash hit McBaguette with a new limited-time offering, it would try putting a burger on a bagel. The results of that madcap experiment are visible on the French McDonald's website and available in McDonald's throughout France right now. Here's a screenshot of the former: 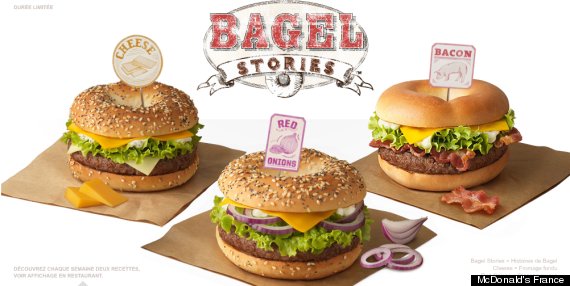 As you can see, the Bagel Burgers come in three different varieties: "Cheese," "Red Onions" and "Bacon." They go by those English titles, not the French equivalents. The website helpfully translates those first two for non-Anglophone McD's fans as "fromage fondu" and "oignon rouge," but it seems that the word "bacon" is self-explanatory. They're grouped together under the strange moniker "Bagel Stories" -- also in English -- as if adding narrative to the mix would explain how burgers met such an unlikely partner.

We haven't heard anything about these burgers coming to America, but if we do, we'll be sure to let you know.

Subway Sandwiches Around The World
More:
Foodfast foodVideomcdonalds
Newsletter Sign Up
An essential daily guide to achieving the good life
Subscribe to our lifestyle email.
Successfully Subscribed!
Realness delivered to your inbox