McDonald's might finally have figured out that paying its low-wage workers more would actually be a good thing for McDonald's.

McDonald's CEO Don Thompson recently suggested his company would support a bill, proposed by President Barack Obama, raising the federal minimum wage to $10.10 an hour from $7.25. Such a wage hike likely wouldn't satisfy his workers, some of whom recently stormed the company's Oak Brook, Ill., headquarters demanding $15 an hour. But it would be a noticeable shift in attitude for the world's biggest restaurant chain, which has so far been neutral as the debate about higher wages has roiled around it.

"You know, our franchisees look at me when I say this and they start to worry: 'Don, don't you say it. Don't you say we support $10.10,'" Thompson said during a little-noticed talk at Northwestern University's Kellogg School of Management last month, according to a Chicago Tribune report. "I will tell you we will support legislation that moves forward."

Thompson, who made $9.5 million last year, has been on the defensive about worker pay since at least last July, when the news media discovered McDonald's had a financial-advice website for its employees (no longer available) recommending they get second jobs and not turn on their heat. 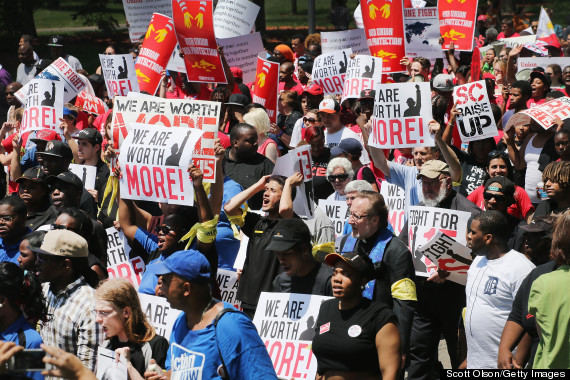 Thompson has insisted that his company pays more than minimum wage. And various estimates put the median McDonald's worker's wage at between $8 and $9 an hour.

But even at $9 an hour, which amounts to about $19,000 per year, the typical McDonald's worker would have to work two months just to make what Thompson makes in one hour (about $3,200, assuming he works 60 hours per week and 50 weeks per year).

This is Ground Zero of the income inequality debate. Soaring CEO pay plus stagnant wages -- the federal minimum wage should really be $22 an hour, adjusting for productivity gains and inflation -- in an economy creating mainly low-paying jobs, equals rising inequality.

Those on the conservative side of the debate complain that raising the minimum wage will cause companies to lay off workers and/or jack up prices, hurting the economy. Thompson shot holes in that argument, at least as it concerns a raise to $10.10 an hour.

"McDonald's will be fine," he reportedly told Northwestern. "We'll manage through whatever the additional cost implications are."

In fact, McDonald's might do better than just "manage" under a higher minimum wage. As Joe Cahill of Crain's Chicago Business recently pointed out, Thompson has bemoaned the effects of poorer customers not having enough money to buy stuff. A national minimum-wage hike could put more money in the pockets of low-wage workers across the country, meaning more money for people to spend at McDonald's.

McDonald's did not immediately return a request for comment.

What Don Thompson said at Kellogg reflects our existing position on this important and evolving issue: an increase in the minimum wage would primarily affect McDonald's independent franchisees, who would have to factor into their business models the additional expenses and the potential impact on prices and hiring decisions. As such, McDonald’s, and our independent franchisees, believe that any increase should be implemented over time so that the impact on small and medium business owners is manageable. Additionally, we believe that any increase needs to be considered in a broad context, one that considers, for example, the impact of the Affordable Care Act and its definition of “full time” employment, as well as the treatment, from a tax perspective, of investments made by businesses owners.”