The award-winning documentary "Super Size Me," about a man who ate only McDonald's meals for 30 days, shook up the fast food industry when it came out in 2004. The film chronicled activist and filmmaker Morgan Spurlock's alarming physical and emotional deterioration after averaging about 5,000 calories of McDonald's food a day.

After 30 days, he gained 24.5 pounds, while his cholesterol level shot up 65 points. Shortly after the film debuted, McDonald's discontinued its "Super Size" portions (part of Spurlock's experiment included super-sizing his meal whenever offered by an employee) and began putting more fruits and vegetables on the menu, although reps denied that the changes had anything to do with the "Super Size Me" film.

Now, almost 10 years later, a high school biology teacher in Iowa named John Cisna is making the news with his own story about how eating McDonald's every day for breakfast, lunch and dinner helped him lose weight. The twist? Instead of simply trying every single meal on the McDonald's menu at least once like Spurlock did, Cisna relied on three students to carefully plan a menu of McDonald's food that added up to only 2,000 calories a day and adhered to 15 nutritional guidelines as recommended by the Food and Drug Administration. For exercise, Cisna walked briskly for 45 minutes, four to five times a week.

Cisna's students used the McDonald's meal planner feature to map out three meals a day, while local franchise owners covered the cost of the food. Here's one sample menu:

Toward the end of the 90-day experiment, Cisna threw his students a curve ball: They had to start letting him eat the restaurant chain's more high-fat, high-sodium options, such as Big Macs, Quarter-Pounders and Double Cheeseburgers.

"I didn't want people saying I lived off fruit parfaits and Egg White Delights," explained Cisna in a phone interview with HuffPost. Plus, he said, he wanted to add an extra challenge to the project. His students quickly found that they couldn't keep him at 2,000 calories while still fulfilling the 15 nutritional guidelines, and chose to sacrifice his calories instead of his daily recommended nutrients. On days he indulged in a Big Mac or similar sandwich, his daily caloric intake dipped to 1,700 - 1,800 calories.

By the end of the 90-day project, Cisna lost 37 pounds from his 280-pound frame, and his cholesterol came down 79 points. But beyond the weight loss, he's thrilled that the experiment seems to have changed the consciousness of students at Colo-NESCO High School, where he teaches.

"What is cool is when you see one kid say, 'It's not McDonald's that makes you fat. It's your choices that make you fat,'" Cisna said. "That right there is when we knew that the kids understood." 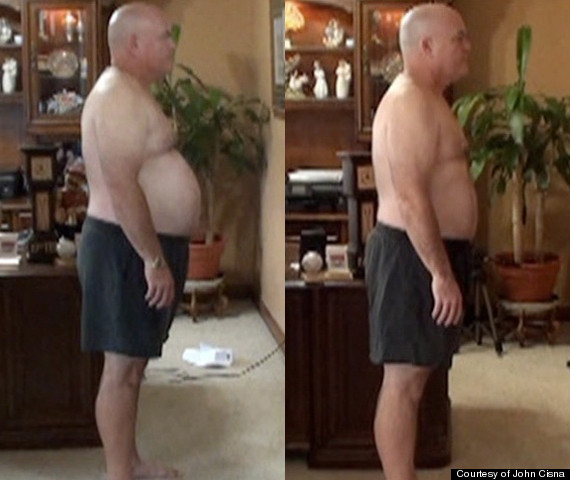 Before and after photos of John Cisna.

But just because Cisna lost weight eating only McDonald's, does that mean nutritionists will be recommending his McDiet any time soon? Not so fast, said NYU professor and nutritionist Lisa Young, Ph.D., R.D., C.D.N., who is also the author of the book "The Portion Teller Plan." Young, who actually appeared in the "Super Size Me" film to explain the evolution of fast food restaurant meal sizes over the years, says it's not surprising that Cisna was able to lose weight.

"You could lose weight any way you want as long as you eat less and you're conscious," said Young. "I think in this case what was happening is he was aware of the total amount that he was allowed, and I think that is what helped him lose weight." In other words, Cisna was simply using portion control to lose weight.

It's also no shock to find that there are many not-as-bad-for-you items on the menu at McDonald's, she added. The problem, said Young, is that most people who walk into a McDonald's restaurant don't have the discipline (nor the figurative weight of students counting on them for a school project) to resist ordering high-calorie foods.

"Sure, you could get a healthy thing," Young said, "but when you go to a place where the temptation of fries and soda and cheeseburgers are all over the place, it may not be so easy." Also, unlike Cisna, whose meals were subsidized by franchise owners, McDieters could be stymied by the expense of constantly eating out.

In addition, McDonald's newer, "healthier" choices leave a lot to be desired, and can sometimes even be worse for you than their traditional offerings. According to Mcdonald's nutrition information, the Bacon Ranch Salad with crispy chicken and ranch dressing, for instance, is 570 calories and contains 1,400 milligrams of sodium and 36 grams of fat -- 58 percent and 56 percent of one's recommended daily allowance, respectively. A Big Mac, on the other hand, is 550 calories and contains 29 grams of fat and 970 milligrams of sodium.

While Cisna's McDiet might seem to be working for now, the sustainability of his approach is unproven, concluded Young. And when it comes to weight loss, a sustainable diet is key to making the changes (and the weight loss) last for a lifetime. Indeed, Cisna has lost significant amounts of weight with Weight Watchers and Jenny Craig in the past, but was never able to maintain the loss.

Bottom line? "I wouldn't go out and advocate the McDonald's diet just yet," said Young.

Cisna, on the other hand, is excited about the McDonald's diet and thinks that the experiment has taught him lifelong, healthy portion control habits -- despite the fact that his students planned all his menus and a restaurant cooked the meals for free. He also thinks that because of their global reach, McDonald's has a lot of potential to solve the health care crisis related to overweight and obesity.

We congratulate John Cisna on his weight loss and improved overall health, and we are pleased he was able to accomplish his goals by making balanced choices, which included many of his favorite McDonald’s menu items. Like Mr. Cisna, many of our customers are looking for ways to find balance in their diets and make informed choices. As a registered dietitian nutritionist, I believe a variety of food and beverage choices can be a part of an active and balanced lifestyle. That’s why, we remain committed to providing our customers with more wholesome choices and increasing access to nutrition information.

As for Cisna, he's continuing the McDiet for another 90 days, while adding weight-lifting, jogging and basketball games to his brisk walking routine. While he's never been tempted to cheat on the menu (he had a Filet-O-Fish meal for Thanksgiving last year), he did admit he was looking forward to the day he would eat a non-McDonald's meal.