McDonald's is hoping to stress the healthier aspects of its menu with a new effort that regroups low-calorie offerings in a "Favorites Under 400 Calories" category.

The measure, which rolls out Tuesday, is timed to coincide with the 2012 London Olympics. To encourage would-be healthy diners, some of the lower calorie items carry instant-win pieces for the fast food chain's "Win When the U.S. Wins Gold” promotion, which begins the same day. Prizes include a trip to London for the closing ceremonies, video games, a camera and even $25,000 in gold coins.

The Chicago Tribune reports that the boards will be organized by calorie counts, in calorie blocks:

McDonald's USA chief marketing officer, Neil Golden, told the paper that he and the company "want customers to understand that they have food that they love, but food that they can feel good about enjoying regularly."

The measure will be implemented in the shadow of many critics' concerns regarding McDonald's title sponsorship of this year's Olympics games. Several doctors, lawmakers and health advocates in the UK and elsewhere worry that a fast food company is the wrong face for an event celebrating fitness.

The London Assembly has since called for a ban on sponsorships from McDonald's and soft drink giant Coca-Cola.

Such outrage, however, has not stopped either company. McDonald's plans to go ahead with the July 28 opening of its largest store ever, which will serve classic offerings for six weeks during the games.

The move to emphasis low-calorie offerings comes as the Food and Drug Administration finalizes measures that will require restaurants with 20 or more locations to disclose calorie counts on menus and drive-thrus.

Take a look at McDonald's "Favorites Under 400 Calories" menu below: 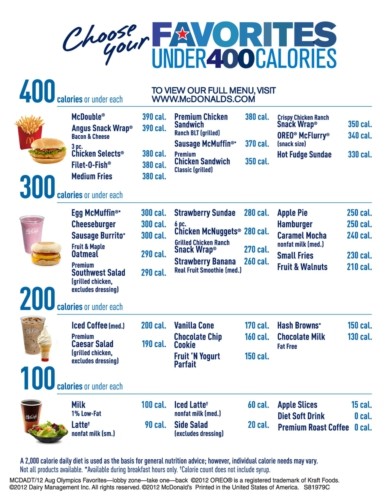