McDonald's workers struggling to get by on poverty wages should apply for food stamps and Medicaid.

That's the advice one activist McDonald's worker received when she called the company's "McResource Line," a service provided to McDonald's workers who need help with issues like child and health care.

"You can ask about things like food pantries. Are you on SNAP? SNAP is Supplemental Nutritional Assistance [Program] -- food stamps ... You would most likely be eligible for SNAP benefits," a McResource representative told 27-year-old Nancy Salgado, who works at a Chicago McDonald's. "Did you try and get on Medicaid? Medicaid is a federal program. It's health coverage for low income or no income adults -- and children."

Salgado is one of many fast-food workers who have walked off the job in recent months to protest the industry's low wages, part of a nationwide movement aiming to raise pay to $15 an hour. She has worked at McDonald's for 10 years, and earns $8.25 an hour in her current job as a cashier. Earlier this month, Salgado was detained after pressing McDonald's President Jeff Stratton for higher wages.

"Do you think this is fair that I have to be making $8.25 when I've been working at McDonald's for 10 years?" Salgado said during the confrontation.

The audio of Salgado's call to the McResource Line was posted Thursday on YouTube by advocacy group Low Pay Is Not OK. In the call, the McResource representative points the worker towards government assistance when she explains she needs help.

The YouTube version of the call is edited, but Low Pay Is Not OK provided a fuller recording to The Huffington Post. In the longer version of the audio, the McResource representative tells Salgado that because she's employed by a McDonald's franchise, which does not pay for the McResource service, she is not eligible for consultation. Still, the representative goes on to offer advice, including recommending that Salgado reach out to resources like the Low Income Home Energy Assistance Program.

McDonald's pointed out to The Huffington Post that the audio is clearly edited. “This video is not an accurate portrayal of the resource line as this is very obviously an edited video," Lisa McComb, McDonald's' director of U.S. media relations, told The Huffington Post.

"The McResource line is intended to be a free, confidential service to help employees and their families get answers to a variety of questions or provide resources on a variety of topics including housing, child care, transportation, grief, elder care, education and more," McComb said. 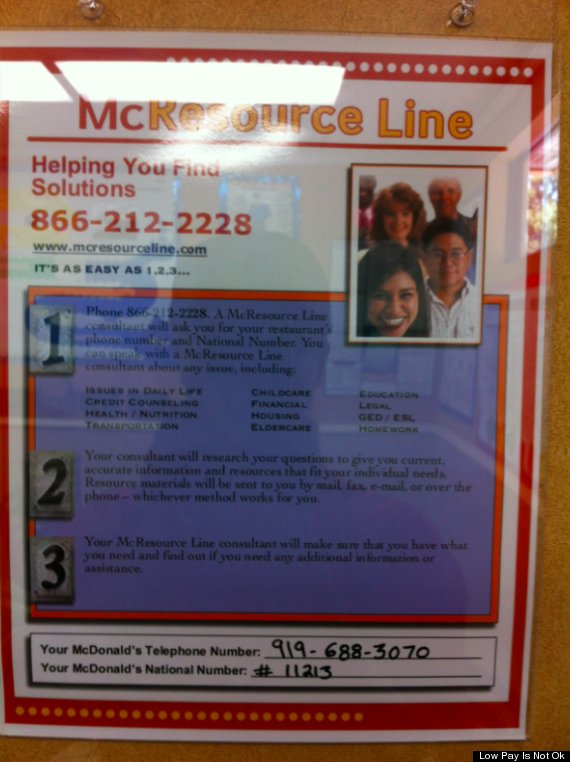 A flier for the McResource line that hung a break room at a McDonald's restaurant, according to a representative from the advocacy group, Low Pay Is Not OK.

"It made me mad [that I couldn't get help from the McResource line] because I thought that all the McDonald's employees qualified for it," Salgado said in a phone call with HuffPost Thursday. McDonald's did not clarify what percentage of its workers do qualify for its consultation services.

More than half of fast-food workers rely on public assistance, a reality that costs taxpayers more than $7 billion a year, according to an estimate from the National Employment Law Project published last week. McDonald's low wages cost taxpayers about $1.2 billion annually, the study found.

McDonald's announced on Monday that it earned $1.5 billion in profits in the third quarter, which is a 5-percent jump over last year.

"McDonald’s and our independent franchisees provide jobs in every state to hundreds of thousands of people across the country. Those jobs range from entry-level part-time to full-time, from minimum wage to salaried positions, and we offer everyone the same opportunity for advancement,” she wrote.

"We're working for one of the richest employers," Salgado said. Their response to her inquiry, she added, shows that they admit they don't pay their workers enough to get by.

McDonald's Tells Worker She Should Sign Up For Food Stamps
10 Things The Fast Food Industry Doesn&#039;t Want You To Know