J. Kenji Lopez-Alt of The Food Lab at Serious Eats has completed a rigorous experiment to determine whether the example below and other instances online of rot-free McDonald's burgers are unique to McDonald's food, unique to fast food in general, or if the non-rotting is so unexceptional that most any burger in the right open-air environment would also petrify rot-free. Turns out, the un-decayed burger is not unique to McDonald's at all: in a head-to-head experiment with multiple samples, J. Kenji Lopez-Alt learned the following:

Turns out that not only did the regular McDonald's burgers not rot, but the home-ground burgers did not rot either. ... What does this mean?

It means that there's nothing that strange about a McDonald's burger not rotting. Any burger of the same shape will act the same way. The real question is, why?

Well, here's another piece of evidence: Burger number 6, made with no salt, did not rot either, indicating that the salt level has nothing to do with it.

The burger doesn't rot because it's small size and relatively large surface area help it to lose moisture very fast.

Check out the whole experiment here.

Sally Davies, a New York-based photographer -- and decades-long vegetarian -- took a McDonald's Happy Meal home six months ago to see if what she had read online about a school teacher with a 12-year-old McDonald's burger could possibly be true (spoiler alert: it is). Davies' friend claimed the food would mold or rot within 2-3 days and that the story of the 12-year-old burger was nothing more than a tall tale.

Davies described it from there to the Huffington Post:

I planned to photograph the decomposing burger every day to monitor the process, and send to my friend! I started a page on Facebook called "McDonalds Happy Meal Project" and also on Flickr posting all the photographs. After a week or two, the photographs were very boring, as nothing was happening. at all. So I only photograph them every week or two after that. Not much has changed since April 10, 2010 on Day one. The top bun is very dry and a small part snapped off. The burger shrank as it dried out, but nothing much else. ...

McDonalds says I must have altered the food in some way. I have not.

As Refinery29 wrote when they covered the project at the 137-day mark, "the results are remarkable in the fact that they're really unremarkable." The Daily Mail referred to the "seemingly indestructible fast food meal's progress as it refuses to yield to the forces of nature."

The Happy Meal stopped smelling of anything after only a couple days, and the only change that really seemed to occur was that it essentially plasticized. "At six months old, the food is plastic to the touch and has an acrylic sheen to it. The only change that I can see is that it has become hard as a rock," Davies told the Mail.

Davies, whose art is in the collections of Sarah Jessica Parker, Tim Burton, Johnny Depp and Dan Ayckroyd, notes that she wasn't trying to specifically go after McDonald's and has no reason to believe this phenomenon is exclusive to their food. "Although I used a McDonalds Happy Meal for this project, it could have been any other fast food," she says. "It just happens that McDonalds is close to where I live."

What follows is the progression of Davies' Happy Meal photos, starting with Day One, and ending with the six-month mark at Day 180.

Davies appeared on a Good Morning America segment this morning about the 6-month old Happy Meal: 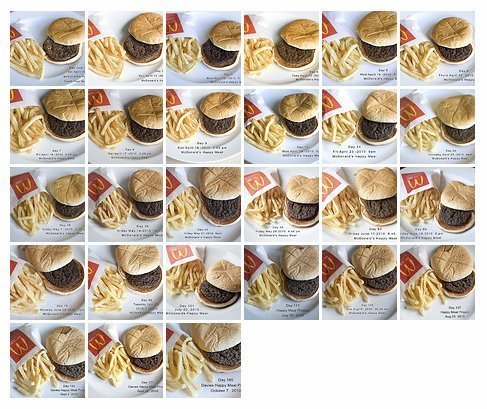 "McDonald's menu items are freshly prepared in our restaurants. It is not possible to provide a detailed explanation regarding these claims without knowing the conditions in which these food items were kept. That said, we strongly caution anyone from jumping to conclusions.

McDonald's hamburger patties in the U.S. are made with 100% USDA-inspected beef. They are cooked and prepared with salt, pepper and nothing else - no preservatives - no fillers. Our hamburger buns are made from North American-grown wheat flour. Our world-famous French fries are made from potatoes and cooked in a canola-oil blend. These are the same foods that consumers buy every day in their local grocery stores - bread, meat and potatoes.

Bacteria and mold only grow under certain conditions. For example, without sufficient moisture - either in the food itself or the environment in which it is held - bacteria and mold and associated decomposition, is unlikely. If food is/or becomes dry enough, it won't grow mold or bacteria. In fact, any food purchased from a restaurant or grocery store or prepared at home that lacks moisture would also dehydrate and see similar results if left in the same environment.

McDonald's food safety and quality standards are among the highest in the industry. McDonald's sources its ingredients from approved suppliers that adhere to strict standards for food safety and quality, including a controlled, well-maintained and clean environment throughout our entire supply chain. Together with stringent procedures for handling and storage, we work hard to minimize any exposure that would contribute to the presence of mold, bacteria or other microorganisms."