McDonald's has begun testing a Sriracha Big Mac burger in the Columbus, Ohio, market, the same location for the earlier test of the Mac Jr. And Grand Mac that it will introduce nationally in early 2017.

In addition to having exclusive access to a Sriracha Big Mac, Columbus diners can order Sriracha Mac Sauce on any item on McDonald's menu and/or get the spicy sauce in a mini tub for dipping fries or Chicken McNuggets.

"We're always trying new creations and we wanted to innovate with an on-trend flavor like Sriracha to give our customers in Columbus a new and exciting taste," McDonald's Chef Mike Haracz said in a statement announcing the test. 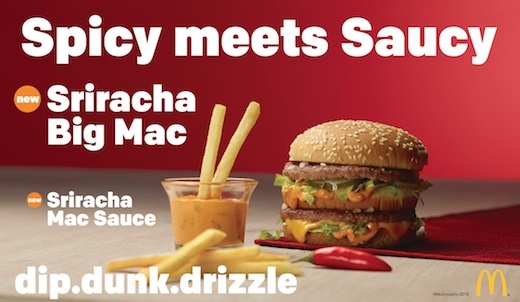 This is the first time McDonald's has tried Sriracha Mac Sauce on the Big Mac itself, but it continues a love-affair with sriracha that began in early summer, as BurgerBusiness.com has documented:

I speculated then that McDonald's might be eying taking bottled Mac Sauce to supermarket shelves--as it did with McCafé coffee--and I still think that's a reasonable possibility.