It may be a sign of the troubles and doubts that have beset McDonald's that its desire for a noteworthy jalapeňo burger has been scaled back to the new $2 Jalapeňo Double burger (below). This addition to the Dollar Menu & More has been spreading to McDonald's menus across the country and seems destined to be proclaimed a national product any day now. 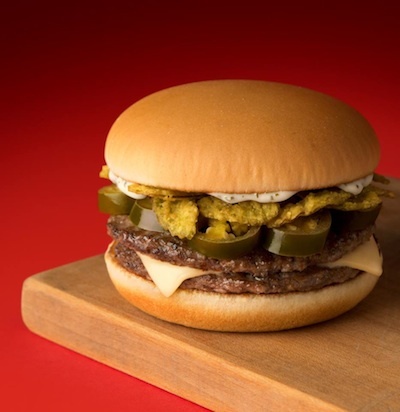 Last November the chain had a more ambitious, more "premium" vision of a spicy line in test. The Jalapeňo Kicker line included a Quarter Pounder version (below), a Premium Chicken version and even Jalapeňo & White Cheddar Cheese McMuffin and Biscuit breakfast sandwiches. But that was just as McDonald's was coming to grips with the truth that its menu was overloaded and overcomplicated. In the end, the chain didn't pull the trigger on a Jalapeňo Kicker launch. 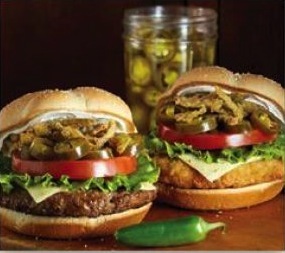 Instead it is rolling out this $2 junior version that resembles the pricier precursor. Marketing materials described the Jalapeňo Kicker Quarter Pounder as having "cream cheese sauce, jalapeño pepper Jack cheese, crunchy jalapeño crisps, pickled jalapeño slices, farm fresh tomato and a crisp lettuce leaf." The new Jalapeňo Double is close (Dollar Menu burgers rarely get lettuce and tomato), described as "two beef patties, white Cheddar cheese, jalapeno aïoli, and both pickled and crispy jalapeňos. A must have for those of you that like a little kick in your sandwich!"

During last week's quarterly conference call with analysts, "value" was the first of four "foundational elements" that CEO Don Thompson said the brand is strengthening (the others are operations/service, marketing and simplification). On value he said that McDonald's is "evaluating the relationship between pricing and quality perception across our menu board and that's because value is one of our grand pillars. So we must continue to fortify our position within this key consumer attribute."

McDonald's has been leaking customers from higher-income households (Chipotle hardly has a strong inner-city presence). The downgrade from a pricy Jalapeňo Kicker Quarter Pounder to a $2 Jalapeňo Double is an important nod to the budget-conscious diners who continue to be the brand's bedrock. That's not to say McDonald's won't try to recapture those who buy premium-price burgers, however. The "build-you-own" customization option it is testing is one such lure to those higher-income diners. In the end, as always, McDonald's will try to have something for every subset of its clientele.