McDonald's Corp. already is test marketing its McCafé bagged coffee in U.S. supermarkets. And the test goes well beyond the ground Premium Roast coffee it has sold in Canada since late 2012.

On Monday I suggested that the current McCafé coffee-sampling promotion might be a prelude to testing of bagged McCafé coffee at retail. McDonald's and Kraft Foods Group said last year that testing would begin in 2014. But I have since learned that retail sales already have quietly begun in selected locations.

One is the Wegmans supermarket in Mechanicsburg, Pa., near Harrisburg, where McDonald's McCafé brand is currently well represented on the coffee aisle. But in addition to ground Premium Roast McCafé coffee, ground Breakfast Roast, French Roast and Decaf Premium coffees are offered. For those who like flavored coffee, a vanilla-flavored Premium Roast is available. 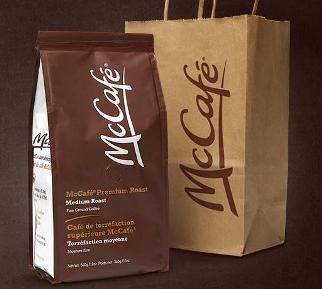 But McDonald's also is testing interest in single-serve cups, too. Premium Roast, Decaf and Vanilla McCafé blends are offered at Wegmans in K-cups®. At the Wegmans in Mechanicsburg, 12-count boxes of single-serve McCafé cups are priced at $7.49. As reported here previously, researcher Mintel says the single-serve-pod market was worth $3.1 billion in the U.S. last year and could account for 50 percent of coffee sales by 2018. The total coffee market was valued at $11.7 billion, according to MarketWatch.

McDonald's Corp. did not respond to a request for comment on McCafé testing, so I can't say in how many markets or at what price points McCafé currently is being offfered. It is not available in all Wegmans markets, according to sources, but other grocery chains and other cities no doubt are involved.

In 2010, McDonald's CEO Don Thompson said coffee accounted for more than 6 percent of its U.S. sales. That share may since have increased, but even 6% of the chain's 2013 domestic sales would be $2.15 billion. Coffee is an important product to McDonald's.

Earlier this month, Starbucks unveiled four new breakfast sandwiches inspired by the La Boulange bakery it acquired. And Starbucks is an obvious coffee power. But I think the competitor McDonald's is more carefully watching is Dunkin' Donuts, which also has coffee and food credibility with consumers. In its 10-k SEC filing, Dunkin Brands claims that, "According to Nielsen, for the 52 weeks ending December 28, 2013, sales of our 12 oz. Original Blend [coffee], as expressed in total equivalent units and dollar sales, were double that of the next closest competitor" at retail.

Dunkin' enjoyed a 3.5 percent same-store sales gain last year while McDonald's U.S. comp sales declined by 0.2 percent. Earlier this year, Dunkin' Brands President of Global Marketing & Innovation John Costello told analysts, "We have learned that the Dunkin' brand has permission to go into almost any category as long as it falls into being great food at a great value in a fast, friendly and convenient environment." Given all the competitive activity, McDonald's Corp. undoubtedly wants to establish McCafé coffee at retail as soon as it can.