McDonald's has added "Signature Crafted" to its portfolio of available terms for upscale burgers, a group that already included "Chef Crafted and "TasteCrafted." The chain filed a federal trademark registration for "Signature Crafted" on Dec. 9, 2015.

"TasteCrafted" was first used by McDonald's in April 2015 for a customization platform smaller in scope than the "Create Your Taste" and tested by the Central Coast of California co-op (north of Los Angeles, from Santa Barbara to Paso Robles) and a few Oregon markets. Diners picked beef or grilled or fried chicken as their protein, chose one of three bun choices (artisan roll, sesame-seed bun or potato roll) and then selected one of four toppings packages (below). These are Bacon Clubhouse (bacon grilled onions), Pico Guacamole (guacamole and pico de gallo), Hot Jalapeňo (jalapeňo slices, pepper cheese and tomato) and Deluxe (red onion, tomato and lettuce). 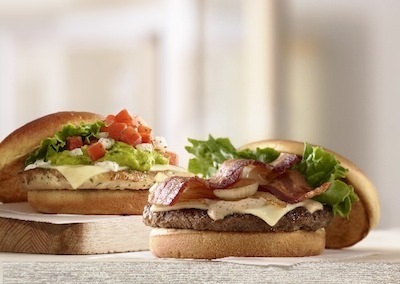 At the beginning of this month, McDonald's extended the test to 600 restaurants across Southern California, reverting to the Taste Crafted (now two words) name. Curiously, local media covered Taste Crafted as though it were new to McDonald's rather than just new to Southern California. It isn't new at all. The four toppings combos (below) are the Pico de Gallo, Buffalo Bacon, Maple Bacon Dijon and Deluxe builds tested elsewhere. The table service component isn't new either since it dates at least to the Create Your Taste kiosk ordering system in McDonald's across the country. 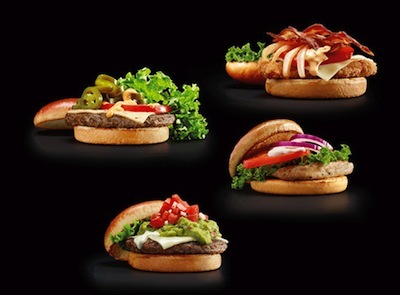 Now comes "Signature Crafted." McDonald's traditionally responds to queries about trademarks with the cautionary admonition that the chain trademarks many terms, without necessarily using them. But the last term it had trademarked was "McPick" for which a trademark registration was filed on Nov. 17, 2015. McPick is the name for McDonald's new discount program. In test it has offered items as "McPick 2 for $5" or "McPick 2 for $2."

McDonald's has used the "Signature" term recently both in the U.S. and overseas. As reported here, the chain tested a "Signature Burger Mini Meal" in Southern Wisconsin earlier. The deal offered a double-patty Signature Burger, small fries and soft drink for $4.69 as one of several discounted combos. 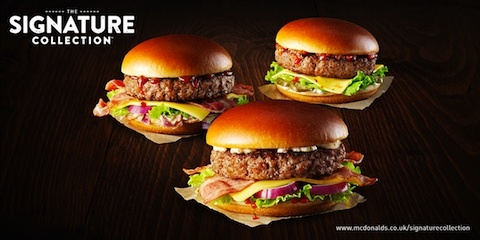 In the UK, McDonald's last month began testing "The Signature Collection," a trio (Classic, BBQ and Spicy) of high-end, "thicker" burgers on brioche buns in distinctive black packaging. The burgers (above) initially were offered in just 28 stores but the company said in a release that it "is set to roll out across the country next summer when the Signature Collection will become a permanent item on the menu in around 400 restaurants already refurbished as part of the ongoing 'Experience of the Future' transformation programme."

So..."Signature Crafted" could become the name for line of thick, top-priced burgers as in the UK and Switzerland, could be the new name for the Taste Crafted platform or could be something completely different. Sit tight; 2016 should be interesting.