"Have it your way" is Burger King's longtime slogan but McDonald's is testing build-your-own-burger customization and new premium-price burgers in Southern California, according to an article by Nancy Luna in the Orange County Register (OCR).

At a recently remodeled restaurant in upscale Laguna Niguel, Calif., south of Los Angeles, McDonald's waitstaff in black or in white chefs aprons welcome customers at the entrance. The restaurant offers three new high-price specialty burgers as well as the option to choose custom toppings from the list on an iPad menu. The OCR reports that the test is taking place in an Illinois McDonald's as well.

The BYO and specialty burgers -- the SoCal Style, Hot All Over and Grill Thriller -- all use the regular Quarter Pounder patty but are priced at $5.79. That takes McDonald's up to fast-casual pricing: a 7.5 oz. BYO burger at fast-casual chain Smashburger is $5.99. 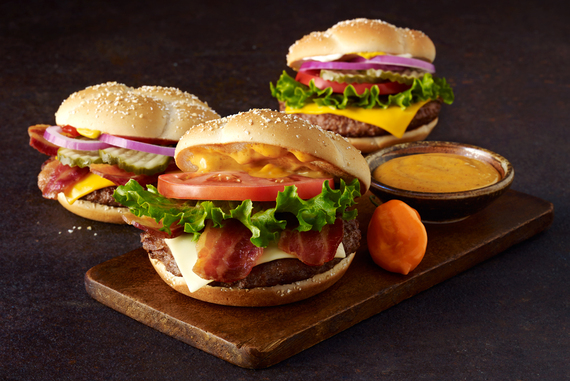 The OCR says the options include more than 20 toppings and sauces, such as white cheddar, guacamole, caramelized onions, grilled mushrooms, creamy garlic sauce and applewood-smoked bacon. Other than guacamole, these seem to be foods it has on hand for other menu items (for example, the garlic sauce is sued in the Chicken & Bacon McWrap). Some are used with the new Quarter Pounders (shown above) that inherited toppings from the discontinued Angus Third Pounders.

Tray liners promote the burgers as "Real. Freshly Grilled. One of a Kind," the OCR says.
A McDonald's spokesperson told the OCR that the test allows it to hear from customers "what they expect from McDonald's in terms of the overall restaurant experience and their ability to further customize their menu choices." In other words, "Will our customers give us permission to go to BYO and $6 burgers?" Maybe. They've recently said OK to chicken wings but always have turned thumbs down on attempts to sell pizza.

I'm sure the same folks who obsessed whether Burger King's Big King is a "rip off" of the Big Mac will choose to see the BYO test as copycatting BK's slogan or cloning the many fast-casual and casual-dining concepts that offer customization. These include chains such as The Counter (and its new Built fast-casual spinoff) , Smashburger, Fuddruckers, Bagger Dave's Burger Tavern, Bad Daddy's Burger Bar and many more. BYO customization is central to many of the upscale independent burger-bar concepts such as Southern California-based Slater's 50/50. Why shouldn't the Golden Arches try it?

McDonald's and other restaurants are having trouble increasing customer traffic. One obvious remedy to that (if you want to grow) is to build the average check with customers you have. The BYO test looks to me like an exercise in check-building.

There's research that says McDonald's is smart to offer BYO customization: Technomic's latest Burger Consumer Trend Report finds that 64 percent of the 653 adults polled say it's important to be able to customize toppings on their burger. That's up from 55 percent in a similar study just two years ago. Additionally, 64 percent called build-your-own-burger concepts "highly appealing."