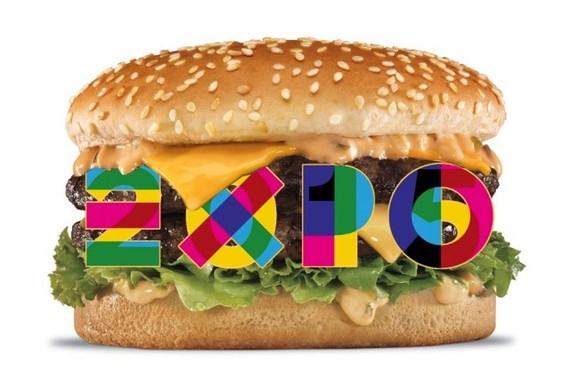 Things are heating up in Milan between McDonald's and Slow Food, I realized by reading a very interesting Facebook post from my former student and now friend Federico Iavicoli, founder and owner of Spasso Food, a street-food inspired take-away store in Rome. Federico was commenting on the controversy that exploded during the Expo 2015 in Milan, Italy, whose theme is "Feeding the Planet, Energy for Life." Countries, institutions, organizations and businesses from all over the world have built pavilions that showcase - or are supposed to - what's happening in terms of food, sustainability, and innovation at the global level. (Disclaimer: I have been an adviser for the U.S. pavilion).

It all started on May 19 when, on the occasion of the grand opening of the Slow Food pavilion, Carlo Petrini, its founder and president, critiqued the organization for the presence of participants as different as Slow Food and McDonald's. "In front of those who sell meat in a bun for 1.20 euro, how do you explain the value and the prices of those who raise and produce according to certain criteria?" he was reported saying during his address. Slow Food's goal, as stated on its website, is to "ensure everyone has access to good, clean and fair food," while preventing the disappearance of traditional food cultures and traditions.

According to the Italian newspaper La Stampa, McDonald's retort came quick through a press release: "We wonder why those who proclaim the importance of biodiversity do not agree on the idea of diversity of supply, and especially do not demonstrate respect for people's freedom and ability to choose... We are pleased and proud to serve 6,000 affordable meals of good quality at the Expo, with ingredients that come from Italian farmers... Thousands of people chose us freely, maybe after passing to visit the immense, sad and little known Slow Food pavilion."

The terms of the controversy are complex: McDonald's refers to the consumers' individual choices as an expression of freedom and autonomy - an argument that the company has used when accused of contributing to health problems among its customers. Moreover, in this specific case, it presents itself as new and fun against the supposedly stuffy and elitist approach embraced by Slow Food. The rhetorical move to equate biodiversity to diversity of supply is daring but effective.

Moreover, McDonald's touting of the affordability of its offer resonates powerfully in Italy, where many are reeling under the hardships imposed by a long and apparently unbeatable economic crisis and may not be particularly amenable to reflecting on complex food system issues.

The question of the local procurement of ingredients, which McDonald's emphasizes in its Italian operations, had already become a matter of disagreement between the company and Slow Food in 2010, when the then-Minister of Agriculture Luca Zaia approved of the launch of McItaly sandwiches that featured Italian mainstays such as artichokes and asiago cheese and - so the minister claimed - would support Italian rural production. On that occasion, Carlo Petrini observed that McDonald's had not dealt with the issue of fair payment for food producers, which he argued should be as important to the company as the origin of the ingredients it buys.

The discussion is destined to continue. After all, Slow Food developed in part as a response to the opening of McDonald's outlets in Italy in the late 1980s. And the flexibility that the fast food company has demonstrated in expanding its business in Italy - as well as the efficacy of its communication strategies - indicates the importance it attributes to its presence and success in the Mediterranean country, especially at a time when its sales are suffering at home.